Famed video game company Capcom is charging into the movie business with a vengeance. Today during NYCC they confirmed the development of two movies based around their properties….one on Monster Hunter, the other on a familiar-looking blue robot.

There will be a Mega Man movie! Capcom said the project “aims to appeal to a diverse audience, including not only game players but action movie fans as well, with an adaptation that maintains the world of the Mega Man games, while incorporating the grand production and entertainment value that Hollywood movies are known for.”

According to Capcom, the Mega Man movie will be written and directed by Henry Joost and Ariel Schulman (previously behind Nerve). Chernin Entertainment will co-produce alongside Masi Oka (the Heroes guy? Yes, the Heroes guy).  The movie is described as live-action, but frankly we don’t really see how. Surely Capcom doesn’t want Mega Man to look like this again: 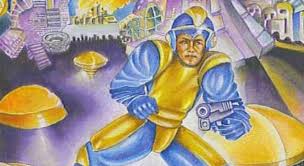 As for Monster Hunter, Capcom was confirming what we already know. News of that movie already leaked months ago when it was revealed Paul W.S. Anderson would be directing. That’s the man who made a massive amount of paid fanfiction out of another Capcom property, Resident Evil. Naturally, he has once again cast his wife in a starring role (Milla Jovovich), but the flick will also star Ron Perlman (the original Hellboy) and Tony Jaa (Ong-Bak).

“After living and breathing in the universe of Monster Hunter for 14 years we are thrilled with enormous anticipation to see our creations adapted for a theatrical release,” says Ryozo Tsujimoto, producer of the Monster Hunter series. Like Resident Evil, Monster Hunter will be released and distributed through Sony Pictures’ Screen Gems imprint.