For animal lovers, Euthanizer will either be a disturbing dramatization of man’s insensitivity towards all four legged creatures or a vindication of the deep emotional attachment many feel for furry friends. This finely crafted Finnish film from writer/director Teemu Nikki features a gun-toting, leather clad vigilante fighting on behalf of the animals and out to teach the human race a lesson that audiences won’t soon forget. Find out what you’re in for with this Euthanizer Movie Review!

OK, so the description above may be overselling the action packed adventure element of Euthanizer. Our main character, Veijo, is out to avenge pets done wrong (or is he?), but without taking it quite as far as Keanu Reeves in John Wick (Note: don’t mess with people’s dogs). Fewer fists fly, but the body count does rise by the film’s end.

I have to admit that my first assumptions about Euthanizer had me thinking Dr. Jack Kevorkian on a rampage, but despite the poster art, Nikki’s intentions seem far from such schlock. Then again, it could just be the extra weight given to foreign films by an American critic who doesn’t often indulge in subtitled cinema. So if it’s not exactly the The Punisher for Pugs, what is Euthanizer all about? Let’s get into the plot.

Veijo runs a black-market operation euthanizing people’s ailing pets to make extra money. It is clear he has dark secrets, but only after meeting a young nurse and a seedy mechanic (who’s mixed up with a vicious gang of neo-Nazis) that Veijo’s carefully balanced, albeit deranged, life begins to show cracks. Things turn to the extreme when Veijo does not finish a job he was paid to and his client finds out…in this grungy exploitation throwback.

Yeah, there’s a lot going on in this deliberately paced story presented by Nikki. The muted color palette painted over the beautiful landscape of Finland creates an introspective atmosphere which causes the viewer to squirm while scenes of makeshift animal euthanasia are carried out by our stoic protagonist, who seems to have a deeper connection than most to the animal kingdom.

Veijo as played by Matti Onnismaa is stone-faced loner who puts animals out of their misery when he’s not fixing motorcycles in his garage. The twist is that he’ll only take the job after determining that the animal is truly in pain, which he usually determines is caused by the owner’s negligence or disregard for their pet’s true feelings. Often turning the tables on potential clients to give them a glimpse of the animal’s suffering so that they won’t do it again. 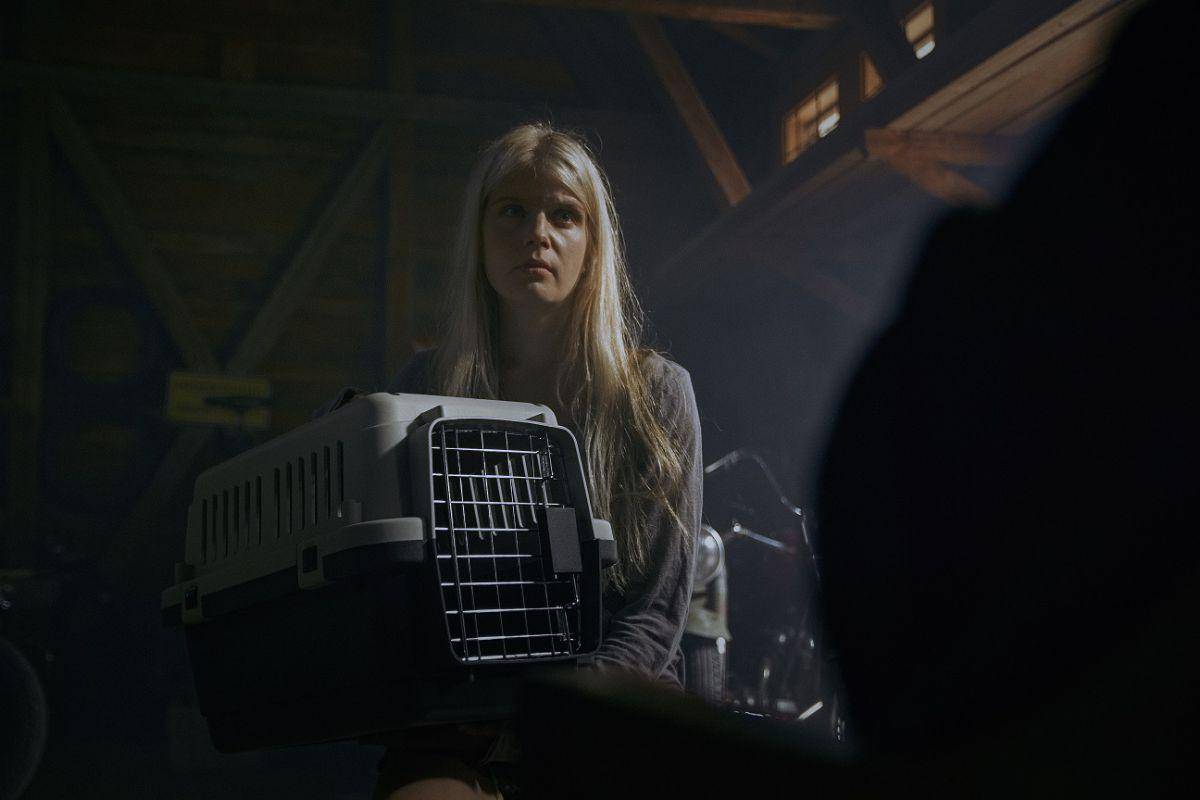 If our protagonist’s line of work sounds sinister, that’s actually not the vibe we’re presented with initially. As played by Onnismaa, Veijo is clearly a man with a moral code that is focused on preventing future animal cruelty by bluntly addressing the behavior. The fact that he is trying to reason on some level with these perpetrators, along with his empathy for the plight of dogs, cats, fish and even guinea pigs invokes a certain kind of respect for his self-appointed mission. 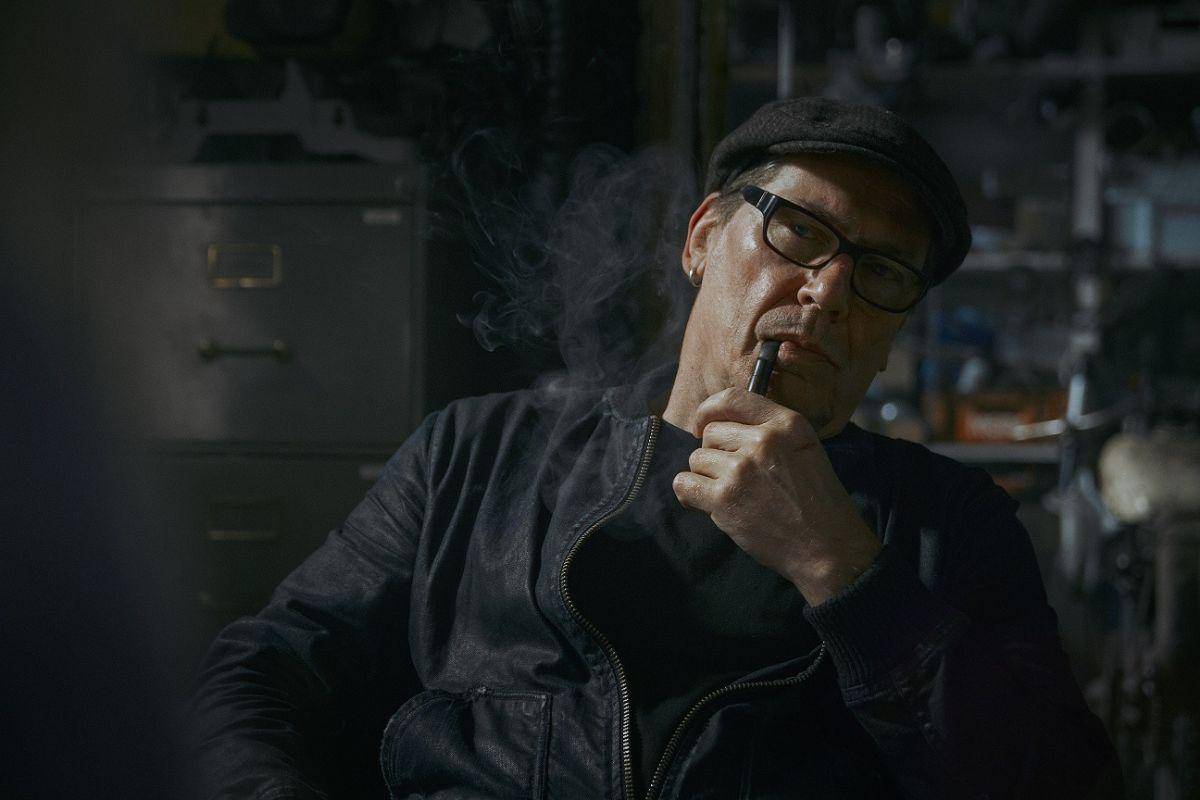 Nikki’s work with dialogue is sparse, but effective. Never giving in to an expositional impulse, the characters tells us all we need to know in their reactions to the world around them without having to explain what they are feeling. In particular, Veijo’s manner of twisting the words of the selfish pet owners back on them is very entertaining, while revealing his outlook on the relationship between all living creatures.

It should be mentioned that this film is not for the faint of heart when it comes to the final fate of animals. Though there is no explicit gore or grotesque fascination with animal cruelty present, many animals are put to death as dictated by the plot, including one particularly heartbreaking implied end to a canine character that American audiences will likely not be prepared for. So a certain level of caution should be exercised for those with an acute sensitivity to such things.

An interesting juxtaposition exists to Veijo’s line of work that comes in the form of his terminally ill father, being kept alive and on morphine in a care facility. Seemingly playing the good son, Veijo makes visits and there meets up with Nurse Lotta played by the demure Hannamaija Nikander. Struck by his tender side the two strike up a relationship that’s gets all kinds of freaky. 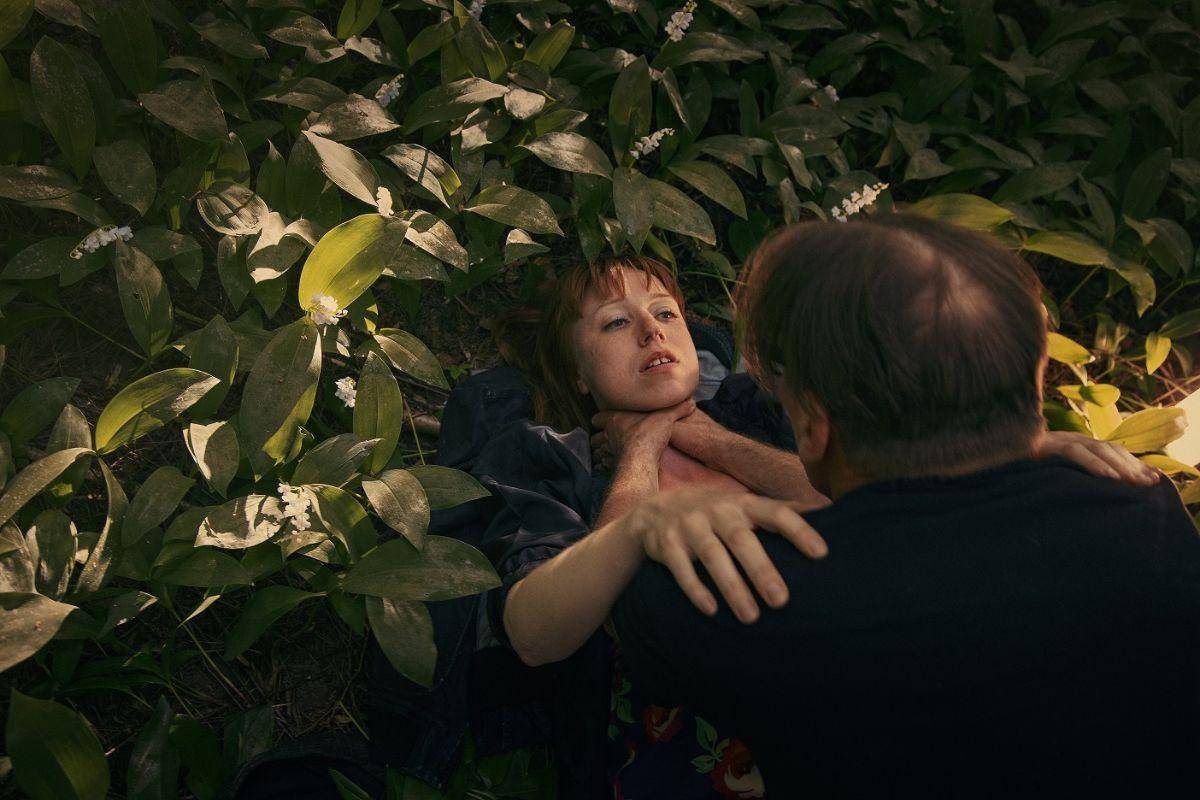 There is a sex scene in this film that starts off like a romantically impulsive roll in the hay, but ends with a dangerously kinky twist you won’t see coming. More than titillation, this scene actually serves to connect the two characters on a deeper level, revealing personal tendencies hiding below the surface of reserved demeanors which are only to be revealed in their most vulnerable moments.

Also in the mix is Petri (Jari Virman), a diminutive mechanic at a tire shop who is trying to get in good with a gang of Neo-Nazi frat boys by stealing inventory from his employer. Given to impotent rage outs, he’s like a barking Chihuahua who would just as soon pee on the rug at the first sign of trouble, but tries to talk a big game. Virman’s performance is perfectly pathetic, whining as his wife makes him transport the kids and family dog around, when he would rather be cavorting with his racist buddies. 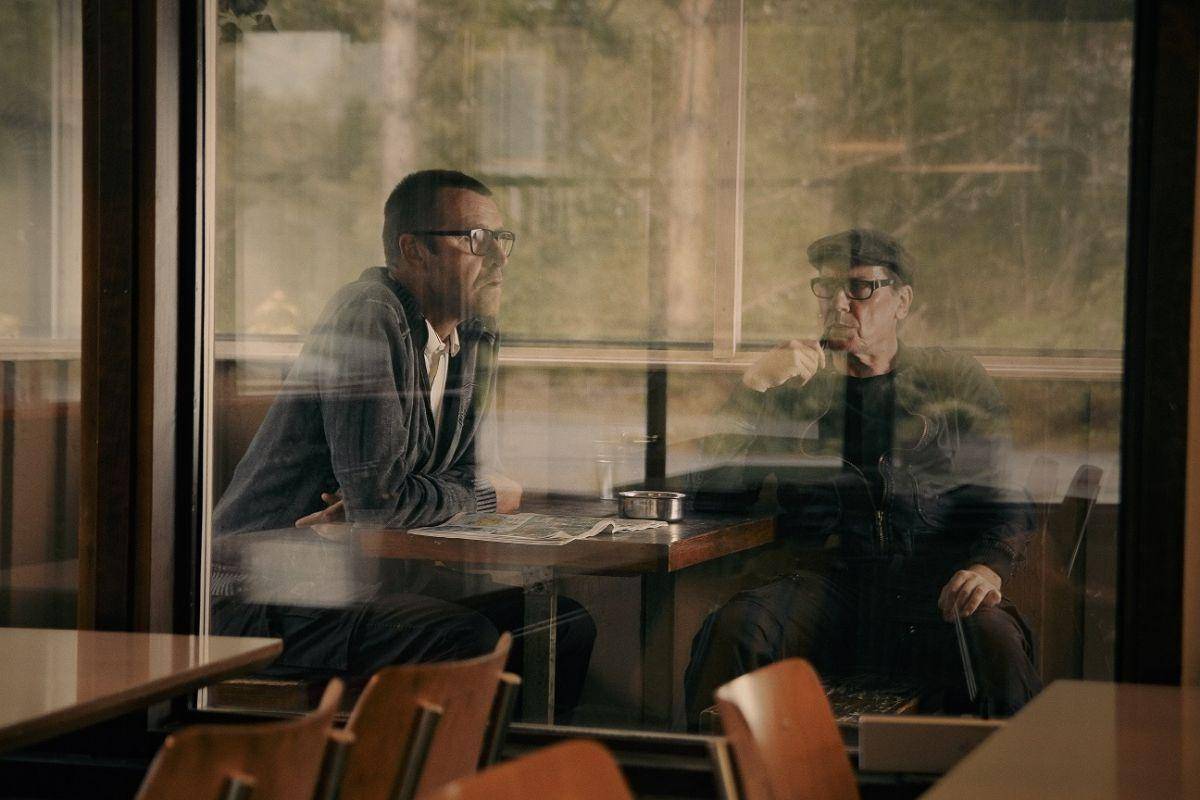 Nikki does a good job setting up the characters in this community, letting each be established on their own terms before the plot lines begin to intertwine. As Veijo, Lotta and Petri cross paths it becomes clear that these are individuals on the edge of unraveling and had they just chosen not to get involved with one another, a whole world of trouble could have been avoided.

Soon Veijo’s seemingly altruistic nature is called into question as a crucial element of his daily routine is removed by Lotta, assuming she was bringing an end to a source of pain for her lover. The reveal of the psychological construct that motivates Veijo’s work as the euthanizer is a frightening turn, which sets a series of events in motion which will shock the viewer.

Themes of helplessness, fear and brutality run throughout Euthanizer in such a way that even though the actions of many characters are horrendous, the audience somehow understands these behaviors as symptoms of the human condition, albeit taken to an extreme. Though touted as a throwback to exploitation cinema, the film never crosses the line into camp or sleeze, remaining artful until its final moments. 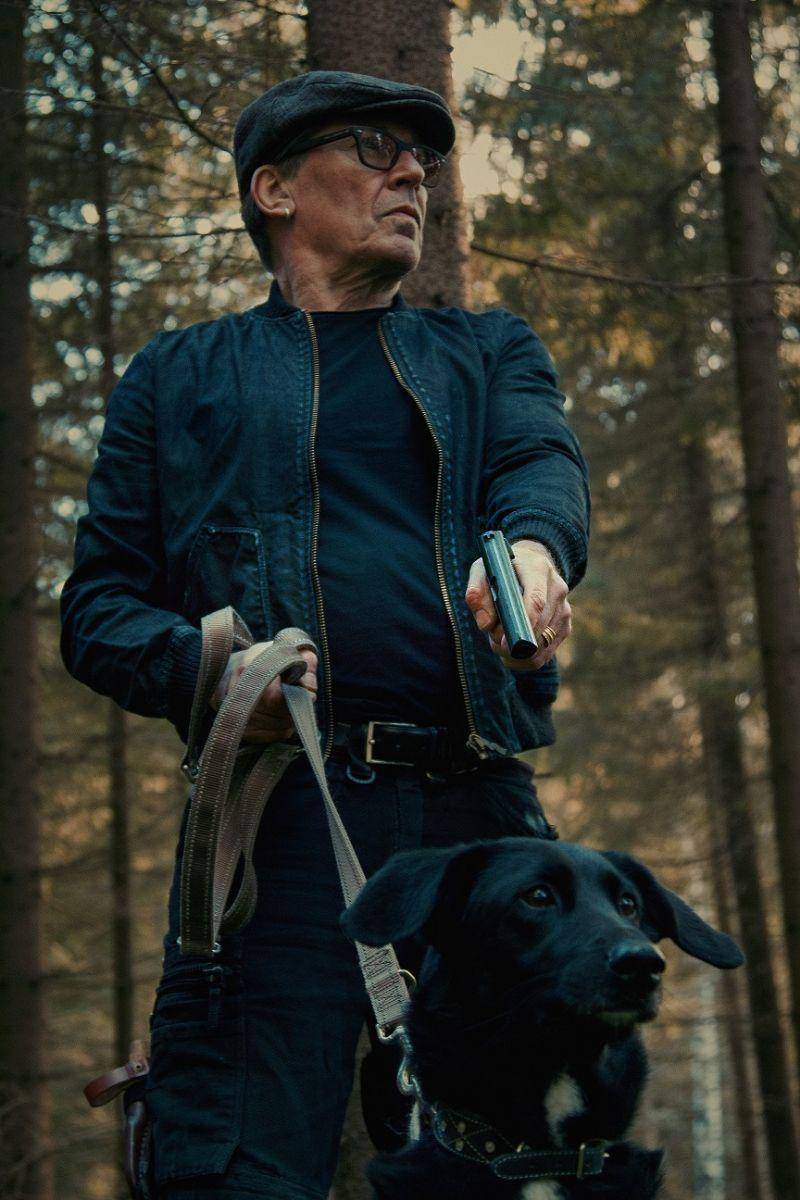 Though technically a foreign film to American audiences, the universal nature of the story is anything but. Euthanizer could just as easily have been set in West Virginia as rural Finland and provided the same impact. In fact I could easily seeing this film get an American remake along the lines of Girl With The Dragon Tattoo or Let The Right One In that could lead to a major cultural discussion come awards season.

Euthanizer took me on an emotional journey from my initial expectations of a trashy flick filled with people being put to death using various gasses or injections to the delivery of a poignant and unsettling tale of humanity. I highly recommend you seek this out for a film experience that will cleanse your palate of the this summer’s slate of high impact, often empty movie mediocrity.

Euthanizer is beginning it’s run in Los Angeles theaters starting 7/20 and will be available on VOD from Uncork’d Entertainment starting August 7.

Movie distributor Devilworks has their hands on another interesting foreign film: Trolls

Saving Leningrad Coming To The US This December

We have our big bloated military epics, the Russians have theirs. You’ll

The Bastards’ Fig Tree Coming This May