Who Won This Weekend’s GWENT Open?

The Gwent Open officially kicked off this weekend. The competition concerned eight professional eSports members from all over the world, competing for a slice of the $25,000 prize pool, plus Crown Points — the ranking points of the Witcher Card Game’s official esports series.

The competition whittled down to Ilias Karamanis from Germany, AKA “AretuzaAndyWand,” vs. Damian Kaźmierczak, AKA “Tailbot,” in the final tournament. Karamanis emerged triumphant and took the biggest slice of the pie — $9800. Kaźmierczak received the second-largest check for second place: $5050.

If you missed the GWENT Open and would like to watch, all the coverage has been archived on the official CD Projekt Red Twitch channel. The GWENT Open will return this July. 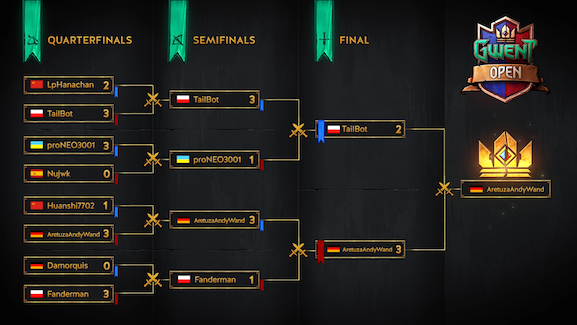 About GWENT: The Witcher Card Game
In GWENT: The Witcher Card Game, gamers clash with their friends in fast-paced duels that combine bluffing, on-the-fly decision making and careful deck construction. The game is played over a best-of-three series of rounds, as players unleash their hand by slinging spells and diverse units with special abilities and use clever tricks to deceive their opponents.

About CD PROJEKT RED
CD PROJEKT RED is a game development studio founded in 2002. It develops and publishes video games for personal computers and video game consoles. The studio’s flagship franchise, games from The Witcher series, has sold over 33 million copies worldwide. Its newest release – The Witcher 3: Wild Hunt – debuted in 2015 for the PC, PlayStation 4 and Xbox One, and has since received over 800 awards and accolades, including 250 Game of the Year awards. Together with GOG.COM, a game store offering hand-picked titles for PC and Mac, CD PROJEKT RED is part of the CD PROJEKT Capital Group. CD PROJEKT S.A. is listed on the Warsaw Stock Exchange (ISIN: PLOPTTC00011).

Bill Maher decided to defend Baby Boomers by criticizing Gen Z and Millenials. He bashed them for something they love. He said on his show that people who watch game streamers on Twitch waste their time. This 65-year-old political commentator criticizes something he never understands. I guess it is his

Everyone knows the truth now: the PS4 version of Cyberpunk 2077 is a buggy mess and the XBox One version isn’t running so well either. One month ago folks were begging to play the game for just a minute; now they want refunds. Today Sony took the unprecedented step of

The good news is we got another Cyberpunk 2077 trailer today. The bad news is, it doesn’t market the game quite as well as the last few have. If this was the first look we ever got at Cyberpunk 2077, we would think the game must be some kind of

Microsoft Pulls The Plug On Mixer

Remember Mixer? That game streaming platform Microsoft was aggressively pushing as an alternative to Twitch, that felt more like the next Bing? Our gut feelings were correct…the thing just Binged itself. Mixer had the corporate lifespan of a fly, taking off from out of nowhere in 2016 under the name