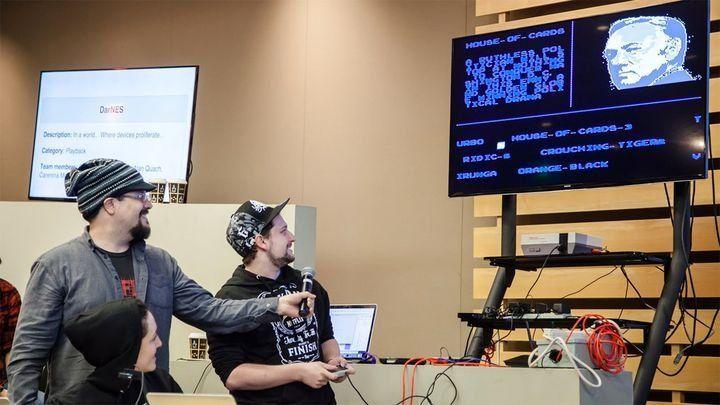 These days, if there’s a display that glows, you can probably get Netflix on it. The PS4, the PS3, the XBox One, the XBox 360, the Wii U, the original Wii, the PS Vita and both versions of the 3DS can stream Netflix, as well as any smartphone and any smart TV, and any TV that can be made smart via a Roku device. Clearly, Netflix will not stop until all electronics that exist in this world can receive it. Case in point: they got Netflix running on an NES.

Well, it depends on your definition of “running.” The company has a special event during the winter called “hack day” where engineers are encouraged to cut loose and create crazy ideas. This year, employees Guy Cirino, Alex Wolfe and Carenina Motion resolved to bring Netflix to the Nintendo Entertainment System. They had mere hours to pull it off, so what they accomplished isn’t much, but it’s closer than most would have figured.

The NES itself was not modified in any way. The Netflix program runs off a cartridge (so, obviously, it can’t actually stream Netflix yet) but they were able to get as close as time and restraints would allow by building a fully functional menu system, as well as managing to upload several seconds of footage from the opening titles to House of Cards. In effect, they managed to get an FMV to play on this system, which would have made the developers of Ninja Gaiden steaming with jealousy 25 years ago.

You can check out the program for yourself below. At the pace they’re advancing, it’s only a matter of time before Virtual Boy Netflix becomes a reality.