Alien invaders have been plaguing mankind on movie screens for decades, so what does Battalion, an Australian import from writer/director Michael Miller bring to the intergalactic battlefield? More than you might think for a low-budget indie that relies on character drama instead of the usual Hollywood special effects blitzkrieg. Let’s look to the skies and meet the Battalion in our Battalion review.

Plot:When alien warships appear unannounced around the world and lay waste to major metropolitan cities, several average citizens rise up to join the fight as soldiers, refusing to give up hope for victory.

It should be mentioned up top that special effects in Battalion feature a computer graphic style on par with most PC games of the 90s or the latest schlock film on the SyFy network.

The brief shots of alien warships and attack drones look like digital storyboards or unfinished CG effects you find in the deleted scenes of the latest Marvel Studios blu-ray. I want to get this out of the way because although the effects are below average, that’s not where the film chooses make it’s stand. This story is all about the characters. So let’s meet ’em.

As the film opens we learn that our main leads come from worlds as different as the alien antagonists they will soon be fighting. Jesse Richardson plays John Blake, a flaky California guy who prefers hanging with his homies for a game of rooftop football as opposed to joining his family for a dinner in honor of John’s veteran brother-in-law, Chris played by Michael Thomson. Though he’s a charmer, John’s family hardly has confidence in the young man.

On the other side of the country we meet Tracey Gleeson, played by Ellen Williams, a college professor who can’t quite get her love life in order. An awkward blind date scene serves as a real character building moment and instantly endears you to this smart, but troubled sister of a fallen soldier. Soon Tracey is impulsively boarding a Marine recruitment bus and forming a bond with Blake that grows as the story moves forward. Well, sort of. 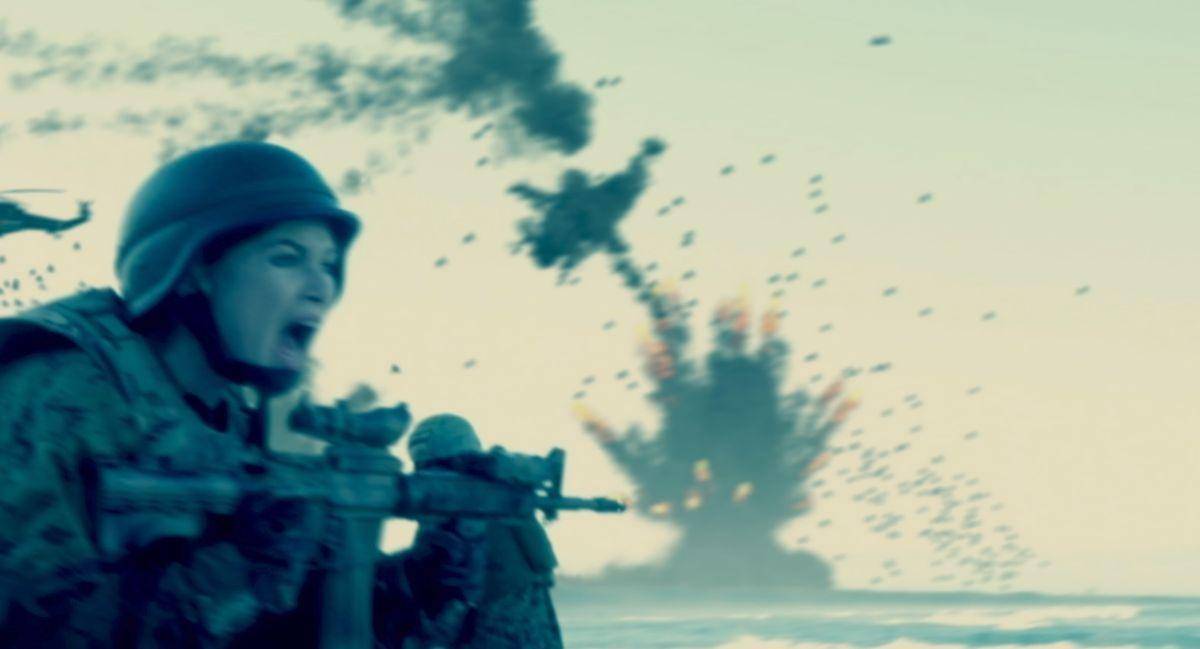 You see, Battalion is a film told out of sequence, similar to last year’s World War 2 epic, Dunkirk. Washed out camera lenses show us the world in flashbacks, while vivid color marks the action that’s moving us forward to the climactic final battle. The audience is lucky to have a duo of lead actors who have a real spark to them and can manage convincing North American drawls in what is not really an action movie, despite the presentation of the poster.

The only issue American viewers may have is the questionable accent work by the rest of the cast. As mentioned, this is an Australian production of a story focused on United States military personnel, therefore all the Aussie actors are doing their best American accent to varying degrees of success.

Some try to cover using a Southern twang, but very few can hit those hard R sounds and the result is incredibly distracting. Let me put it this way, I now have sympathy for my UK based friends who had to sit through Natalie Portman’s English accent in V For Vendetta. Narratively it may have been easier to just explain a wartime alliance between Australian and American forces rather than allowing for such unconvincing vocal performances.

It’s to the film’s benefit that as a writer, Miller has managed to create believable dialogue for characters as they struggle with their decision to fight on against the barely seen alien forces.

The main conflict is between John and his brother-in-law, Chris who are dealing differently with the loss of their mutual family members in the alien attack on Los Angeles. While former slacker John is gaining a sense of purpose as a marine, Chris, the lifelong soldier is slowly losing his connection to humanity. The ultimate fate of the veteran is a little forced, but heartfelt nonetheless. 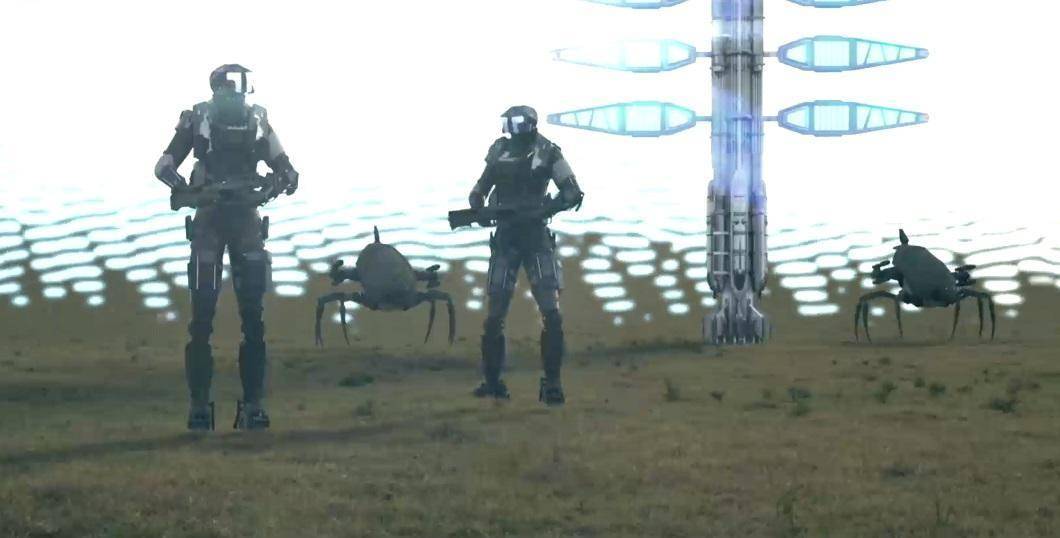 Interspersed between these dueling philosophical discussions, are scenes of jungle fights against the aliens or more specifically their robot warriors. There are bird-like floating drones that can be taken out with one shot in most cases, as well as stiffly animated storm troopers that seem to be sentient suits of armor pulled from the Halo franchise. 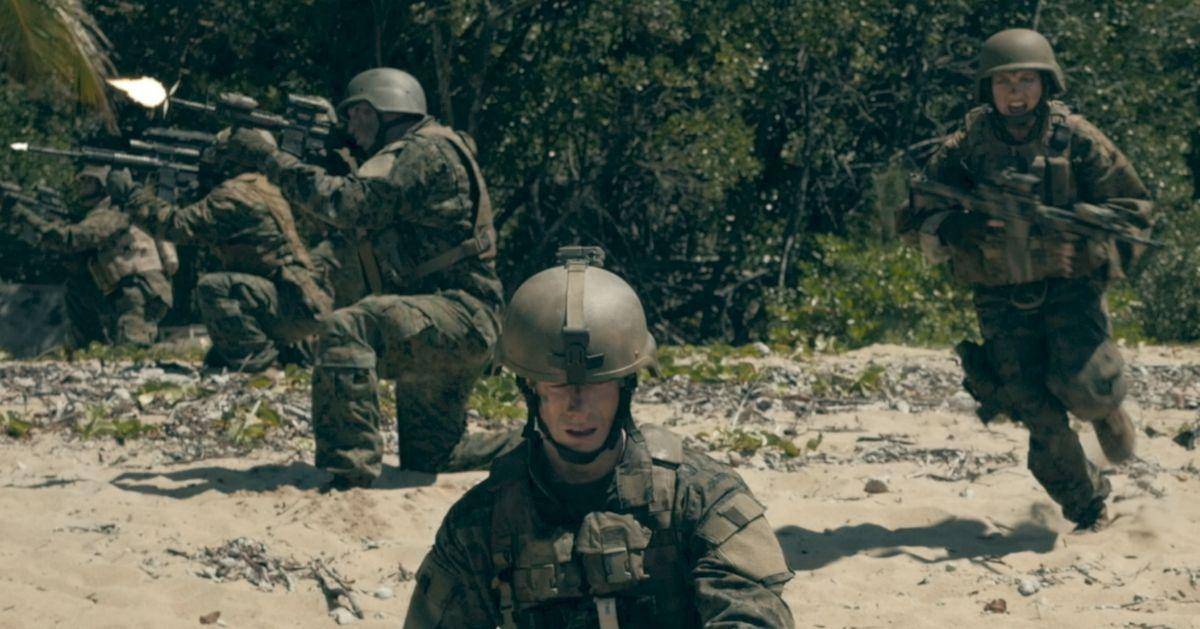 These action scenes are capably filmed, but nothing to get excited about. Again, at this point the director is more concerned with making us worried about the well being of our heroes and their comrades, than presenting breathtaking explosions. Miller takes advantage of this to up the stakes when Gleeson is injured in battle and pulls herself back in the game to continue the fight.

The playing field is evened by the film’s climax when Blake obtains a laser rifle from a fallen robot allowing he and Gleeson to team-up for a kamikaze mission to blow up the alien base. It’s unclear as to why this installation is so essential to the invasion plot, but for any former or current gamer the logic is almost instinctual. Some may be disappointed that there is no face to face confrontation between the aliens, but again, that’s obviously not the aim of this filmmaker.

It’s nice to see a war film that’s not dripping with Michael Bay levels of testosterone and false bravado. It’s also a relief that Battalion never jumps the shark into horror sci-fi just to get some cool scenes for the trailer. Even with the looming presence of the alien invaders, Battalion never compromises its integrity and as a result, the viewer won’t lose sight of the humanity on display.

Despite the limitations of a few cast members and the budget level CG work, Battalion is a fine film. With endearing leads, a steady pace and plenty of character building moments, the story pulls you into the events of a world at war without becoming to sensational or schmaltzty. Miller delivers a solid movie experience, while Williams and Richardson definitely have some crossover appeal for American audiences.

Battalion is available now on VOD from High Octane pictures. Thanks for reading our Battalion review! What did you think of the film?

The genre of science fiction was built on the anthology format. In the 30’s pulp magazines were dedicated to bringing readers short stories of strange creatures inhabiting far off worlds. In the 60’s TV shows like The Outer Limits expanded our minds with morality tales of bizarre goings on from

Reports of alien visitations have been a source of fascination for believers in extraterrestrial life here on Earth for decades. But what if those fringe people who had dedicated their lives to proving the existence of alien life were right and the rest of us had to deal with the

Genre distributor Devilworks has obtained the world rights to an Australian noir thriller with a pretty great title: Burning Kiss. The film centers around a detective and his daughter. Many years ago, his wife was killed in an auto “accident” that he was convinced was intentional…but he was never able

Mad Genius is flashy combo of hard sci-fi and social media savvy from writer-director, Royce Gorsuch that will take you on a reality bending journey that pushes the limits of the human mind. It’s a film that asks you to consider what would you change about humanity if you could