The VelociPastor is a film that’s cinematic DNA seems to have been excavated from an archaeological triple feature of Steven Spielberg’s Jurassic Park, William Friedkin’s The Exorcist and Bruce Lee’s Enter The Dragon. Actually, scrap that. More likely it was films like Roger Corman’s Carnosaur, Leslie Nielsen’s Repossessed and the A Fistful of Yen sequence from Kentucky Fried Movie that inspired this film’s zaniness. The VelociPastor is the hardest I’ve laughed at a film in the last year, proving that you don’t need a Hollywood budget or marquee names to bring the funny.

At first glance, the poster art for The VelociPastor presents the film as a cheesy horror flick and though there are shades of The Wolfman in our hero’s story, what filmmaker Brendan Steere has created with The VelociPastor is a loving tribute to grindhouse cinema. The VelociPastor is to B-movies of the 70’s, what Kung Fury is to 80’s action flicks. 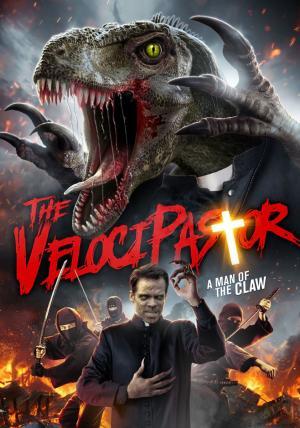 Plot: After losing his parents, a priest travels to China, where he inherits a mysterious ability that allows him to turn into a dinosaur. At first horrified by this new power, a hooker convinces him to use it to fight crime. And ninjas.

From the story as outlined above, it’s hard to imagine the concept for The VelociPastor came from anywhere other than the doodles in the margins of a 7th grade Catholic schoolboy’s loose leaf notebook. Let’s be honest, how much more fun can you have when you’ve got a tale of killer dinosaurs, hookers with a heart of gold, plus the mass appeal of Chinese Ninjas? OK, so it’s martial arts origins are not culturally accurate, but clearly that’s exactly on point for what the director had in mind.

What makes The VelociPastor such a fun ride is the earnestness of the universe. As viewers we are presented with a world where each character accepts the events placed before them without a hint of irony, no matter how ridiculous. Imagine if the creators of the 1966 Batman TV series had fallen on hard times and tried to translate the style of that show to low-budget drive-in features and you have The VelociPastor in a nutshell.

Everyone in the cast is on the same page as to the tone and nature of the humor that informs their performances in a wonderful way. Our leads especially play the melodrama up to the point of camp, careful not to cross the line into pure cheese, though it is clear that everyone, including the audience is meant to be in on the joke.

For example, after our holy man turned “Dragon Warrior” Doug played Gregory James Cohan is convinced by his street walker friend, Carol played by Alyssa Kempinski to become a holy dino-vigilante she utters the line, “I don’t know much about God”, to which he sincerely replies, “ I don’t know much about dinosaurs”. Steere is not afraid to let awkward pauses linger, only to be capped off by a perfectly timed bit of silliness like an overly enthusiastic high five that leads into a musical montage.

Speaking of which, music is worked perfectly into the film with plenty of punk and indie rock tracks making up a soundtrack that adds to the low budget, high energy atmosphere that makes The VelociPastor a ride into ridiculously violent fun.

A special bit of praise has to be given to the broadest performance in the film, as Fernando Pacheco De Castro brings the loudmouth pimp, Frankie Mermaid to life with gusto. The boisterous bravado of Pacheco’s performance makes him both villain and a source of some of the biggest laughs. Despite his giddily vile nature, it makes one sad to see him meet his ultimate fate at the hands of our hero.

Mention should also be made of Doug’s bespectacled mentor, Father Stewart played by Daniel Steere, who is called upon to play the “tough dad” as well as authority figure and is a quirky figure throughout. Father Stewart even gets his own flashback sequence that is comically shoehorned into the film, bringing the main story to a halt. The brief and tragic tale of his time as a soldier in Viet Nam has a laugh out loud ending that makes the audience forgive the narrative intrusion.

If you’re worried at this point that the film is all gags and no gore, let me put your mind at ease. There is plenty of blood spilled in the course of the story. Mouths full of dagger like teeth rip limbs from bodies, razor sharp talons slash jugular veins with Jurassic ferocity and all with sprays of crimson blood to delight those seeking violent thrills. The catch? Everything in the film looks to have been purchased from a Spirit Halloween superstore, but that doesn’t mean it won’t get a reaction out of you.

The mastermind of the evil plot to get American citizens hooked on a super addictive strain of cocaine so that they have to join church led substance abuse programs that will be used as brainwashing centers to guide them into a martial arts cult is Wei Chan, played with amazing comedic restraint by Jiechang Yang. Purposely portrayed as an Asian stereotype as found in countless Kung-Fu films of the 70’s, the villain gets his comeuppance in a hilariously blood-soaked climax that finds Doug and Carol conveniently calling upon previously unrevealed martial arts prowess to emerge victorious.

I simply cannot recommend The VelociPastor enough. It’s the perfect balance of farce and fun, that never finds itself acting more clever than it is. It’s the perfect flick for a Friday night that will kick off your weekend with unstoppable laughter.

The VelociPastor is available now to stream on iTunes, Amazon, Vudu, Fandango, Comcast and Sling with the Blu-Ray release coming on September 17th.