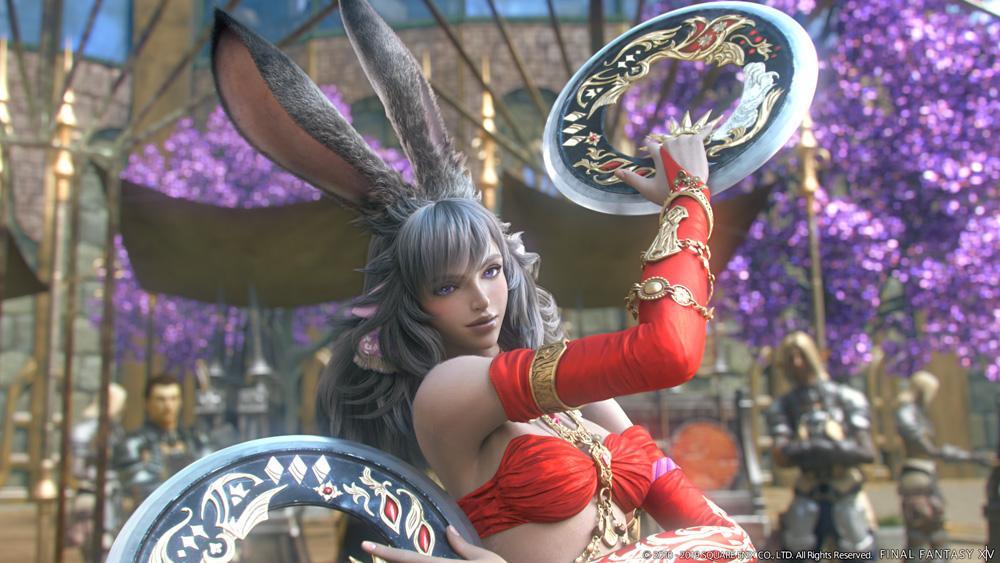 This weekend at the Final Fantasy XIV Fan Festival in Japan, producer and director Naoki Yoshida dropped a boatload of new information regarding Shadowbringers, the third expansion on the way to the game this summer.

Are you human, or are you Dancer? You’ll be able to decide soon when this new Job is added to the game. Dancer is a ranged DPS that uses throwing weapons.

A different new race, the bunny-eared Viera, were revealed at a previous Fan Festival in Paris, but the trailer showed only girls….turns out there’s a reason for that; Viera have appeared in past FF titles and according to those, male Viera are supposed to be rare. To make up the difference Square is adding the Hrothgar, who are entirely a male species.

Two new cities are coming: the Crystarium will be the hub for upcoming new content and Eulmore will be like a medieval Midgar: a high-class metropolis that overshadows a lower community of ruins and poverty.

More details can be found in Square’s official overview below. Final Fantasy XIV: Shadowbringers will be live July 2, though preorder holders will get slightly earlier access (June 28).

Los Angeles (March 25, 2019) – At the FINAL FANTASY® XIV Fan Festival in Tokyo, Japan, SQUARE ENIX® revealed to 15,000 attendees that the highly anticipated third expansion, Shadowbringers™ will take players to the First World and the realm of Norvrandt. This marks the first time Warriors of Light will journey across dimensions and into a land similar, yet different. Here they must become Warriors of Darkness to restore night and save the world from the apocalypse the Flood of Light promises.

The reveal of the complete Shadowbringers trailer presents a deeper look at the expansion’s setting. The trailer is available here: https://youtu.be/4tyuIh12_HU.

These features add to the list of exciting previously announced content, including a level cap increase to level 80, the Trust system—which provides a new opportunity for solo play, a new 24-player alliance raid series entitled “YoRHa: Dark Apocalypse”, New Game+, and end-game content for crafters and gatherers which sees the Restoration of the Holy See of Ishgard. More information is available here: https://na.finalfantasyxiv.com/shadowbringers/

The FINAL FANTASY XV collaboration scheduled for release on April 16 will feature hero Noctis Lucis Caelum visiting the realm of Eorzea for his latest journey. FINAL FANTASY XIV Online players who complete the collaboration content will obtain a number of FINAL FANTASY XV-themed rewards, including Noctis’s hairstyle and outfit, as well as a chance to receive the first-ever four-person mount: the Regalia.

More information is available at: https://na.finalfantasyxiv.com/lodestone/special/ffxv/.

Zenos yae Galvus of FINAL FANTASY XIV: Stormblood™ will be joining the roster of DISSIDIA® FINAL FANTASY NT. The reveal trailer is available at: https://sqex.link/ZenDNT

More information on the title is available at: https://dissidiafinalfantasynt.square-enix-games.com/.

FINAL FANTASY XIV: Dad of Light will return as a full-length feature set to arrive in theaters in Japan. The Japanese trailer can be seen here: https://sqex.link/D0Lmo