Is it serious or just another goofball Pokemon wannabe?

What a weird comparison.
GeGeGe no Kitaro about three decades older than Pokemon.

Kamen Rider IXA said:
What a weird comparison.
GeGeGe no Kitaro about three decades older than Pokemon.
Click to expand...

Well everyone was comparing Youkai Watch to Pokemon. Plus, as I clearly said, I never heard of GeGeGe no Kitaro, so how was I supposed to know it was older?
A

Never saw Yo Kai Watch but started Pokemon (Pocket Monsters ) on DVD. I may need to buy Advance next year.

Dr Kain said:
Well everyone was comparing Youkai Watch to Pokemon. Plus, as I clearly said, I never heard of GeGeGe no Kitaro, so how was I supposed to know it was older?
Click to expand...

...Google.
And yes, GeGeGe no Kitaro is "serious". It doesn't present monsters in a collectible fashion, and it's not used to promote some gimmicky toyline or anything. Outside of a very slight cartoonish depiction, the yokai in that anime typically tent to stay very true to their stories of origin. Any changes to their depiction are usually to make them fit in with a more modern setting, or maybe to provide social commentary on what's going on in Japan right now. In fact, the franchise is considered an all-time classic by Japanese standards; right on up there with Mazinger Z, Space Battleship Yamato, Lupin III, and Doraemon just to name a few.

Google is for when I care enough to research something. 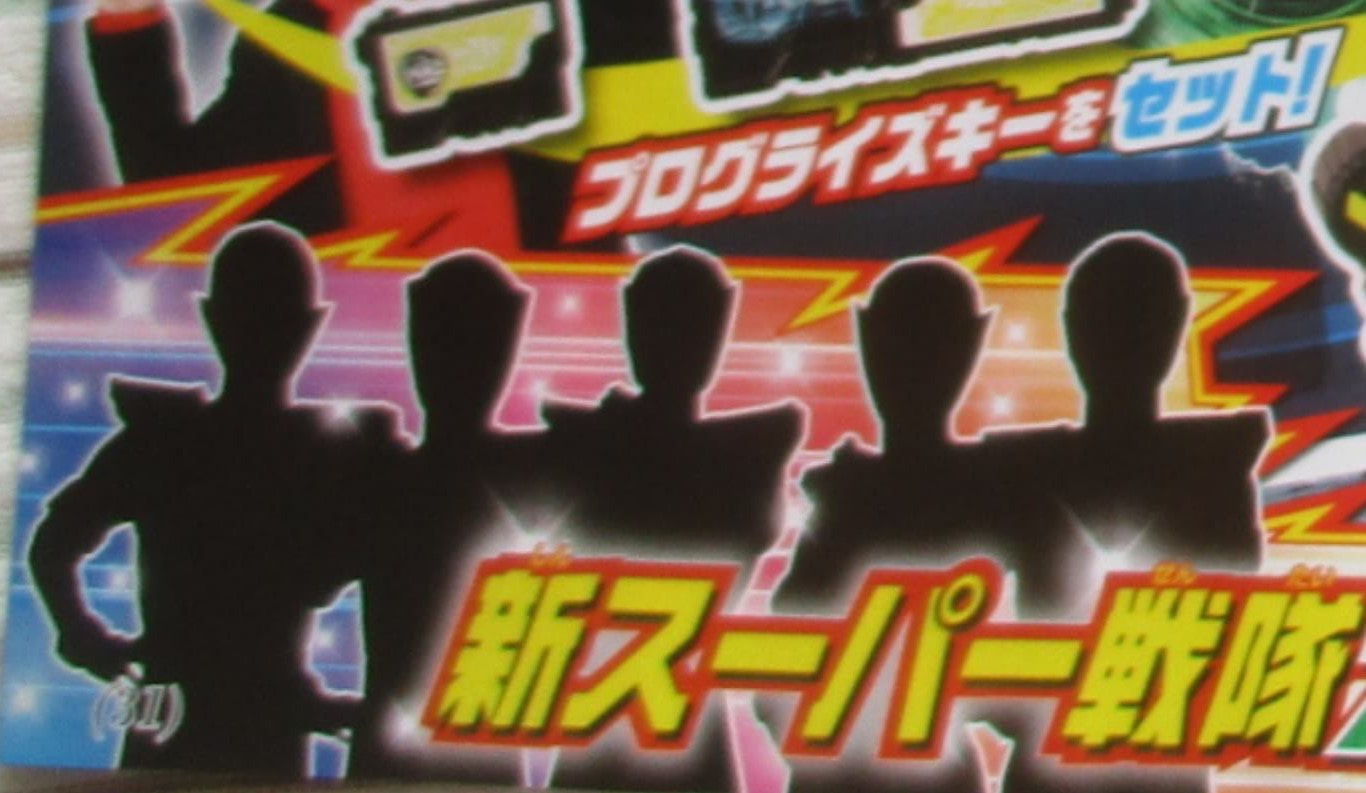 A first silhouette, courtesy of Televi-kun. So, shoulder pads, armlets and bracelets? These mages could be very shiny indeed lol.

The mag teased that they will be unveiled soon. Whether that is in the next issue (out on December 26th) or in early January is not yet known. 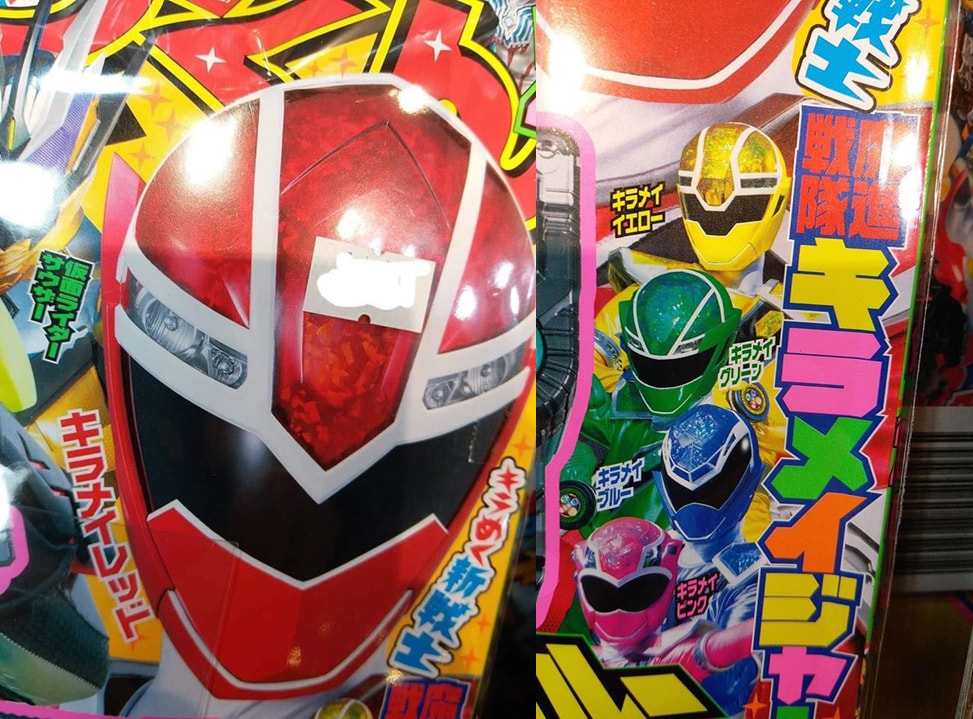 ​
The first magazine scan to feature the Kirameigers helmets has come out. Their foreheads appear to be translucent with glitter inside.

I'm not sure if that rectangle on red's forehead is meant to be censoring something? It kinda looks like there's some sort of design inside the transparent foreheads of the others, but it could equally just be reflections?

Also, the outline of pink's visor is very typical for a bird-themed ranger. So maybe there is still meant to be some animal motive in these designs too?

Edit: Also worth pointing out that you can see some of the other four's shoulder pads and possibly yellow and green showing circular wrist changers?
Last edited: Dec 21, 2019

"KirameiRed, Blue" etc. is not a snappy name, on top of being yet another uninspired "team name-color". Even if they wanted to stick to that, "MashinRed, etc." sounds better.

Strangely, we've heard there would be animal mechas, but the helmets seem to have small headlights above the visors.
C

There's a new Wataru anime coming in spring so they can't really be throwing the term Mashin around without confusion ensuing. Pic related.

Now I know what a few of you might be thinking "Wait, Wataru is getting a new season?" and the answer is YUP!


Kill la Kill had zero chance of saving animation since Trigger overthrew CLAMP for biggest contributor of low quality in the industry, but now anime, especially mecha, needs a savior and who better than the franchise that made isekai popular from the late 80s to mid 90s? I say all this as someone that acknowledges Ryu Knight is the best super deformed mecha. And now we have a Sentai series that coincides with that, also saving toku from- Actually how is Ryusoulger? I haven't seen it.

So confirmation that green is a girl then. I guess the gemstones must also be a thing if they're in the logo as well as on their chest sashes. Also worth noting that Red, Yellow and Green (the traffic light colours) have dashed lines like the center of a road on their black sashes, while Blue and Pink have a solid center white line (runway?) on theirs.

Also, judging by the second picture it looks like our start date is Sunday March 8th 2020. 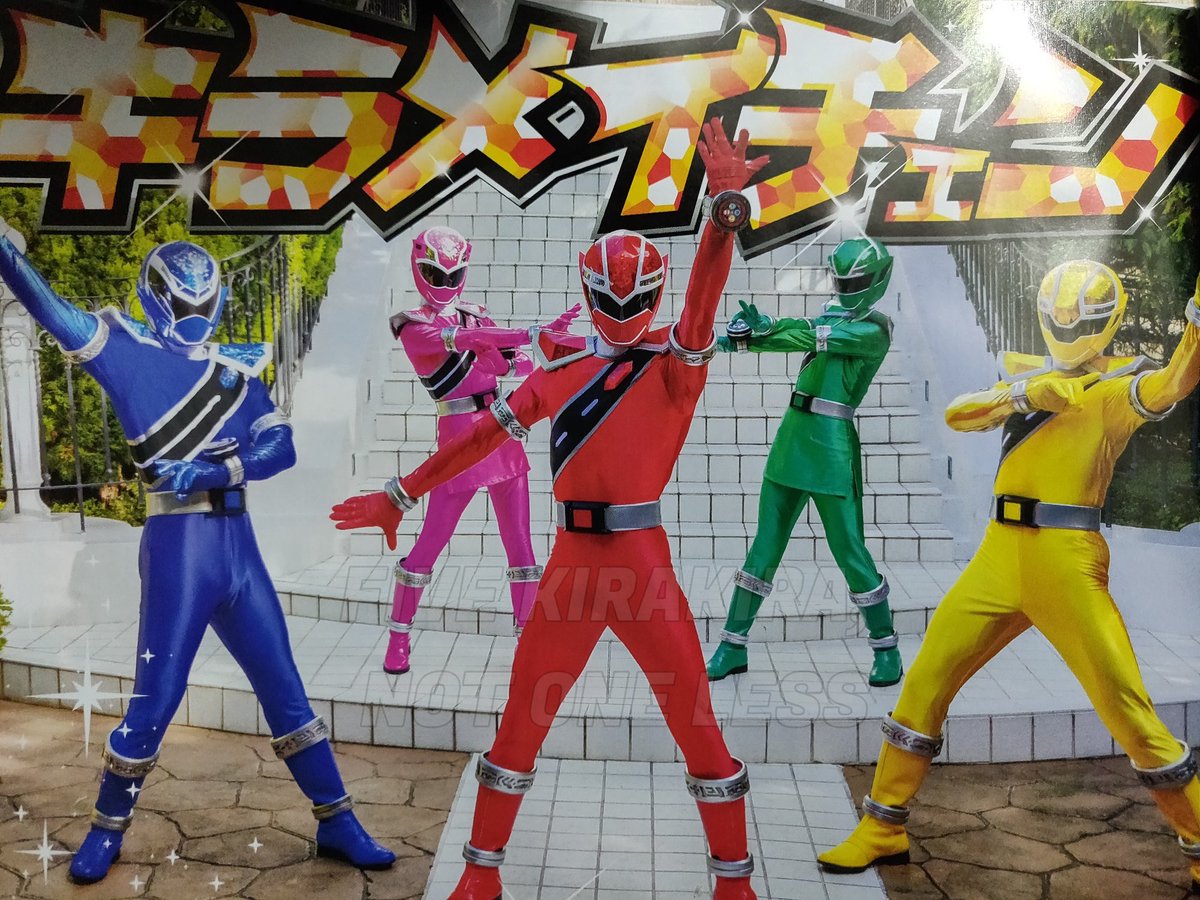 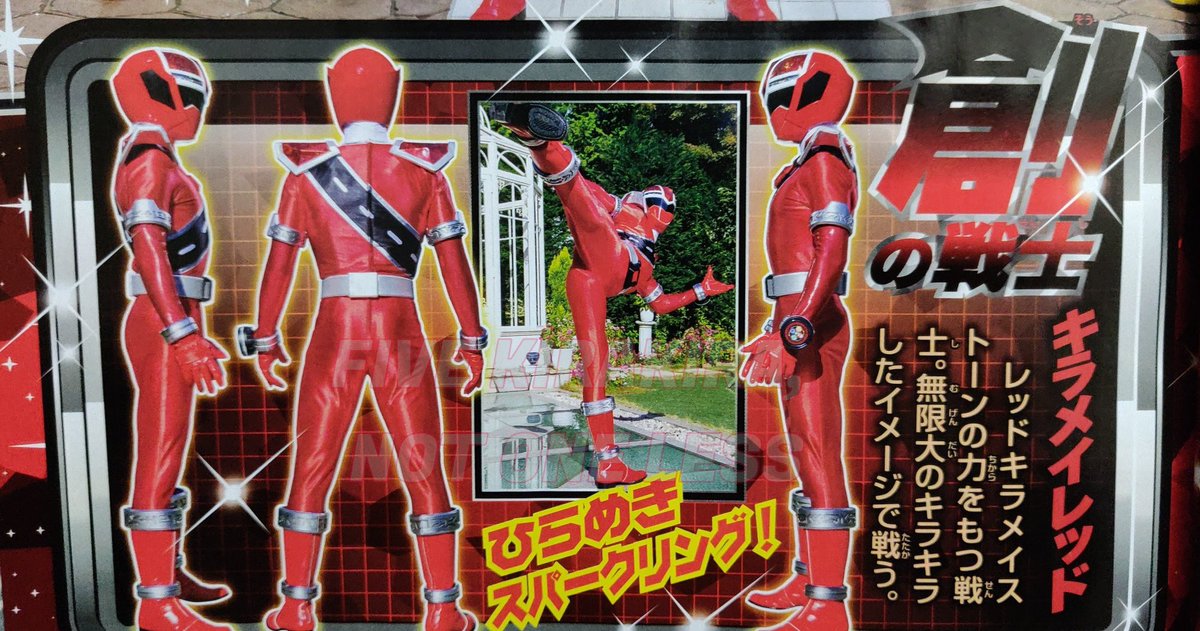 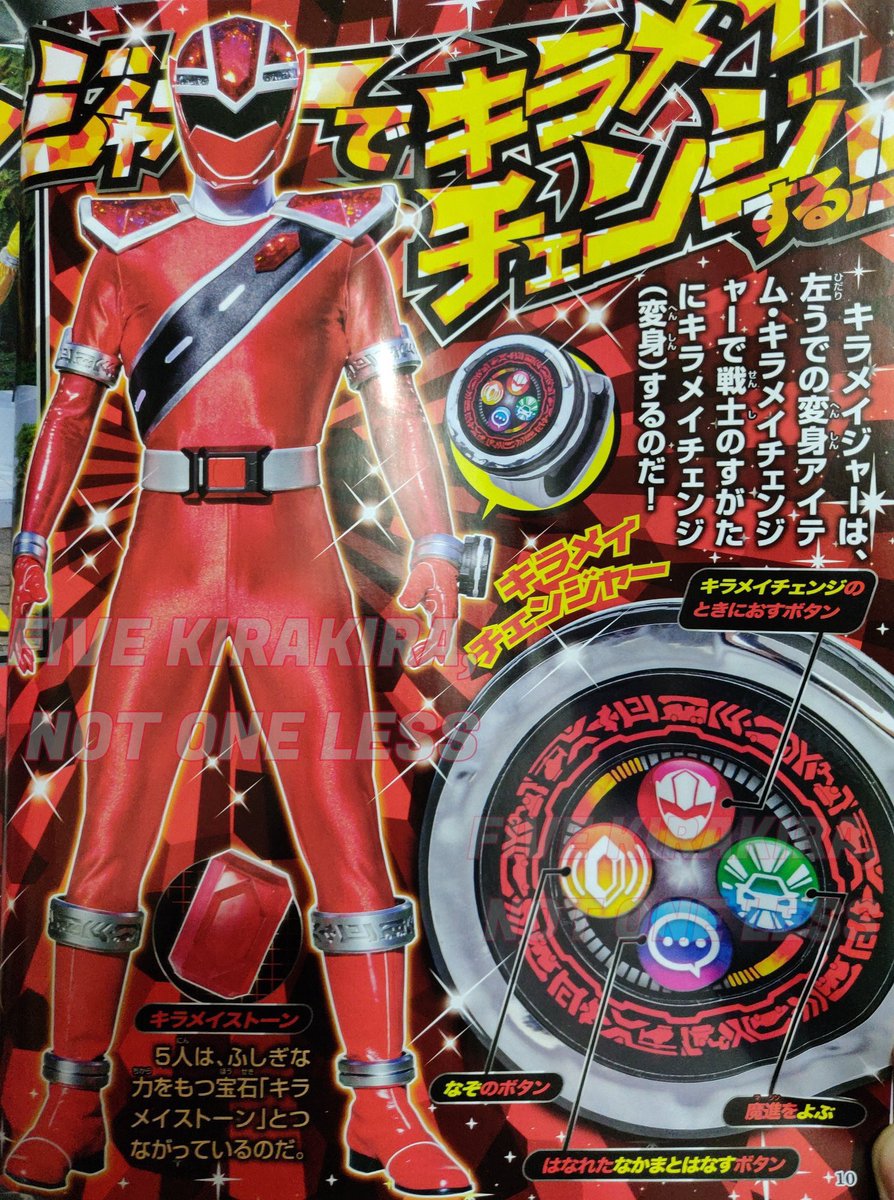 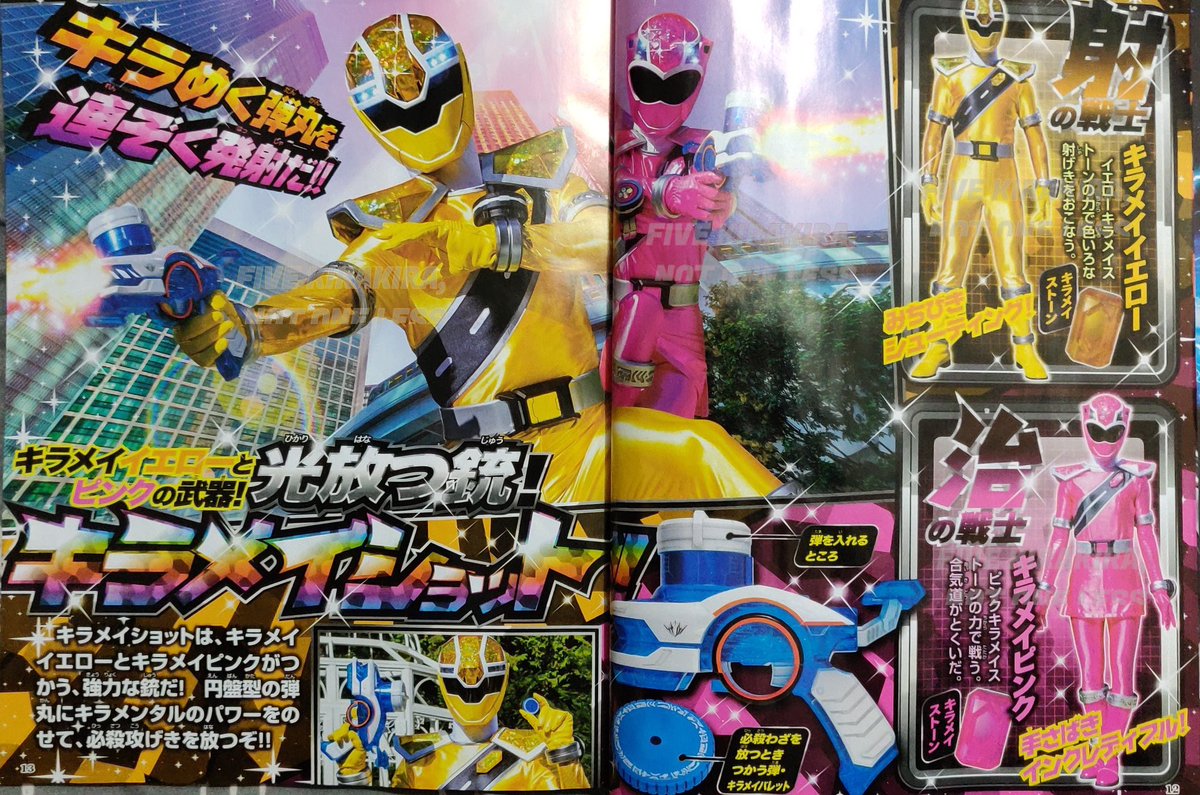 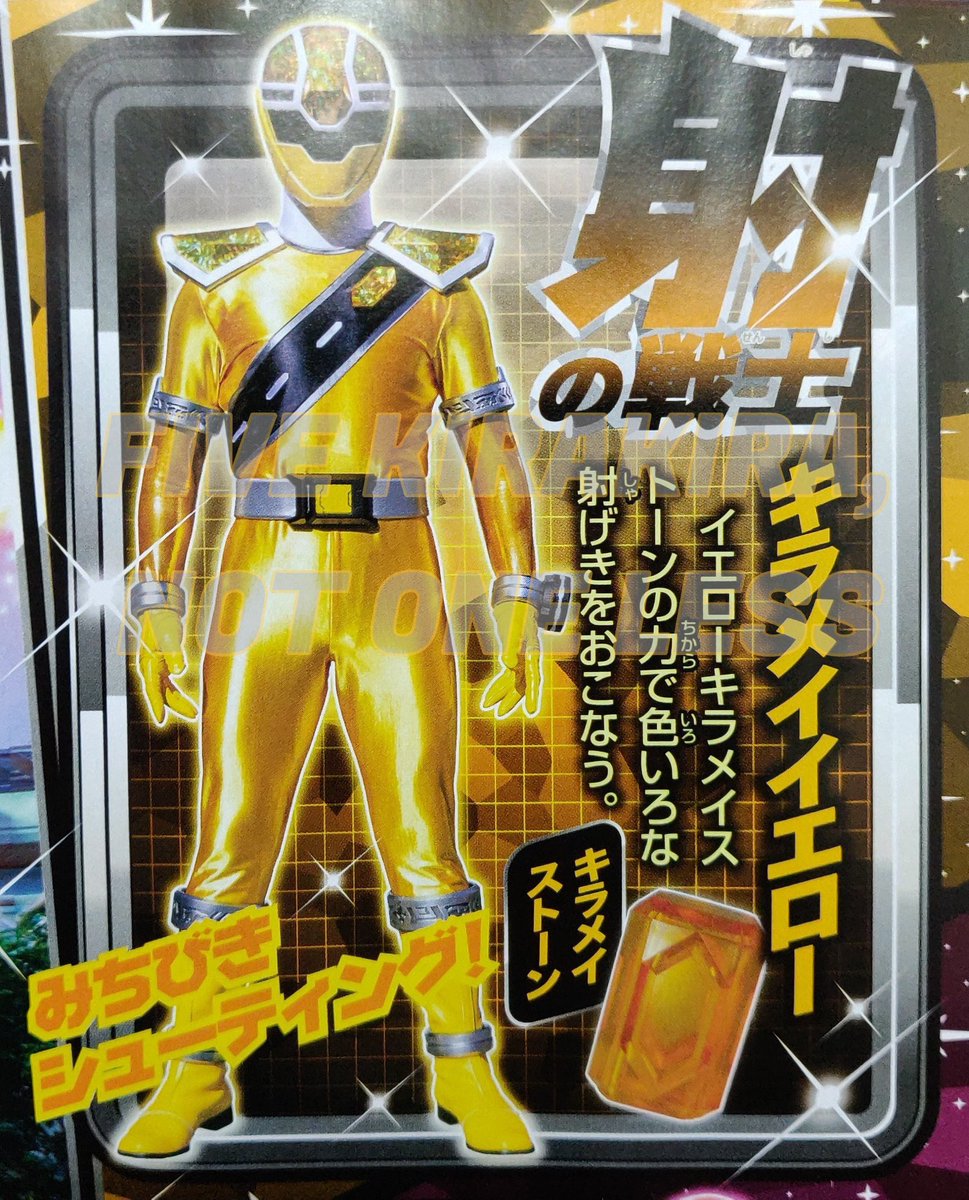 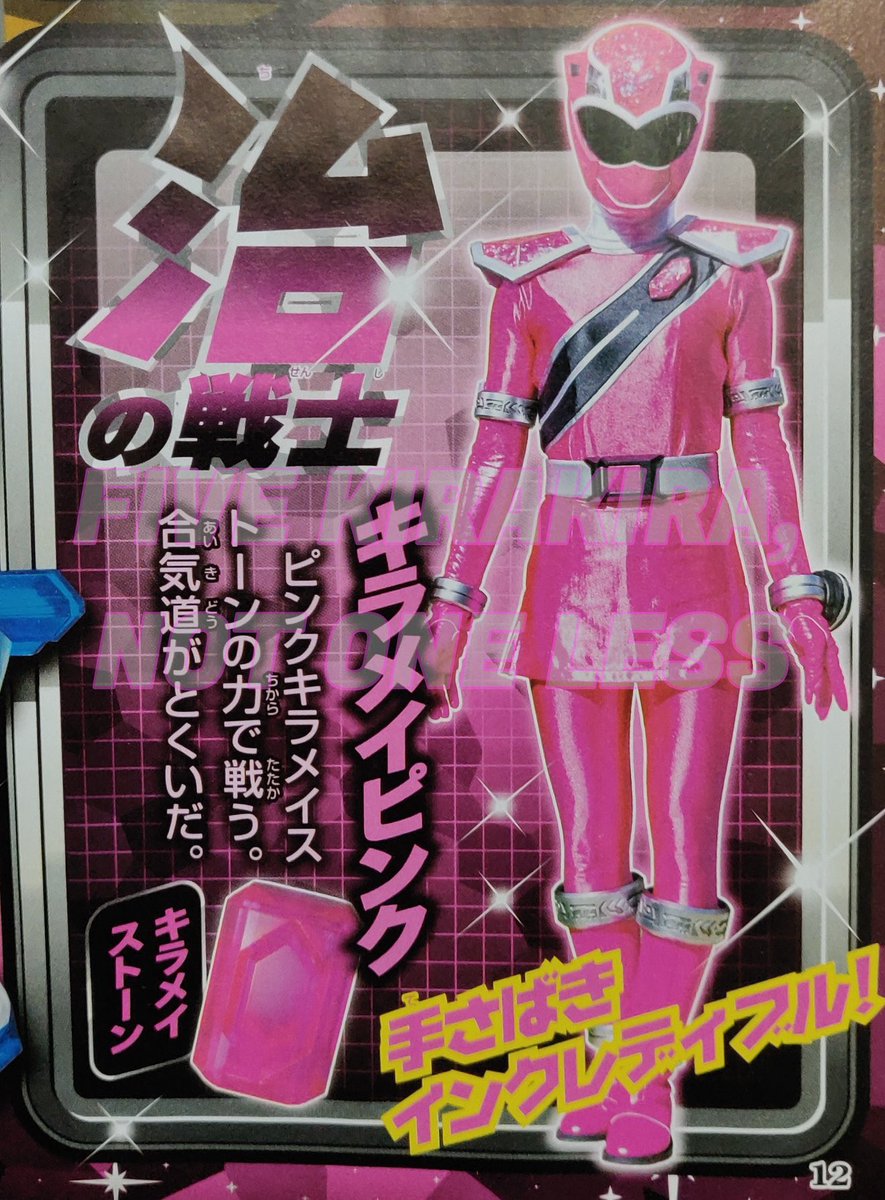 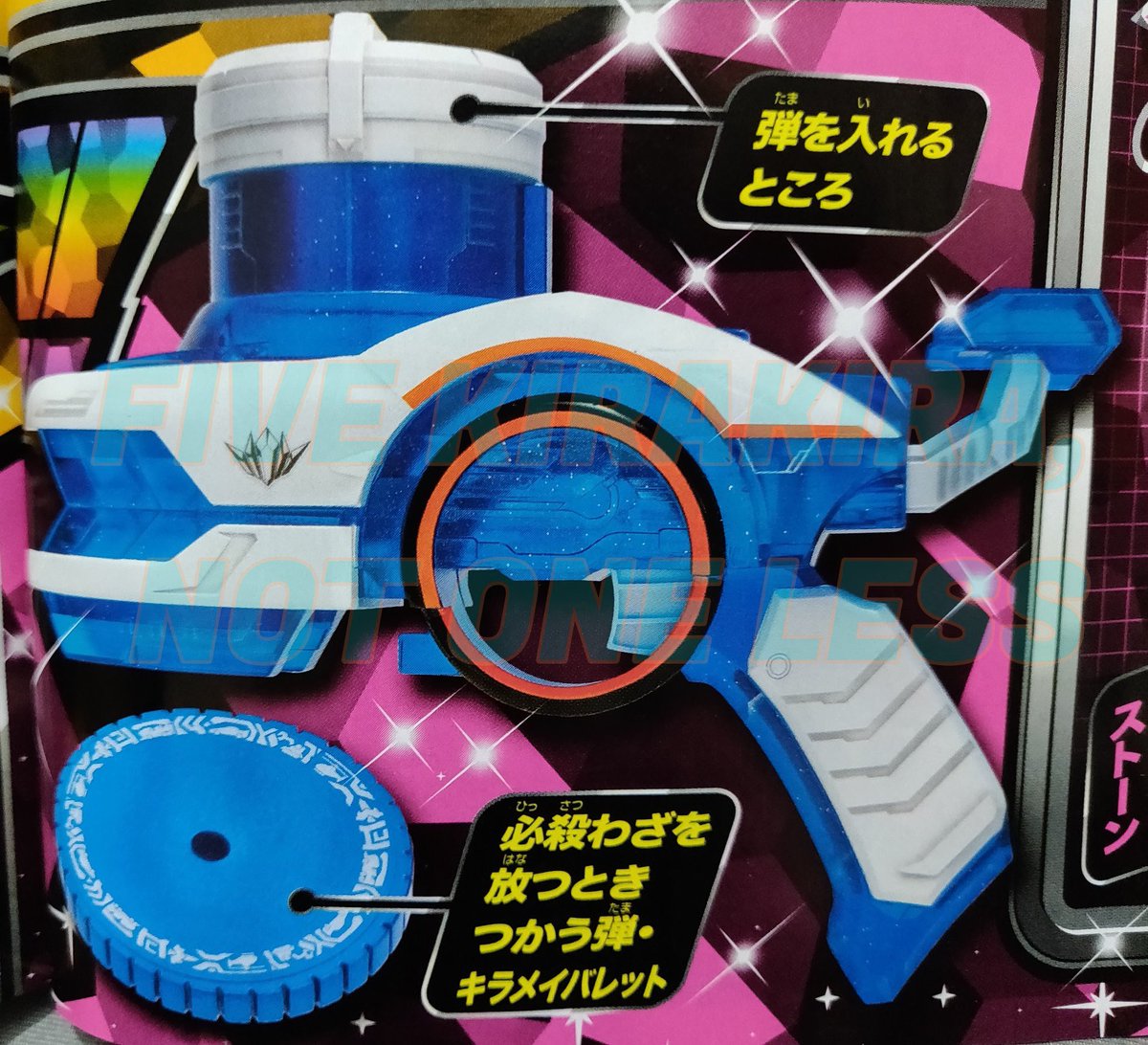 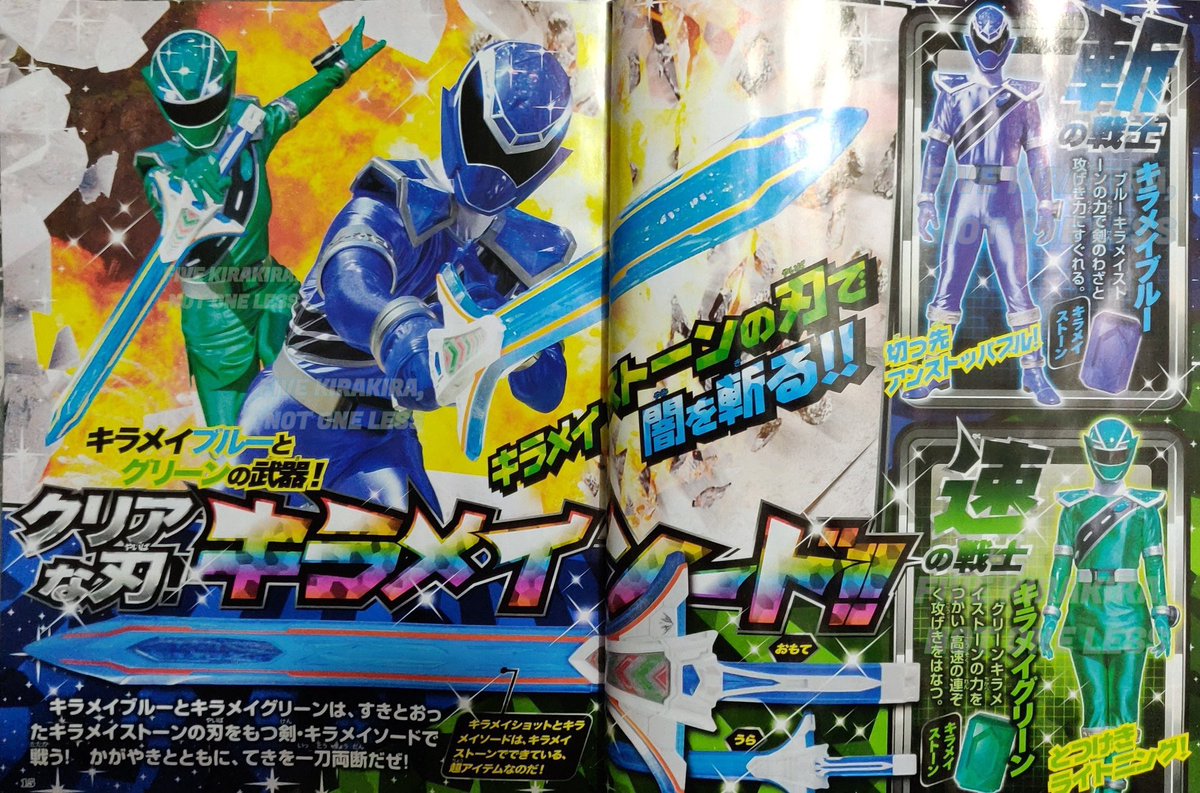 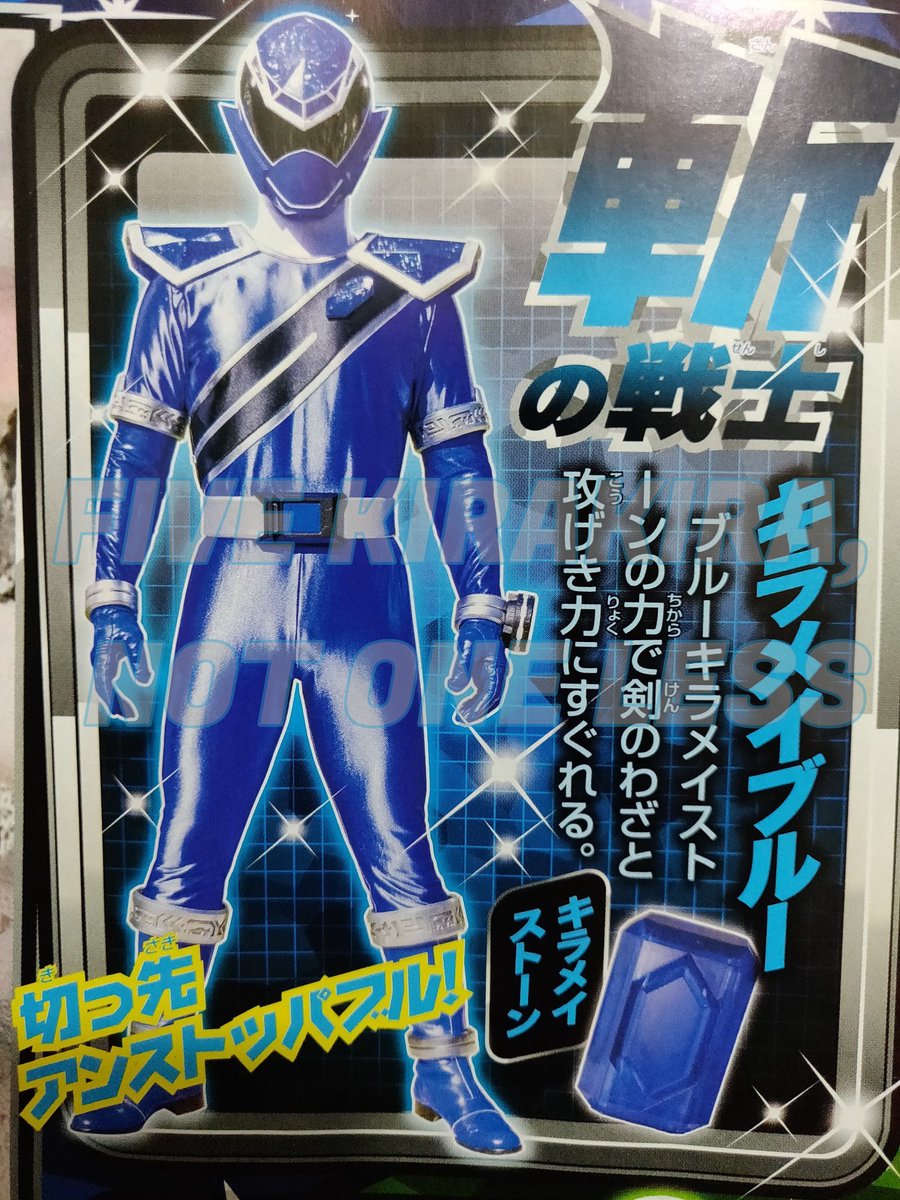 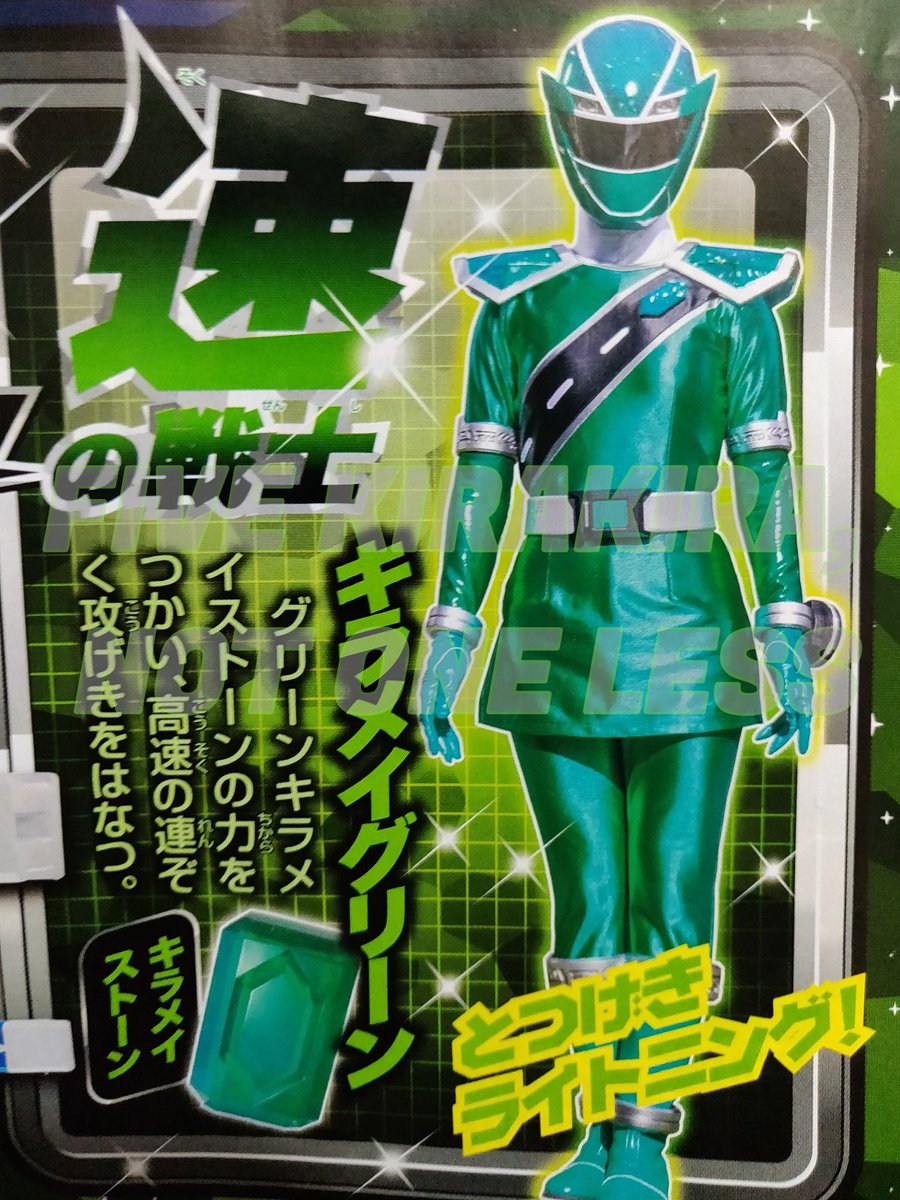 Captain Shark said:
...the franchise that made isekai popular...
Click to expand...

Ah the one word that instantly guarantees I will have no interest at all in a show.

I like the shiny gem stone helmets. The suits remind me of Maskman. We have a brace changer, while bulky and basically looks like a wheel thats spun to activate, I dig the simplicity of the design. The gun looks like a joke and we have yet to see a lot more. The visors seem to imply an animal theme but they also have headlights on them. We could be seeing another year of hybrid animal/vehicle mecha. So far I'm on board with Kirameiger.


I skipped Ryusoulger because I did not find it attractive enough and the fact that Kyoryuger felt likw it was just yesterday for me. I know the demographic for the show would have been fitting for another Dino Sentai (6 year gap) but I didn't care. I have been watching Sentai as they aired new in Japan since Gokaiger - Lupin v Pato and took a break with Ryusoulger. Kirameiger based on what I see so far, deserves a chance from me.

Our first look at a mech. Headlight eyes and grill teeth, so it seems very Go-Onger-ish. 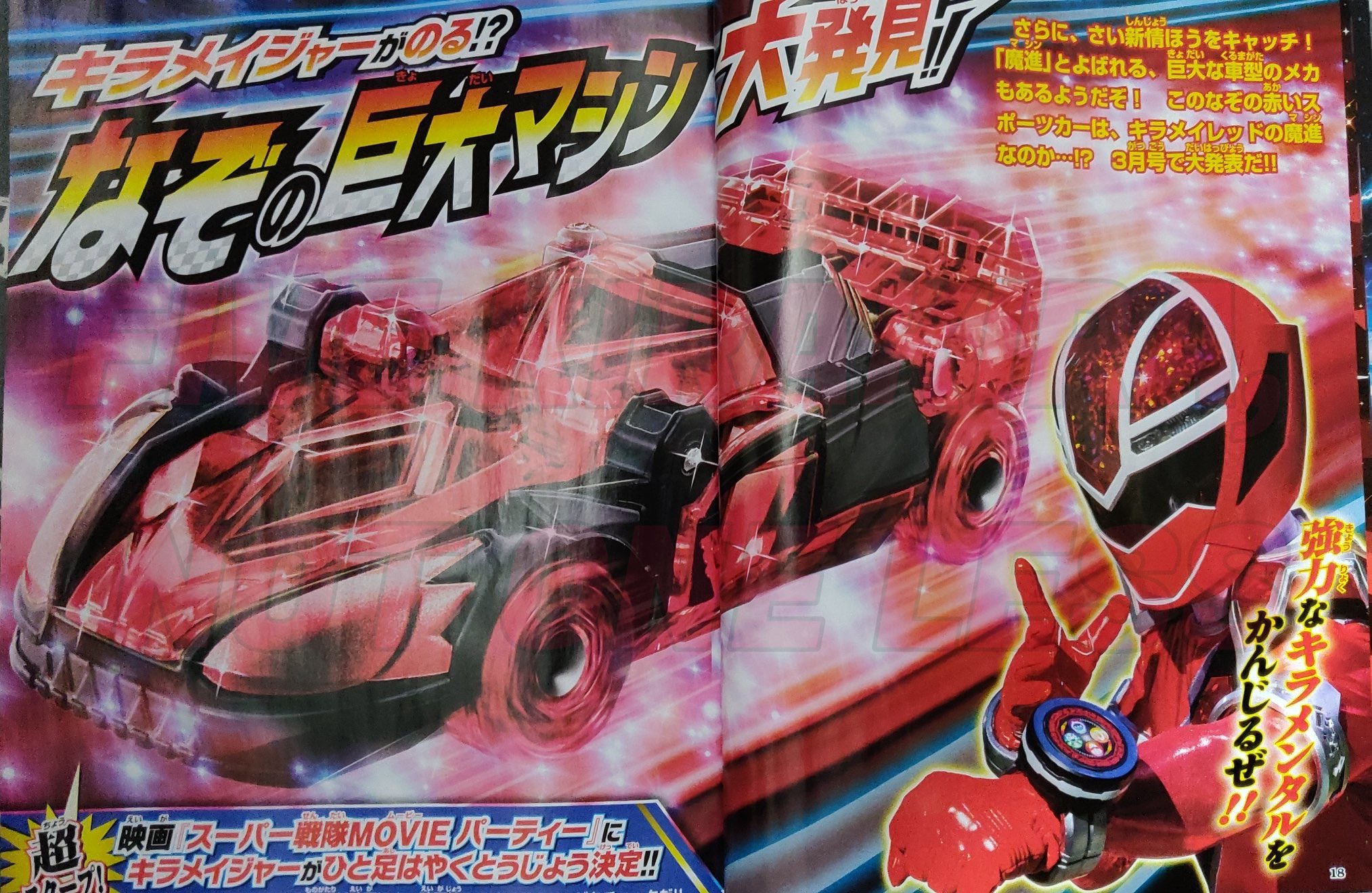 raden238 said:
We have a brace changer, while bulky and basically looks like a wheel thats spun to activate, I dig the simplicity of the design.
Click to expand...

There's doesn't seem to be any sign of collectables though. I'm not sure whether to praise it for not having an intrusive gimmick or merely brace myself for the inevitable "it's not selling as well as last year" news reports.
¯\_(ツ)_/¯

The gun looks like a joke and we have yet to see a lot more.
Click to expand...

There's some images on twitter showing that the gun combines with the sword that Blue and Green are holding in the previous pictures. But yeah, it's obviously a disk launcher toy and doesn't really attempt to hide it. It does seem to have the team's logo printed on the side though.

That car tho.... Is it Speedor's son from another marriage?

March 8th? But that means we have to deal with Ryusoulger for an extra month.

So the previously shown gun is called the Kiramei Shot, and will be the primary weapon for Yellow and Pink. Pictured below is the Kiramei Sword, which will be Blue and Green's primary weapon. They can combine into the Kiramei Buster but apparently only Red is able to charge it up with enough "Kiramental energy" to use it's final attack. 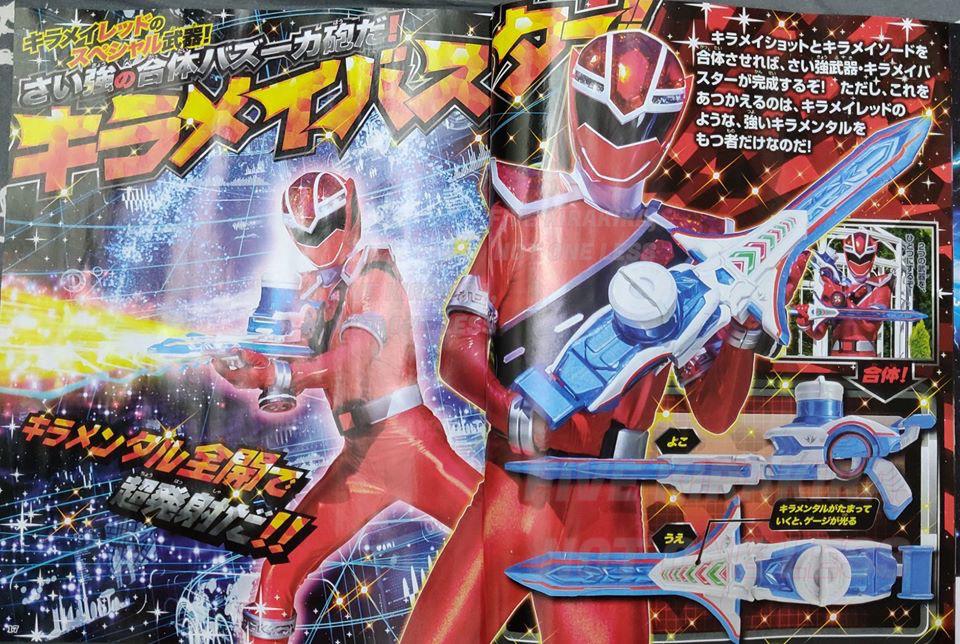 Dr Kain said:
March 8th? But that means we have to deal with Ryusoulger for an extra month.
Click to expand...

Ryusoulger isn't going to be any longer than usual. It started in March due to the Strongest Battle special. They're letting it stay at standard length rather than shortening it to return to February start dates. I think there will be the usual new year break next weekend, and if there aren't any more breaks after that then it should end on it's 48th episode.

I guess this does mean Sentai seasons will begin in March as standard from now on though?

I know it isn't going to be any longer, but I was hoping that the show would end in Feb so they could get back on track. I don't know why the series needs to be 48 episodes considering that even 38 feels like it has gone on too long.

An especially Merry Christmas to Toei, who have trolled us quite magnificently. The previous scans are from Telebi-kun magazine...and they puplished something fake!

Well, kinda. That image of red's car-like mech is a re-colour. That is really green's mech. 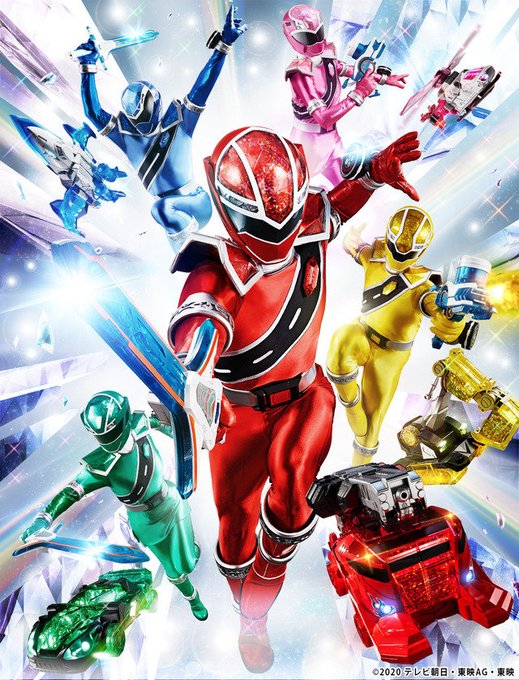 ​
So yes, it seems red has something like a fire engine, green has a race car, yellow has an excavator, blue has a jet, and pink has a helicopter.

The villains will be the Yodon Army, who are trying to steal the “hope and radiance” of people.

It was previously mentioned that the Kirameigers will appear in the 'Ryusoulger VS Lupinranger VS Patranger' movie. It's now been revealed that this will not be the standard single scene cameo but instead they will get a full 'episode zero' that will play along with the movie.

I like the vehicles. We don't see them very often, and yes I know Lupin v Pato just did it 2 years ago but before that it took a long break. I like the shiny crystal stylize look that they all have to go with the theme and once again it seems like the headlights double as eyes again. Is this the first time Toei had marketing this tight before? Normally by this date/year we would have the the full Q1 catalog to enjoy. Now its like they slowly trickle out little by little. Not to mention the troll article with Red's car actually belonging to Green.

Are you sure red doesn't also have a car that looks like green's? It could be a special version. Or it could be that red is going to get to use everyone's abilities and have all of the upgrades again.