raden238 said:
I like the vehicles. We don't see them very often, and yes I know Lupin v Pato just did it 2 years ago but before that it took a long break.
Click to expand...

ToQger was only four years before LuPat. But I suppose that is a long break compared to prior decades where they might have been one or two years between shows with all vehicle mechas.

raden238 said:
Is this the first time Toei had marketing this tight before? Normally by this date/year we would have the the full Q1 catalog to enjoy. Now its like they slowly trickle out little by little. Not to mention the troll article with Red's car actually belonging to Green.
Click to expand...

Yup, they've had a big clamp-down. The toy catalog has already been out, but Bandai didn't put any product pictures in either the Sentai or Rider sections. All the images above are from the latest issue of Telebi-kun magazine, except for the most recent one I posted (with all five mechs) which was from the official series announcement.

The toy catalogs have never been intended for public consumption. We're not supposed to know about the products within them until they get officially announced later. But in the last year or so there's been a couple of incidents where staff working on toku shows have been interacting on twitter, only to get loads of tweets asking them about things that the public shouldn't yet have known existed...and those tweets were almost entirely in English. So it looks like the foreign fandom has forced their hand.

Dr Kain said:
Are you sure red doesn't also have a car that looks like green's?
Click to expand...

Always possible, but apparently the text in the magazine next to the image of the red car said something like "could this be the new Red's mecha?" So it seems like a "we never said that it was his" situation.
Last edited: Dec 28, 2019

What are the monsters of the week, we know about the bad guys but what are the kaijin?

According to Toei the reason Kirameiger combines jewels and vehicles is because boys like vehicles, girls like jewels, so they are combining the two in order to sell Kirameiger towards both camps as it will give the Sentai franchise "a fresh outlook."

And this is why Sentai has been in a slump for the last decade.

Ok, I have a question. What on earth is this thing? 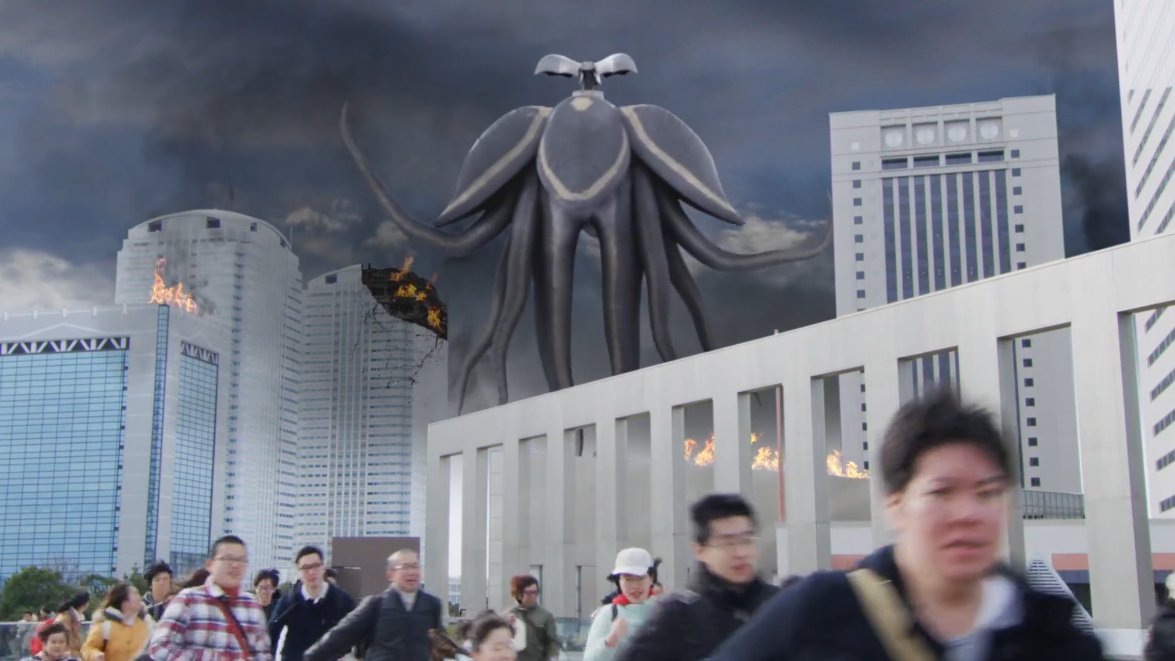 Toei have confirmed that filming on Kiramager has come to a halt after actor Rio Komiya, who plays the red ranger, Juuru Atsuta, has tested positive for COVID-19.

Toei has stated that they have already completed filming on enough episodes to keep the show airing up until mid-May and hope to be able to resume filming before there is any gap in broadcast. But it should be noted that case numbers seem to be rising in Japan at the moment, with speculation that the Prime Minister is preparing to declare a state of emergency in the next few days.

I'm sure we all wish Rio a swift recovery, and for everyone else working on the show to stay safe.

I'm surprised it's taken this long for them to halt production. They should also halt Zero-One.

I haven't really been keeping tabs of the specific situation in Japan, but it sounds like they're one of the countries that's a little behind in terms of getting locked down etc. It feels like it's only a matter of time though.

Toei say that none of the other cast or crew members are reporting symptoms at this time, although they also said that Rio was still filming on-set as recently as Friday. They don't mention whether the rest of the cast and crew are now isolating, but hopefully they are

Toei have, however, confirmed that as of yesterday their studio facilities have been closed and will undergo a complete disinfecting. This means that it's now the decision of health officials as to when it can re-open.

Apparently the studio space was being used by four productions at the time, but only three of them have been named: Kiramager, along with 'Tokuso9' and 'Keishicho Sosaikkacho 2020' (both seem to be police procedurals). It would seem like an obvious guess that Zero-One would be the fourth, which I guess means at the very least they can't use their standing sets (Aruto's office, that room with the fancy 3D printer that makes Progrise keys, etc).

A bit of an update as apparently the first report on this was inaccurate. Toei have released a statement clarifying that they have not shut down their entire studio facility.

They have disinfected every area that Rio Komiya had been into, suspended filming on Kiramager, and sent anyone who had prolonged contact with him home for 14 days "medical observation". They are also now taking people's temperatures as they enter and leave the building, and have closed the canteen area where people would congregate for meals.

Assuming nothing else happens, presumably they could recommence filming after that two week period. That could be a big assumption though, as the Japanese government has said that they predict there will be a spike in cases in the country soon.

Ok, I have a question. What on earth is this thing? 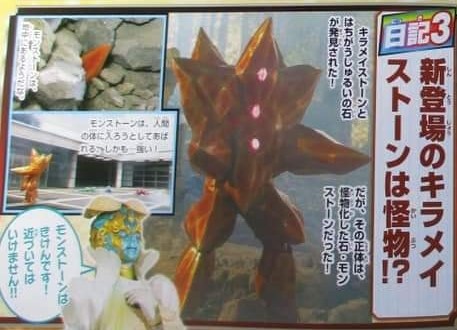 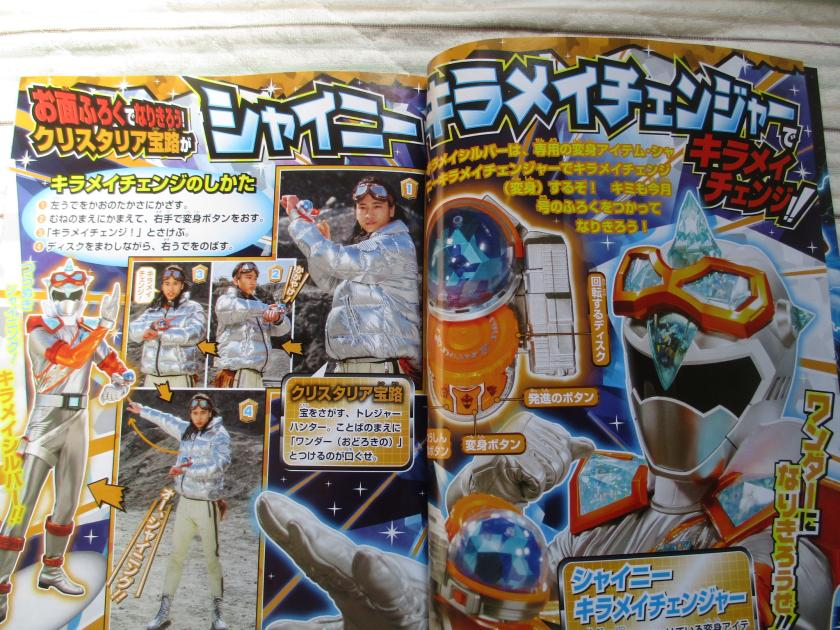 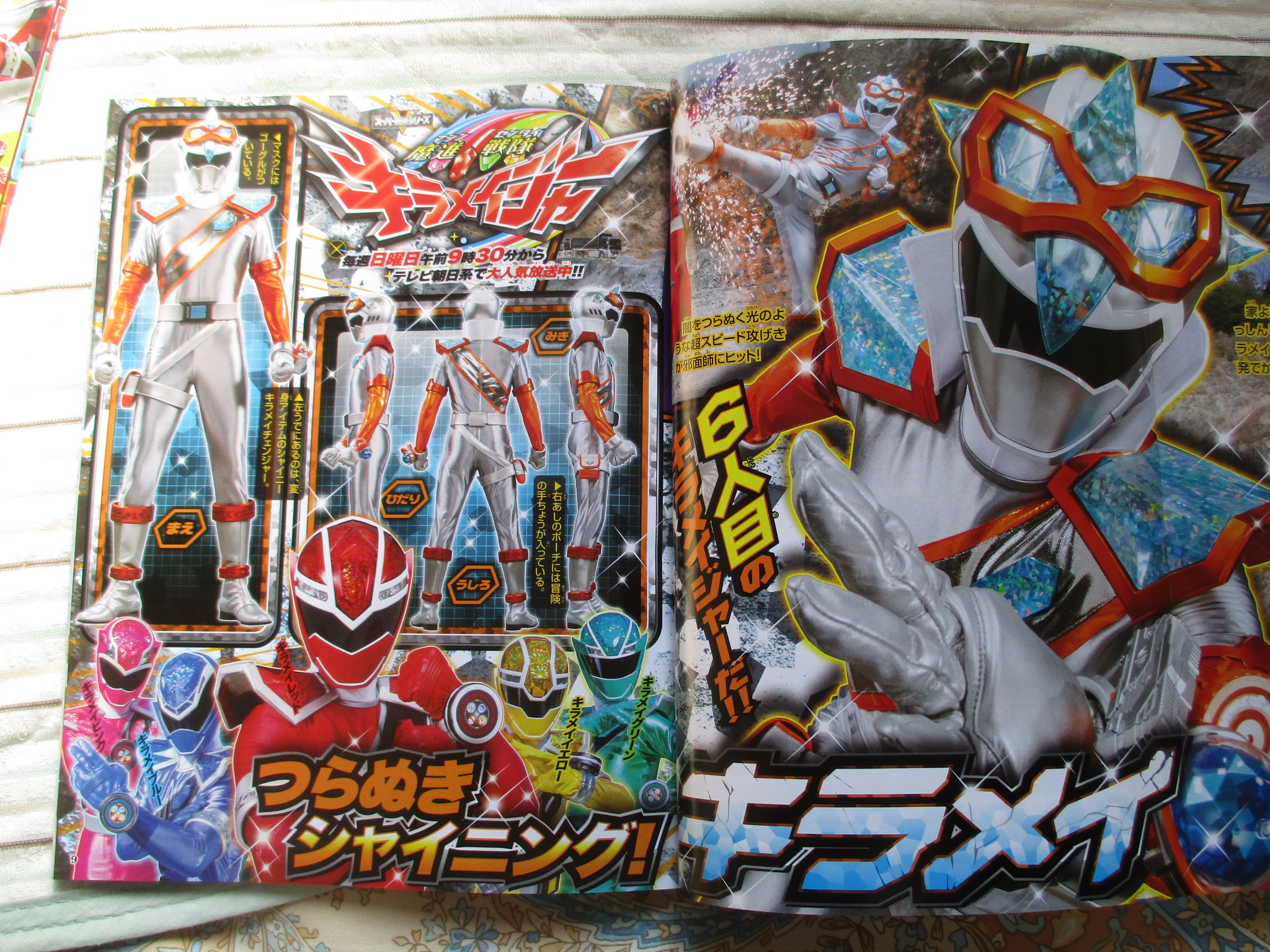 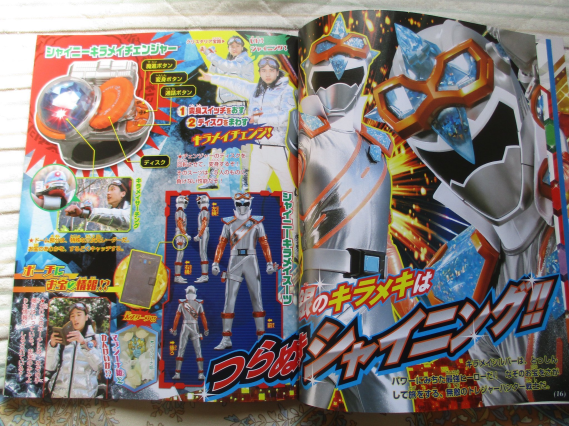 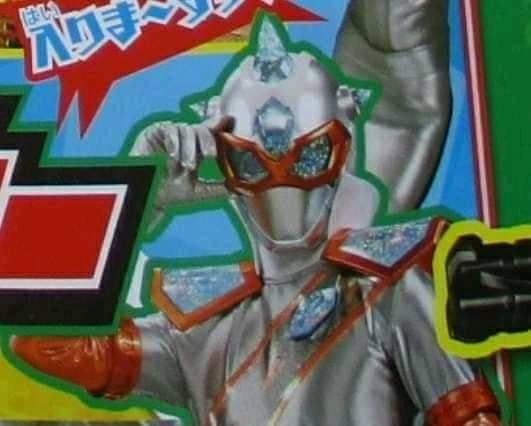 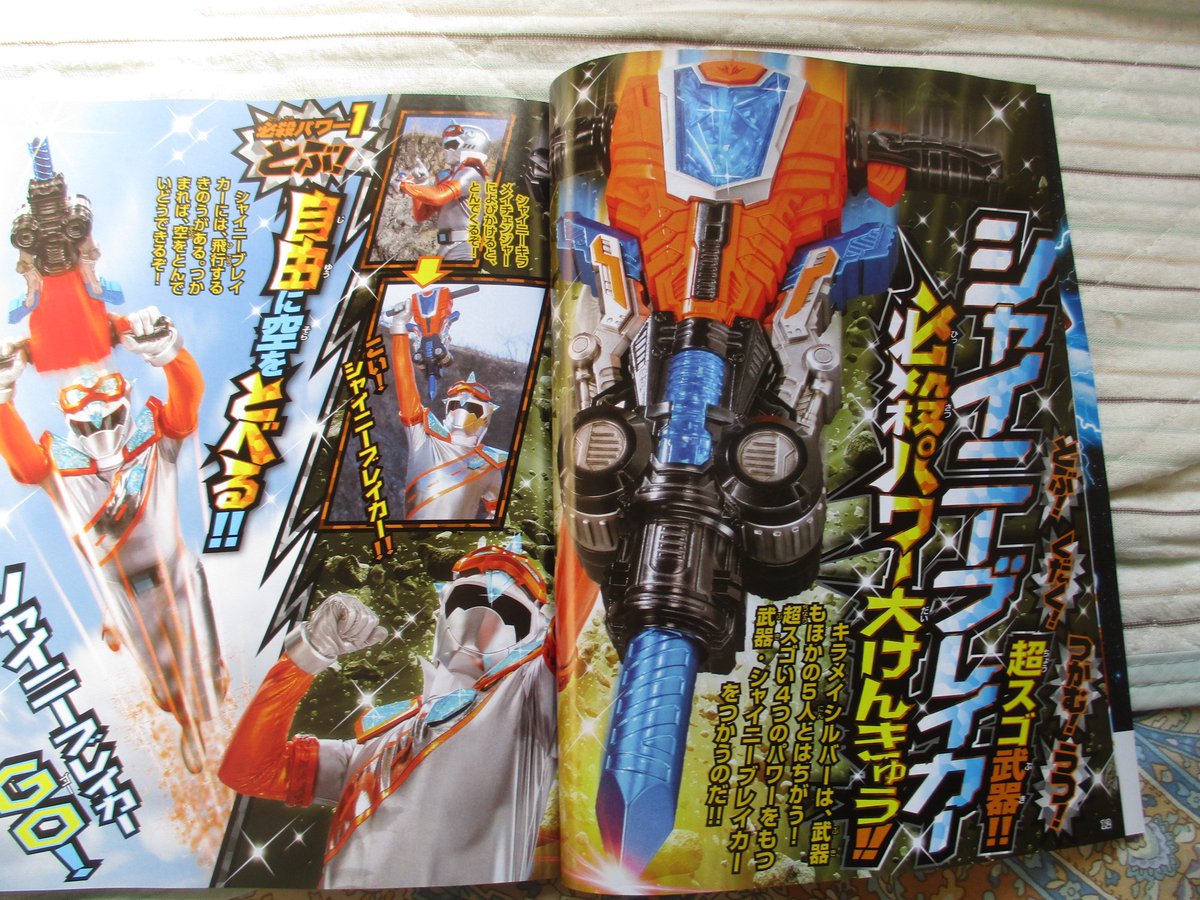 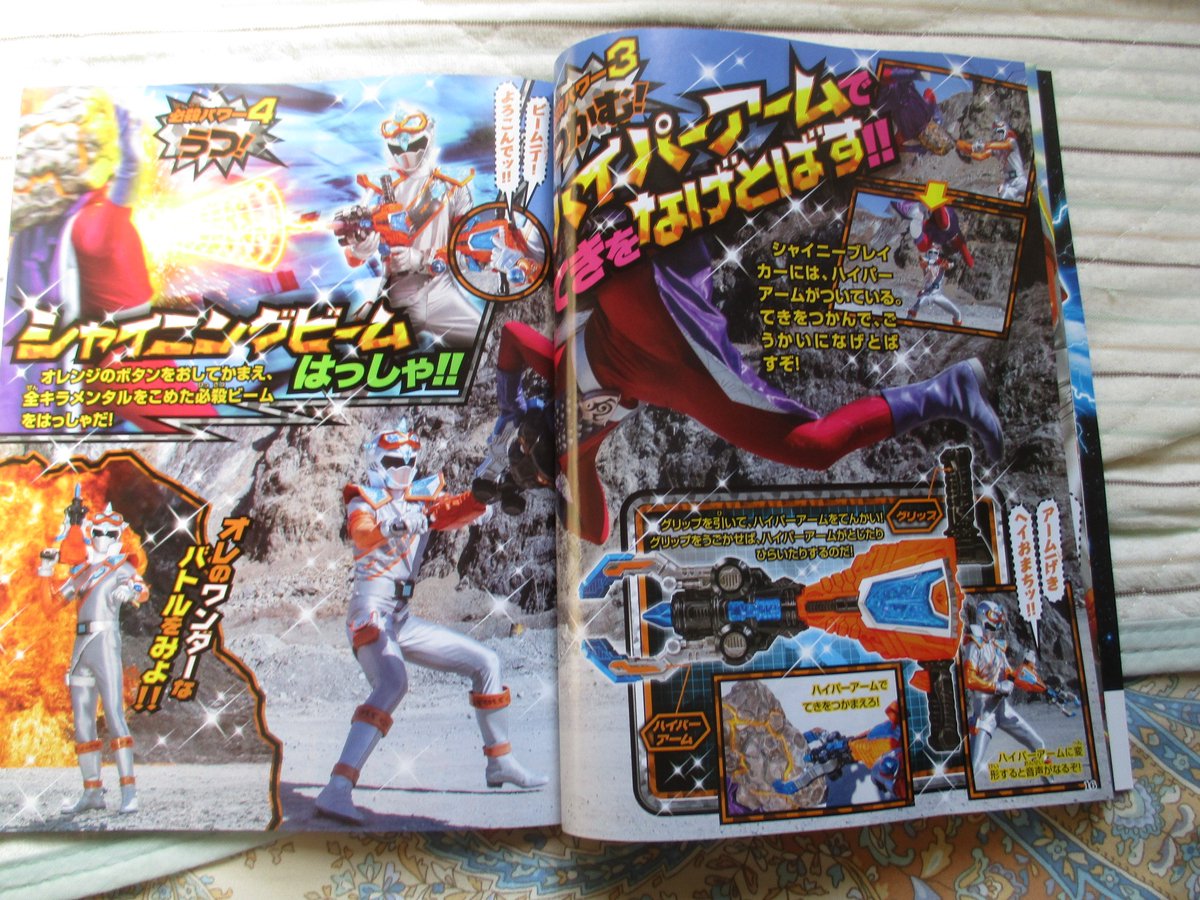 ​
The reveal of treasure hunter Takamichi Crystalia a.k.a. Kiramei Silver. These aren't all the photos but I've only seen the rest on twitter and this site has suddenly stopped letting me link to photos from twitter (boo hiss).

Kainsword17 said:
Ok, I have a question. What on earth is this thing?
Click to expand...

It's called the MonStone and is some sort of monster made from a Kiramei Stone. I've seen rumours that it might somehow be turned into Kiramei Silver's mecha, as it's appearing at about the same time.

​
The reveal of treasure hunter Takamichi Crystalia a.k.a. Kiramei Silver. These aren't all the photos but I've only seen the rest on twitter and this site has suddenly stopped letting me link to photos from twitter (boo hiss).

It's called the MonStone and is some sort of monster made from a Kiramei Stone. I've seen rumours that it might somehow be turned into Kiramei Silver's mecha, as it's appearing at about the same time.
Click to expand...

Whew I was on Jefusion when I first saw the Kiramei Silver pictures and the picture of him wearing the goggles wasn't there. So at first I thought it was just for aesthetics. I like the suit, it reminds me of Gao Silver and Kyoryu Sliver. I can't say Toei wasn't original enough with the weapon and changer this time. I still can't figure out what the changer is suppose to be based on and a jackhammer as a sentai weapon is pretty wild in a good way.

The shoulder pads remind me of Bouken Silver and the amount of orange on the suit reminds me more of Geki Chopper. The shape of the goggles and the way he's holding them over his visor remind me Ultra Seven's transformation!

I can't figure out what the changer is meant to be either. It looks like there's a snowglobe filled with crystals similar to those ones Mabusheena cried to make Gemini. But it's mounted at an angle. Then there's a disk that I presume spins (and maybe stirs the rock fragments in the snowglobe?). I dunno what's going on there.

I'm not 100% convinced by the orange forearms but things always look different when you see them in motion.

Silver and orange are a bad color combination.

Wasn't the sixth hero going to be black, though? I suppose with a show like this, another gold/silver hero would be expected, but it's getting to be very predictable and boring.

(By the way, I always thought Starninger from Ninninger should have been silver or black instead of gold. It would've meshed better with the red-blue-yellow-white-pink palette.)

Black Fang said:
Wasn't the sixth hero going to be black, though? I suppose with a show like this, another gold/silver hero would be expected, but it's getting to be very predictable and boring.
Click to expand...

That was just a rumor that Lord Garza was going to turn good and become Kiramei Black. Although considering how early we are into the series, I wouldn't cross out the possibility that he won't turn good down the line and have a ranger form just like how his Dino train turned good.

I don't mind the silver and gold combination, especially when the silver is so nearly white anyway.

Silver was the obvious choice though, given the whole 'sparkle' thing going on with this season. Isn't the Japanese word for silver basically the same as the word for gleaming or something?