Earlier this month, Cartoon Network aired The Crossover Nexus, a special episode of OK KO that united characters from Steven Universe, Teen Titans Go and Ben 10…and also contained references to EVERY SINGLE original cartoon CN has ever aired, as well as past promotional campaigns, branding and show blocks. The new mobile game Cartoon Network Party Dash doesn’t go quite as far, but like OK KO, it unites three shows in one.

Specifically you control a cast taken from The Amazing World of Gumball, Ben 10 and We Bare Bears in a smash-and-dash platformer where you descend endless floors and take out enemies with your special moves. Gumball, Darwin, Anais, Penny, Grizz, Panda, Ice Bear, Heatblast, Four Arms, XLR8 and Shock Rock are all playable within the game. 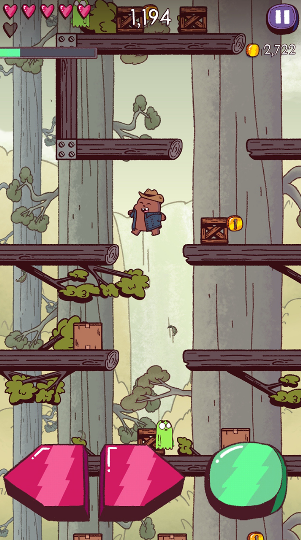 When a bunch of villains crash a party hosted by Ben 10, the Gumball crew and the We Bare Bears siblings, it’s up to you to crash back! Cartoon Network Party Dash is a blast to play with fast-paced, hard-hitting action – descend floor by floor, smashing and rebounding through enemies across a variety of levels, including the forest, junkyard and desert island. Unlock powerful gear and perks to help you reach new levels and even higher scores, and customize each character with their alternate outfit!

Cartoon Network Party Dash is downloadable as of today on the App Store, Google Play and Amazon…any iOS or Android compatible phone or tablet can play it. It’s free, but contains ads and in-app purchases.