Welcome To The Circle Coming from Devilworks

Distributor Devilworks is giving us what they call “Phantasmagorical Canadian Supernatural Horror” in the form of Welcome To The Circle, a horror flick from the North to be released Stateside soon.

This tale begins the way a lot of these begin: two innocent people wandering deep into the secluded woods where nobody will find them. There, they run into a cult who seeks to brainwash the young girl and turn her into one of them. Now trapped in the compound, it won’t be as easy to get out as it was to get in.

Welcome to the Circle has some interesting poster art. It’s hard to nail those “follow you around the room” type of paintings that so many horror films want so badly, but this does the job: 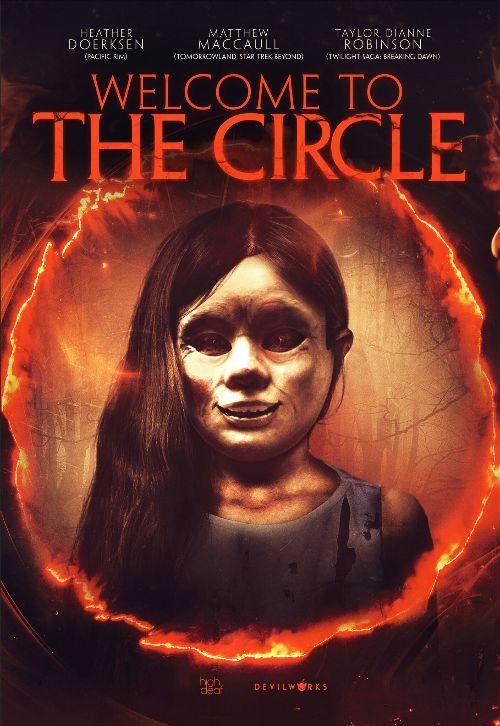 It’s actually a mask, but what makes this work is that you can’t tell when one facial feature ends and another begins. Her eyebrows melt into her black eyes. You can’t tell if that’s her teeth or if she has a cracked upper lip. She’s proportioned deliberately wrong and it’s very Uncanny Valley all-around, for a perfectly creepy effect. Bravo, Devilworks.

Welcome to the Circle stars Heather Doerksen (Pacific Rim), Matthew MacCaull (Tomorrowland, Star Trek Beyond) and Taylor Dianne Robinson (Twilight Saga: Breaking Dawn). It was written and directed by David Fowler (writer of ‘Born in China and Penguins documentaries). What we don’t have is a release date — it’s mentioned nowhere in the press release. We can assume it’s coming soon though.

Phantasmagorical Canadian Supernatural Horror ‘Welcome to the Circle’ tells the story of a young girl and her father who fall prey to a secluded, madman-worshiping cult situated deep in the woods. Trapped in a maze of demented mind games and deadly supernatural rituals, their only chance of survival seems an impossible task: Escape The Circle.

Not only did the concept of battle royale originate in Japan with an international hit movie, they also have their own version of the ouija board called the Kokkuri. Why not combine both those things and see what happens? Tokyo Bay Films had that idea and came up with Ouija