Spider-Man Across The Spider-Verse Presents…THE SPOT!

Who’s behind the dimension-hopping shenanigans in the anticipated sequel Spider-Man: Across The Spider-Verse? Director Christopher Miller revealed the answer today. He’s a very Dalmatian-looking man.

Miller and co-director Phil Lord have picked the obscure Spidey villain The Spot to be one of the center characters of the movie. Spot has the impressive ability to create holes that lead anywhere on any surface, including himself (as he has done several times). Though he looks intimidating in the concept art shown off today, The Spot in the comics is kind of a joke: 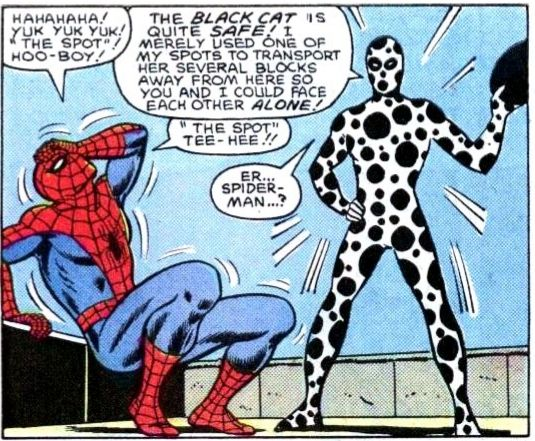 But maybe now’s his chance to get some respect. Actor Jason Schwartzman has been cast as Spot.

“For those who are not hardcore canon nerds, The Spot is one of the deepest cuts in Spider-Man’s rogue gallery,” admitted co-director Kemp Powers to the crowd at the Annecy International Film Festival, where Spot got his official reveal.  “But he has a super-power that really excited our entire team: his entire body is covered in little interdimensional portals that can send him anywhere he wants to go.”

This kind of power not only blended perfectly with the movie’s multidimensional premise, but with the animation style they’re using. “We thought it would be really cool if the portals felt like living ink that had spilled or splattered on the comic artist’s drawing. His very simple power provided endless exciting challenges and permutations for our team.”

Shameik Moore, Hailee Steinfeld, Oscar Isaac, and Issa Rae are returning to voice their characters — alongside Spot — in Spider-Man: Across The Spider-Verse, coming June 2, 2023 (still too far away).