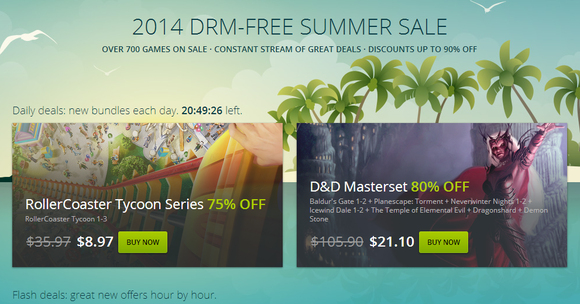 While E3 and all of its exciting new content may be winding down a bit with the convention’s end, PC gamers will probably be happy to learn that summer shopping frenzy has begun.

GOG.com a computer game distribution company run by CD Projekt RED has announced the onset of its 2014 DRM-free summer sale on GOG’s catalog of more than 700 titles at  discounts over 50% off of their original price.

“Almost all of our catalog has been discounted by 50 percent,” GOG explained in its kick-off announcement. “Each day we’ll present you with at least two special Bundle Deals with a selection of great classics and indies available up to 90 percent off.”

GOG.com focuses on more classic titles than the Valve’s Steam service, but still hosts a number of more recent games that gamers looking for a good deal may be interested in perusing. Games like Tesla Effect: A Tex Murphy Adventure, Don’t Starve, Wizardry 8, and The Witcher 2: Assassin’s of Kings are currently on sale along GOG’s usual classics.

For those who want to wait for Steam’s summer sale they may have to wait till later in summer as Valve remains quiet on when they plan on joining the summer sale season.

You can go ahead and the deals out for yourself by following this link: http://www.gog.com/