Walt Disney Studios and Pixar released a number of new details along with the full cast for the next potential Pixar animated masterpiece, Coco. You can check out the full cast list and profiles for the characters below, along with a new poster image.

The film is described as “multi-generational story about the power of family relationships” and characters going to the Land of the dead. Young Miguel, voiced by Anthony Gonzalez, is an aspiring musician who meets the charming trickster named Hector, voiced by Gael Garcia Bernal. There’s also the musical icon Ernesto de la Cruz who is voiced by Benjamin Bratt. The new feature is directed by Lee Unkrich, the co-director of Toy Story 3, and Adrian Molina, and it arrives in theaters in November.

Speaking on the film in an official press release, Unkrich stated: “These parallel worlds couldn’t be more different. One is the Rivera family’s charming and hardworking hometown of Santa Cecilia, and the other is the vibrant, rich land where loved ones go when they’ve passed. ‘Coco’ introduces characters from both worlds on the eve of Día de los Muertos—one extraordinary night when a living boy named Miguel gets a glimpse of the other side.”

Molina added: “Our voice cast is incredibly talented, helping to shape our eclectic group of characters. Each actor has told us they find something relatable in this film, so they’re finding it easy to capture the heart of this story—it’s all about family, so we hope that these characters will resonate with everyone.”

FROM THE LAND OF THE LIVING

FROM THE LAND OF THE DEAD 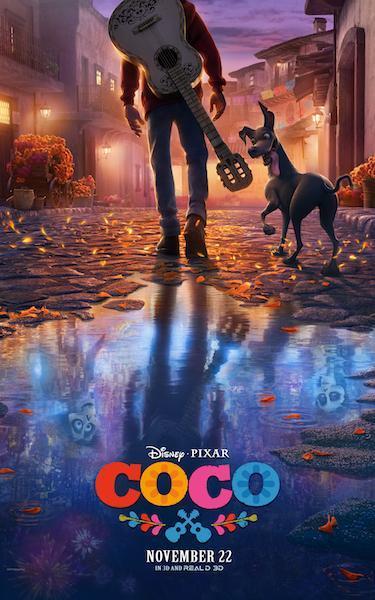 Jeffrey Harris, a movie, TV, video game, pop-culture, and UFC/MMA aficionado, resides in Los Angeles, California. He is a graduate of The University of Texas at Austin's Radio, TV, Film program. Jeffrey is a dedicated pop-culture geek and UT Orange Blood.
The Legends Of Tomorrow Are Teaming Up With Isis Guardians Of The Galaxy 3 To Potentially Expand Marvel Cosmic Universe

Dug Days, Sequel for the hit movie Up

Dug Days is coming to Disney Plus this September. It is a Series of Animated shorts that will continue the story of Up. Dug will be the central character of the show but Russell and Carl will still appear as recurring characters. Dug Days Trailer Up is a very memorable

https://www.youtube.com/watch?v=mwoQuIhEVJI Pixar’s Luca has released its first trailer. This upcoming Disney film is going to be Pixar’s 24th motion picture! Their Legacy will continue with this upcoming future classic. It is stunning because it gives you a glimpse of what life is like at the Italian Riviera. Previously,We get to

Chris Evans just bagged his 3rd Superhero role! Who is he going to play?

After playing The Human Torch and Captain America, Chris Evans will play another Disney Property hero. Chris Evan just announced on his Twitter and Instagram account that he will be Playing Buzz Lightyear. Sure it will be a lot of pressure because Tim Allen made this character iconic. He won’t

For the first time in several years, we’re getting two Pixar movies within one year. 2020 will see the release of Onward, about a magical community that’s become domesticated, in March — and then three months later, we’ll get Soul, the latest from director Pete Docter. Pete is responsible for