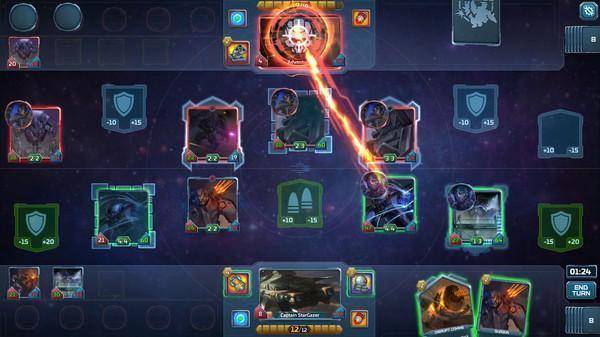 Cosmos Invictus is a tactical game that requires serious strategy. You’ll be choosing one of two sides in battle: the Gaia Unity or the High Frontier Alliance, each with its own unique fighters and card sets. Positioning your mechs in the right formation, choosing the right ships and weapons, and most importantly, deciding WHEN to launch your attack….all these things make the difference between failure and victory.

“Cosmos Invictus stays true to hard sci-fi with a realistic backstory and setting not unlike beloved TV shows like The Expanse,” says Kostas Vlassis, CEO and founder of Pegino. “The game offers players a unique blend of strategy and fun – with innovative CCG gameplay, fully-customizable ships, and the addition of ‘hero’ units (mechs) that can actually perish in battle and leave your spaceship exposed to deadly counter-strikes. You’ll find all this and much more in Cosmos Invictus.”

Cosmos Invictus launches today on Steam Early Access, at a price of nothing — meaning lots of in-app purchases. Download it through this link!

The Chrono Trigger Steam Port Has Been Patched And Improved

Wunderling Launches On Steam And Switch

The Surge 2: Symphony of Violence Trailer