Brave The Worst Dungeon Of All In Dungeons & Deadlines

Most people play RPGs to escape the slings and arrows of the real world, but the new PC video card game Dungeons & Deadlines takes the opposite approach.

You’re working an awful job and must balance career, home life and your own sanity. Your cruel bosses want to milk every last dime out of your hard labor, and you can be assured you’ll only be collecting 1/67th of what that labor is worth. Worse yet, you’re on probation and will be fired if you can’t make it 62 days in a row. You’ll see one of five different endings depending on whether you accomplish that or not. 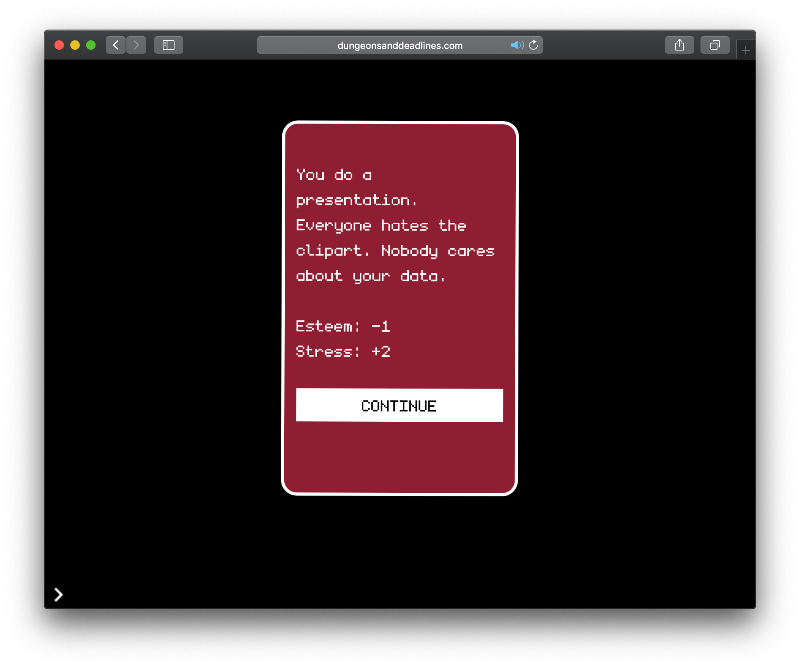 The game was created by Miles Matrix, a man of many talents…he composed the soundtrack himself, and has composed several synthwave projects in the past. He’s also created several video games in Twine with titles like “American Angst” and “Jehovah’s Witness Simulator.” Catching a theme here?

Yes, “Capitalism Stole My Virginity” is the actual title of a song. Look up the video; it’s got go-go dancers.

Dungeons & Deadlines was released yesterday and is available now at at dungeonsanddeadlines.com or itch.io.

Pathfinder: Wrath Of The Righteous Launches Kickstarter February 4 Trust Me: A Witness Account of The Goatman – Horror Short Film Review