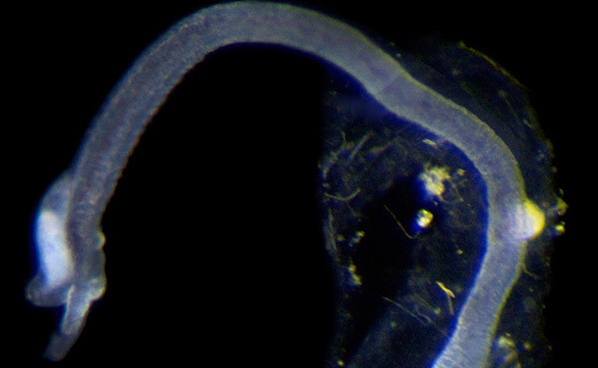 The Osedax family of bone-eating worms is already pretty strange. The females attach to whale and other bones through snot like structures and devour them. And the males? The males are microscopic dwarfs that live by the hundreds inside the female’s body.

At least that’s the way it worked in the Osedax found since their discovery 12 years ago, but scientists recently found a new species of Osedax that’s even stranger from an evolutionary standpoint, Osedax priapus.

Found at a depth of 700 meters, the new species has abandoned the dwarf state and has males that are almost the same size as the females. They live separately and also attach to and eat bone.

“Evolutionary reversals to ancestral states are very rare in the animal kingdom,” said coauthor Robert Vrijenhoek of the Monterey Bay Aquarium Research Institute. “This case is exceptional because the genes for producing full-sized adult males should have deteriorated over time due to disuse. But apparently the genes are still there.”

But hey, they still have to mate, and it’s tough to find companionship when you’re anchored to bone. And this is why Osedax “priapus” is named after a Greek fertility god that sported a permanent erection. The male’s whole body is designed for mating.

“The evolutionary solution (the new species) found was to actually make the male’s body very extendable so he can reach far out to find females to mate with—he can extend his body ten-times its contracted state,” said Rouse.

Yes, if the male Osedax priapus could drive a car, he’s drive an economical compact car and wouldn’t feel any self-esteem issues at all.

“This worm was weird enough as it was and now it’s even weirder,” Rouse said. “This shows us that there continue to be mysteries in the sea and there is still so much more to discover, especially since we only found these creatures 12 years ago.”