When Black Panther: Wakanda Forever was released in theaters, alt-right comicgaters on YouTube predicted that it would be a commercial flop. These grown men make a living by claiming that any film with no protagonist who is a straight, white, cisgender male is “woke.” Last year, they predicted that Shang-chi would bomb at the box office, but Simu Liu made them look foolish instead. I’m not sure where these people are getting their money, but I do know they’re doing it for the attention. Strong female characters and minority representation made some Geeks feel as if their “safespace” was being taken over by these forces.

It wouldn’t surprise me if their target audience is. The people who gave Miss Marvel and She-Hulk negative reviews on IMDB. They did that before the shows even aired. People act like piranhas whenever Disney or Marvel release a new film because they want to sink their teeth into every crevice and nook they can find. 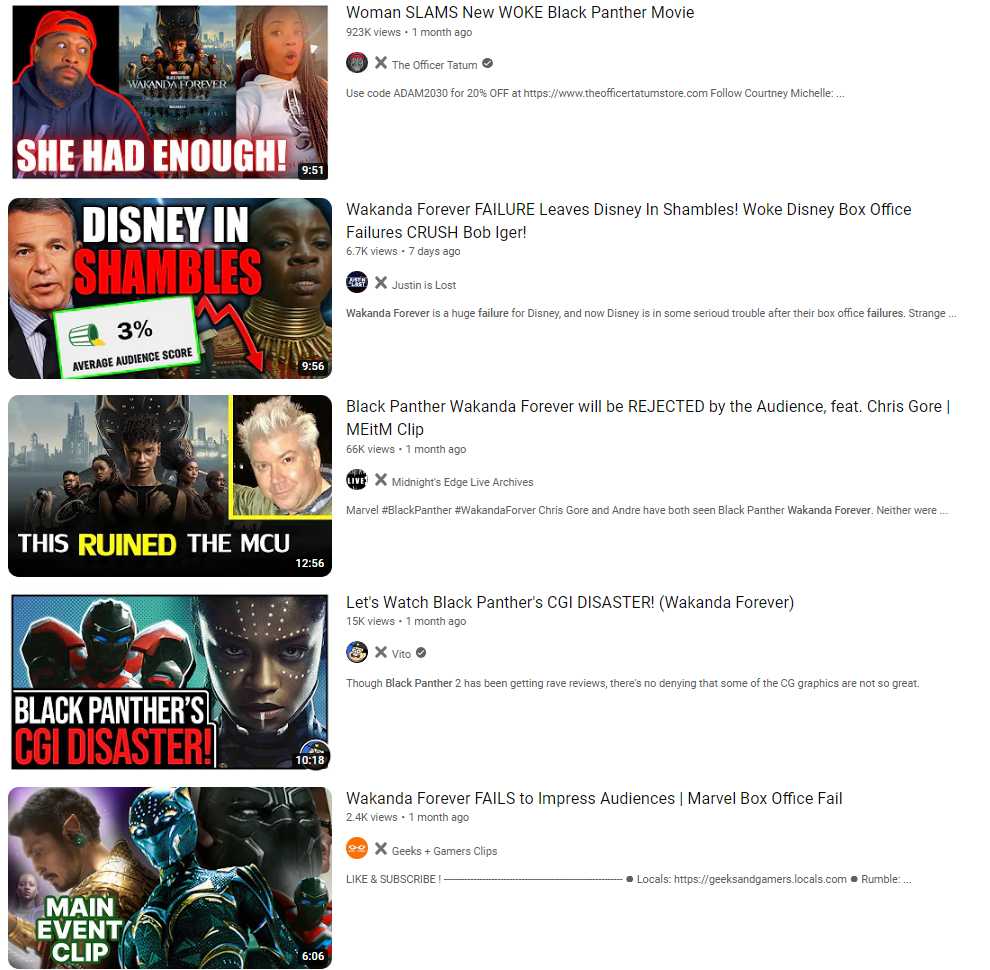 Disney is far from trouble as these   “Geek Bros” and “Pick me girls” had been accusing.  Wakanda Forever made $787,135,551 and that is without the Chinese Box office. In USA alone it made $418,938,028. The unexpected death of Chadwick Boseman changed their plan.  So they have to make changes. Disney decided to pass the mantle of Black Panther to Letitia Wright who plays his sister Shuri.

There are fans who prefers  T’challa to be recast but  Kevin Feige and director Ryan Coogler prefers not to. They want the second film to be a tribute for him instead because  it felt too soon to replace T’Challa.

These self proclaimed critic changed their Focus to Avatar: Way of the Water.

It is rumored that it has to make $2 Billion to break even. I think it will break even because it is currently $441,703,887 in the box office in just few days.

Avatar: Way of Water surpassed $2.024 Billion in the box office!

I want this to make a billion dollars but its hard because of China's situation.

I even saw one saying Black Adam will destroy Wakanda forever in the Box Office. LOL it aged like Milk!

When I watched it, Everyone in the theater are crying. I wonder how different the script would have been if Chadwick didn't die.

The lengths to which these Top heads in Marvel went to honor Chadwick Boseman were, without question, extraordinary. Though I don't like Letitia Wright on a personal level because she denies the existence of Covid19,but I am so proud of her for the way she honored Chadwick's memory through her performance in this film. For the foreseeable future, I look forward to watching her as the new Black Panther in the Marvel Cinematic Universe. The film received an A Cinemascore, and it won't have any serious competition at the box office until Avatar 2. That's a solid showing, even without the film's main character and star, if you're concerned about box office returns.

Though I had my doubts before watching, I was pleasantly surprised by the film's quality writing and the acclaim for Chadwick Boseman's legacy. This concludes what has been a rather chaotic fourth phase. I'm one of the people who wants to see T'Challa replaced with another actor but this movie proved me wrong. The closing montage featuring Chadwick Boseman had me in tears.

Those who wanted this movie to fail are now feasting on dust. Audiences need to adjust to the new Normal, in which not every film must make $1 billion to be considered a success.Wakanda Forever is a financial success on all fronts. It's safe to assume that by the time the film's run is over, it will have made at least a billion dollars. Due to the absence of major markets like Russia and China, the film is not likely to finish in the top three or four of the year's box office. Something can only be called "divisive" because people have agendas.

That's fantastic! Considering the hardships the cast and crew of this film endured, a final tally around $850 million would be nothing short of miraculous. Given that there is no China release, the film's success is especially remarkable given that most Marvel movies fail to reach the billion-dollar mark.

As good as, or better than, Spider-Man: No Way Home, this is easily the best film of Phase 4. On the other hand, I only give a 6-7 to the majority of the newer MCU films. A lot of people seem to think the movie is really sad and miserable. Unlike many other recent blockbusters, this one actually had a plot, developed characters, was expertly directed, and featured top-notch performances from start to finish. T'Challa isn't the focus of this Phase, but his legacy and torch-passing to the next generation seem to be major themes, so that makes sense.

This is an emotional and moving movie, I never thought I will feel like this for a Supehero film.

The comicgaters are targeting Avatar at this moment. It is their usual mumbo jumbo of accusing things of being woke.