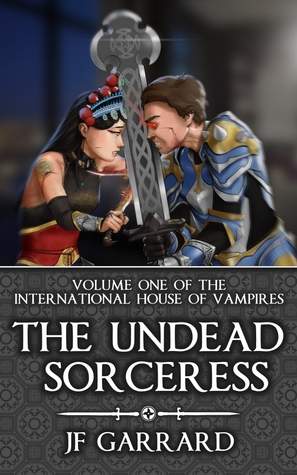 Last October, author JF Garrard was raising funds for The Undead Sorceress, a multicultural urban fantasy novel — and the first book of a series called The International House of Vampires — on Kickstarter. She ultimately met her goal and received over CAD$3,000 from a total of 69 backers.

The Undead Sorceress tells the story of a young mother trying to save her daughter’s soul from her grandmother who has made the choice to live eternally. The vampires in this novel, however, are a tad different from what we’ve read so far — they suck chi and sword fights. There is magic that “follows the rules of the Tao and robots with human souls.”

Ever since Twilight graced us with an appearance on the big screen, there has been an overwhelming response to the number of books in the vampire genre. So many in fact that a lot of us have difficulty in making a mental note of the titles. What makes The Undead Sorceress a little different from the crowd is that it brings diversity to the table.

“When my grandmother had a stroke, I asked the gods to take the years of my life in exchange for her health. After recovering from this incident, my grandmother told me I was stupid to pray for such things. This traumatic incident inspired me to write a story in which a grandmother does want to live forever and asks her descendants for the ultimate sacrifice.” — JF Garrard

The urban fantasy novel focuses on themes that we desperately need in the publishing industry.

“It’s a multicultural, diverse fantasy book because there are different genders, ethnic groups and disabled characters.” — Book description on YouTube

Garrard cites Stephen King, Ray Bradbury, Anne Rice, Neil Gaiman and Rumiko Takahashi as her influences. The author has a Nuclear Medicine background and holds a MBA in Strategy/Marketing.

The Undead Sorceress hit the number one spot in the categories of Asian Fantasy and Asian Fiction on the Amazon Kindle site. If you’d like to find out more, check out the book trailer below!

Phantom Gear: A New Game For The Genesis