If you want the original arcade action of Street Fighter II, you have many options ranging from most expensive to least. You can buy the original arcade cabinet, have it shipped home, find space for it, and pay a gazillion bucks. You can choose an Arcade1up replica for around $299 to $399 depending on a sale. But there now exists an even cheaper option….an arcade unit that costs $119.99 MSRP.

You just have to make some size compromises…it’s 12 inches tall. Maybe, like Arcade1Up, they make a riser. 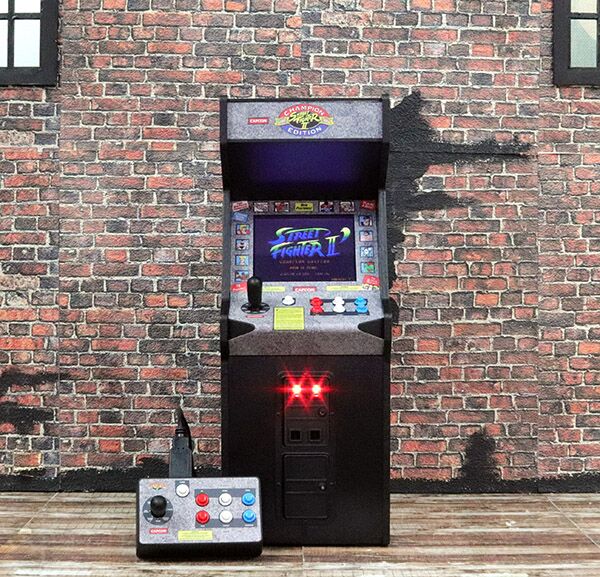 Seriously though, New Wave Toys’ line of RepliCade cabinets is more for collectors than diehard arcade gamers that like squinting at a tiny screen. Their new Street Fighter II replica looks like a model, but it’s actually functional and fully playable. It even supports two players.

How, you may ask? Wouldn’t it be tough for two people to huddle around this thing? Well, the RepliCade supports controller attachments, and comes with one: the USB Mini Fight Stick. You can use any other controller that is compatible, though.

The Street Fighter II RepliCade is now available for purchase at newwavetoys.com. It comes with the machine, one fight stick, a USB charge cable, an operator’s manual, and even tiny tokens you can shove into the thing.