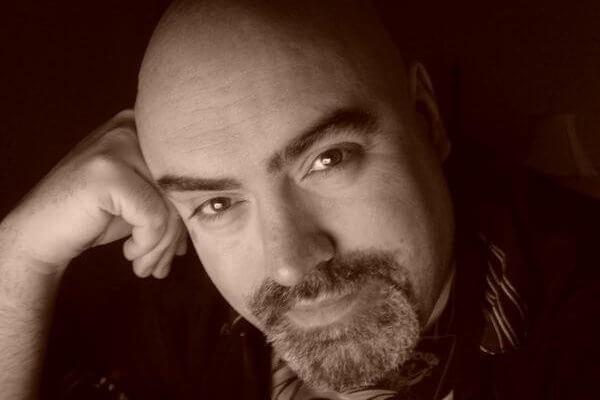 Earlier this month at the Anime Expo, Pop Geeks had the opportunity to sit down and speak with the incredibly talented voice actor Kyle Hebert, the star of such mega franchises as Street Fighter and Dragon Ball Z. You will get the chance to hear Hebert in the upcoming limited theatrical release for the new Dragon Ball Z anime feature film, Dragon Ball Z: Resurrection ‘F’, which is set to hit theaters soon. In addition, Hebert returned as Ryu from the Street Fighter franchise as a crossover character for the smash hit series, Super Smash Bros. for Nintendo Wii U. Hebert has also played such characters as Kiba in Naruto and Naruto: Shippuden, Kamina in Gurren Lagann, adult Gohan and numerous other characters in the Dragon Ball franchise, and Scientist Supreme Lyle Getz and the Super Skrull in Avengers: Earth’s Mightiest Heroes. Here is what Kyle had to say on some of his recent and upcoming projects:

Dragon Ball: Resurrection ‘F’ will be premiering in theaters soon. And you will once again be voicing Gohan?

Kyle Hebert: Yeah, Gohan’s definitely in there. Happy to return to the franchise yet again, and I’m sure we’ll be packing the theater for the premiere and the theatrical run in August.

It’s so amazing that Dragon Ball Z does not have nine lives, it’s got a million lives.

Kyle Hebert: So many.

That’s pretty amazing, and then something struck me. What struck me is that over in Japan, it is like The Avengers or Teenage Mutant Ninja Turtles. So I mean, you could really do new things with the property really as long as you want because it’s part of the culture, the lexicon. It’s like that not just there, but globally.

Kyle Hebert: It’s great because social media has made it possible to get the live pulse of people in any moment, anywhere in the globe, and it’s really interesting to see how impactful Dragon Ball Z is from a pop culture standpoint. Even to this day, when its heyday was the late 90s/early 2000s, but people have since grown up and they’re introducing their families to anime and those tentpole franchises.

I don’t know if it’s the passage of time, but the new material seems to have much stronger writing, if that makes any sense? The character interactions, reactions and emotional states just come off as, not necessarily more realistic, but more relatable and organic—

Did you feel that at all when you were doing Battle of Gods?

Kyle Hebert: Yeah. All that stuff, Chris Sabat says, “You know, I as a director can just put it on autopilot because all of us on the cast have spent so many years with the characters that we know what to do and what to expect. In whatever situation happens to a character, we’re not just in a typical situation where we’re blind, “Hey, what’s going on?! What do I do now?’” We kind of just inhabit the skin of these characters. It’s remarkable. Starting with Dragon Ball Kai, getting to revisit those re-mastered episodes and getting a second chance at dubbing it again, this time with a faithful script to the manga and the original Japanese anime show.

I think my favorite part of Battle of Gods was not even when they were fighting, but when they were all just hanging out and having fun partying. It was fun and a little weird, but there was something charming about it. Pilaf was there and trying to cause mischief and generally failing. Gohan finds out he was going to be a father. It was all very fun and sweet.

Kyle Hebert: Yeah, genuinely touching. A sentimental moment that kind of came out of nowhere. This is all cute and nostalgic, and then “Oh wow!” Just having that moment that wasn’t really explored in the series, but now we have that. And now, looking forward to [Dragon Ball] Super, the new show, we’ll get to kind of take it in a different direction than GT did.

So are you confirming you will be working on Super?

Kyle Hebert: I am certainly hopeful. I don’t see why not.

So that leads me to my next question. You’ve played adult Gohan in just about every iteration of the show in English for over 10 years. So do you have a clause at Gohan? Do you get first crack at him? Or do you have an unwritten agreement with Chris Sabat and Mike McFarland for Gohan? Or do you have to audition for Gohan over and over again?

Kyle Hebert: I don’t have to audition, but I kind of treat it on a case-by-case basis because there are sometimes creative decisions. On Kai, there’s a different narrator. There’s a different Frieza. They could have easily replaced me as Ox King, but I will get to come back if we can do the Buu Saga then Gohan’s in there. Then Chris Sabat promised me and said, “Yeah. We’re going to let you come back in that respect.” And now with two films, two of the newer films, yeah I just jump at the chance. They come and me and say, “Hey, we got a new show. We got a new movie.” And I’m always chomping at the bit saying, “OK. When do I need to record?” Right because Dragon Ball Kai originally ended with the Cell Saga, but I think they decided to go ahead and continue Kai with the Buu Saga too.

Kyle Hebert: That is my sincere hope that we can get everything done because obviously there is a rabid fanbase going for it. And Gohan especially, that was my earliest main role ever back in 2000. And to have a chance to redo all of that with 15 years of acting experience under my belt now, whereas that was my first major thing. I think I’ve come a long way as an actor.

Kyle Hebert: It is a lifetime for many anime fans.

Is it is the same thing with Ryu in the Street Fighter franchise? Is it case-by-case? Or do you have to audition for each new iteration?

Kyle Hebert: Not necessarily audition. Once I tried out for Street Fighter IV, they said, “We’re looking to have a consistent English cast from this.” While I don’t want to just assume anything, at least any time that he’s shown up in Street Fighter games or any sort of crossovers or anything like Tekken and –

Kyle Hebert: Wreck-It Ralph even, with Disney sort of searching me out, saying, “Hey! We want a voice here.” And me going, “OK!” I will always gladly be involved because it’s such an iconic character and franchise just like Dragon Ball is.

Kyle Hebert: Yeah. Hey, Capcom? I’m waiting for the call, yo! You got to make it happen.

So how was it getting to do Ryu in Super Smash Bros.?

Kyle Hebert: Right? Isn’t that the coolest? When that happened, it was three months ago. I was approached by Nintendo. Obviously, I sign all these non-disclosure agreements, so I can’t talk about it until it comes out. On my birthday, June 14 of this year, my girlfriend waited for me to wake up and said, “Hey! Exciting news! You’re announced on Super Smash Bros.!” I was like, “What?! What?! Really?!” And then I got linked to it, and it was downloadable that, before E3 even happened. So, super, super happy about that.

Are they going to send you like a case of Amiibos for that?

Kyle Hebert: Hey, I wouldn’t say no. I so rarely get merch from things I’m on.

Can you tell your agent, “Put it in! I want an Amiibo clause.”

Kyle Hebert: I think I will actually. I’m going to have to get more space for all the new collectibles. You’re a big geek guy, big Joss Whedon fan. What were your thoughts on Avengers: Age of Ultron?

Kyle Hebert: Age of Ultron. It kind of felt like a more studio controlled thing. I’m not going to say it was a bad movie, I enjoyed it. It was very enjoyable, but it didn’t necessarily have the Whedonesque touch. And there was the controversy and debacle over Black Widow’s this and that, and I was like, “Really?” … but I actually kind of liked the banter they had going with Hulk and Black Widow.

I like that too because I feel people – Black Widow has had many relationships and romances with characters in the comics. Just because she’s a strong, heroic figure doesn’t mean she’s incapable of loving someone or having regrets about not being able to physically have children. That doesn’t make her a bad person. She used to be an assassin. Of course she’s going to have mixed emotions about that.

Kyle Hebert: Absolutely. People can read into anything they want. In terms of the sequel, it works really well. My favorite movie that’s come out this year that’s all geeky that made me so happy was Mad Max: Fury Road.

So what was the experience like in getting to play J. Jonah Jameson in Disney Infinity?

Kyle Hebert: *Laughs* That’s pretty awesome. The head casting director at Studiopolis, where we do Naruto and some of the Marvel projects, he came to me and said, “Can you do like a JK Simmons impression?” I said [*in JK Simmons type voice*], “Yeah, sure. No prob. C’mon. Let’s try it.” He said, “Alright. I’m not sure if that’s what they’re looking for. Let’s go ahead and lay down a couple of audition lines.” And I got it. So super stoked, and with JK Simmons being a person of Academy Award winning stature now, I kind of wonder if he’s going to even bat an eye and come back to the franchise. So, hey, I’m here. I can sound like him, and I’m way cheaper! *Laughs* But yeah, another excuse to play in the Marvel world. I’m happy about that.

I always love talking to you Kyle. Thank you and have fun at the Expo.

Kyle Hebert: Thank you. Sure thing.

Kyle Hebert appears as Gohan in Dragon Ball Z: Resurrection ‘F’, which is scheduled for a limited theatrical engagement from August 4-12. The home video release of the film is set for October 7 on DVD and Blu-ray. You can also check out Hebert as Ryu from Street Fighter in Super Smash Bros., which is available now for the Wii U console.