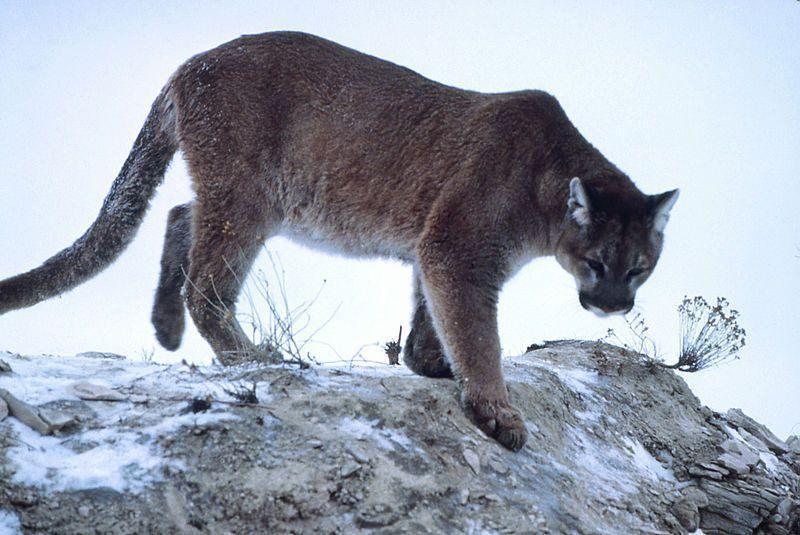 Terrie Williams wanted to study how mountain lions use energy when they hunt their prey. But first, she had to get them to do aerobics.

“People just didn’t believe you could get a mountain lion on a treadmill, and it took me three years to find a facility that was willing to try,” said Williams, a professor of ecology and evolutionary biology at UC Santa Cruz.

Williams needed to get a mountain lion to get physical so she could measure their oxygen consumption at different energy levels and calibrate her experiment to mountain lions in the wild. She finally found three captive animals she was able to test.

Even on the treadmill calibration studies, she was learning things about the cats. Such as the fact that mountain lions aren’t that good at walking on treadmills.

“They are power animals. They have a slow routine walking speed and use a burst of speed and the force of the pounce to knock down or overpower their prey,” she said.

The captive animals were also studied and video-taped in resting, pouncing and other behaviors wearing SMART collars, a new type of wildlife collar that uses GPS, accelerometers and a magnetometer to measure not only where animals are but how they are moving.

In the second phase of the study wild mountain lions were with the SMART collars and data was gathered about their hunting strategies. What was found is that the big cats are quite aware of their long-distance running limitations, and so prefer “cryptic” behaviors like stalking and waiting, saving their energy for the pounce. They even know to use less energy for smaller prey animals, going for a weaker pounce for a fawn than they would for a buck, for example

Study co-author Chris Wilmers, an associate professor of environmental studies at UC Santa Cruz, said understanding how mountain lions hunt furthers the goal of protecting the cats and their habitats.

“Because mountain lions are a cryptic animal, we can’t really observe them hunting and killing prey. With the SMART collars, we can see how they go about doing that, what their strategies are, and how many calories they are expending to do it,” Wilmers said. “The ability to estimate the field energetics of animals in the wild opens up a whole new suite of questions we can ask about the ecology of these animals, which ultimately informs not only our basic understanding of them but also their conservation and management.”