The Might and Magic series has been around for some time believe it or not. It’s had some ups and downs, but more often than not it’s been a solid RPG series. And now, the series has been revived for mobile platforms via Might and Magic Elemental Guardians. A turn-based RPG of sorts that’ll have you leveling up various monsters on your way to become a powerful magic user.

Yeah, that’s right, this is kind of like Harry Potter meets Monster Hunter or Pokemon. In the game, you get accepted to a prestigious magic school, and are taught how to obtain and summon monsters and creatures of various types to put into your party. Then, using them, you’ll travel throughout the realm, battling them, completing trials, and getting stronger with every single victory. All the while unraveling a plot that is standard RPG fair but is good enough on its merits.

Let’s start with the basics, the gameplay. Might and Magic Elemental Guardians relies heavily on its easy-to-use combat system, and it really does work. You can have up to four monsters/creatures in your party, each of which have a basic attack and two special attacks. Knowing when to use these attacks in battle can be vital to your survival, especially as your enemies get stronger and stronger. Making the game even more challenging, the enemies don’t just come out in one shot. They actually come in waves. This adds a lot of strategy in my opinion, because now you can’t just bull rush attacks, you have to think outside the box to get the enemies in the current wave dealt with with as little damage done to your party as possible.

Adding more to the strategy element is that every character has their own elemental attribute. And like any weapons triangle or square, each has a weakness to one type, while having a boost against the other. And, naturally, if you’re fighting against one of your type, you don’t get a boost or a nerf.

While not overwhelming in the style of Pokemon, where you can catch Pokemon everywhere and then have to decide what to do with them, Might and Magic Elemental Guardians does make it a little hard to swap in and swap out creatures. Not because it’s hard to summon them, but it is a little infrequent. That being said, when you do swap out, you do have means of leveling them up quickly. There are ways to level up your creatures outside of battle if you have the right amount of items. Furthermore, in battle, you’ll get experience for your creature as long as you win. Even if they get knocked out, they’ll get experience. This makes it much easier to raise the party you want without having to needlessly grind.

Which, sadly, is a bit of a problem in the game. For while there is a plot, and things do escalate as you go further into the title, it does get very repetitive. You can bank on finding the same types of monsters in every island, just with different attributes. And while new enemies do pop up eventually, the majority repeat themselves a lot. As do the “bosses” of the islands you travel on.

It’s not that it’s “bad” per se, but it does get annoying after a while. Especially when you see evolved versions of your creatures and you want to upgrade them, but you have to wait for a level limit that the enemies clearly don’t have to share.

Speaking of sharing, the game isn’t the best at sharing information. While there is a tutorial at the beginning, you’re soon thrown into the main gameplay with very little explanations on how certain things work. And while big things like Glyphs, choosing your “magical house”, summoning, and other things are explained, little details are not. There are little avenues and buttons that should’ve gotten an explanation but didn’t. I was only lightly told about the achievements page, but didn’t get told just how in depth it was. Fast forward a couple hours later and I somehow had gotten around 30 achievements completed. Which, after accepting all my rewards boosted me from Level 3 to Level 6. I don’t mind not being told everything, but when it’s clear I’m ignoring something in some capacity, a little hit would be helpful. 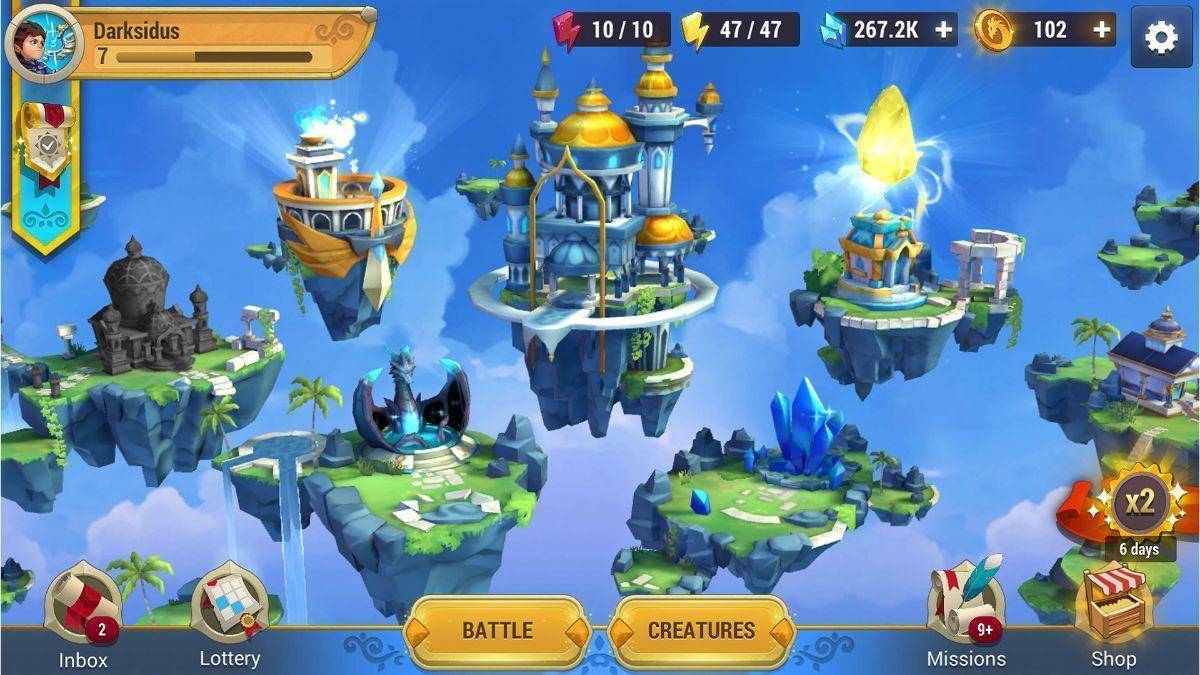 Bouncing back to the positive side of things, I did like the Glyph system. You earn Glyphs by completing levels, and you can put them on your creatures to boost their stats in meaningful ways. One of my newer creatures on my team went from a decent striker to a powerhouse with a few Glyph attachments. Oh, and you can upgrade them as well to give your creature an even bigger boost, which I highly recommend.

I also want to make note of how good the game looks. It really meshes with the fantasy style of the MIght and Magic world, and the creature and human models are all very well detailed. And the animations for the creatures are also well made, they really show off their personalities.

Aside from the main games quest, you will find other things to do in Might and Magic Elemental Guardians, including a PVP arena where you can battle other players. Although, I think it might need a patch because I almost got paired with people that were twice my best characters level, but you can cycle through opponents, and it’s fascinating to see how people not only pick their parties, but also, how they raise them.

In the end, Might and Magic Elemental Guardians by Ubisoft is a fun yet simple strategy RPG that you will likely have fun with. There are some aspects that will frustrate you no doubt, but in the end, it might just be a fun game for you to pick up and put down when you feel like it.