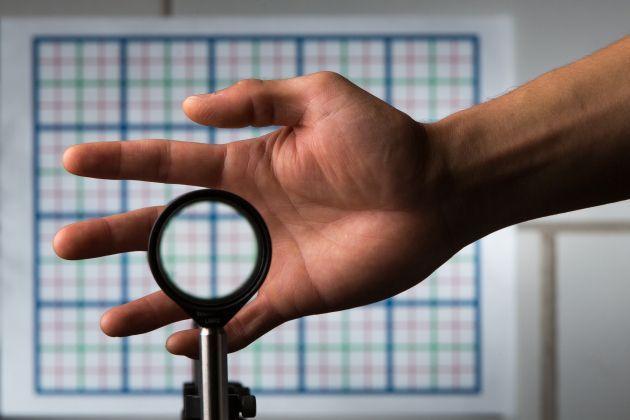 A functional cloaking device, which hides objects as if they are invisible, would probably take all kinds of advanced Star Trek style technology, right? How about four lenses you can buy from a scientific supply store instead?

John Howell, a professor of physics at the University of Rochester and graduate student Joseph Choi took four lenses and made a low-tech but high-concept device that hides an object from direct viewing.

“There’ve been many high tech approaches to cloaking and the basic idea behind these is to take light and have it pass around something as if it isn’t there, often using high-tech or exotic materials,” Howell said.

Their device is actually better than many current attempts at cloaking, because it works several degrees away from the optimal viewing position and doesn’t give itself away by causing the background to shift.

“This is the first device that we know of that can do three-dimensional, continuously multidirectional cloaking, which works for transmitting rays in the visible spectrum,” said Choi, a PhD student at Rochester’s Institute of Optics.

Of course a cloak that only works if you can get someone to look through a small lens wouldn’t fool anyone, but the pair say the device can be scaled up and they are working on perfecting other problems with the cloaking effect with a more complicated design. The biggest problem is that the cloak doesn’t work on objects placed at the center of the device, it only cloaks things in a ring-shaped area around the center.

Howell said the device could have applications for anyone who needs to avoid blind spots, like allowing a surgeon to see around his hands or a truck driver to avoid, um, blind spots.

You can find a press release about the device and instructions to build your own Rochester Cloak here.

Image via University of Rochester