Less Mainstream Games is excited to announce Knights of Ages a thrilling medieval mobile adventure full of rich story reft with intrigue, strategic mercenary, and resource management and turn-based battle. Set in a time that harkens back to the Arthurian legends of old, Knights of Ages will take players on a journey to change their destiny and claim their kingdom for their own.

Knights of Ages features a robust range of almost 20 classes for players to progress through. In Knights of Ages, players will have access to a deep management system, with the ability to craft weapons and armor to equip their troops and form strategic mercenary groups to send into battle to strengthen their foothold in the kingdom. Players will partake in war chess-like battles, directing their troops in turn-based combat and choosing when to strategically change out their troops to keep the tide of battle in their favor. As conflict is never far off in Knights of Ages players will have to choose whether to fight or maintain strategic alliances.

With a focus on rich stories, players in Knights of Ages will be able to create a tale of their own through the game’s marriage and lineage system. By choosing a bloodline and carving out their territory players will also be able to establish their family and pass their kingdom on through generations. Fueling the pride of their family is the player’s unique heirloom, a thing of legend that they will be able to pass on to their successors, continuing the lineage of their characters and cementing their established legacy and lands. 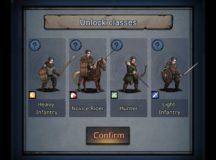 Players will have to manage their kingdom wisely and choose how they want to lead in Knights of Ages as their decisions will affect the morale of their citizens. The in-depth moral system will affect the health and effectiveness of characters, with high morale characters will have advantages such as being immune to fear whereas low morale will place a debuff on characters which persists while morale remains low and has a chance to inflict permanent damage.

Knights of Ages is currently in early access and is available for Android devices by visiting the Google Play Store. With intricate systems and stylized art, Knights of Ages delivers an immersive medieval world for players to explore and conquer.

My first exposure to my newest interview subject, Brie Howard, came when

As a new month begins, so too does a new season in

‘Dandara: Trials of Fear Edition’ Out Now on PS4

Dandara: Trials of Fear Edition is now available on PlayStation®4 from Raw