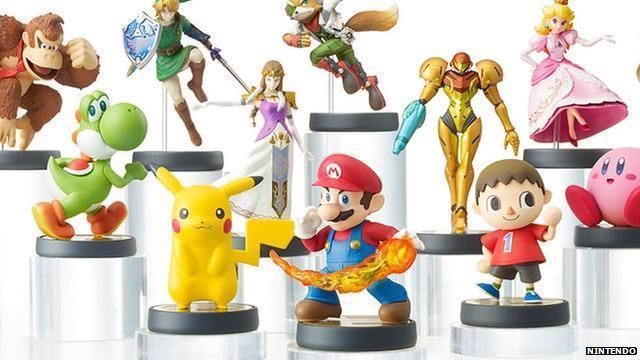 There is an old, long-running joke in cartoons where somebody will mention an idea, his partner will dismiss it, and then he’ll propose the same idea and remark, “How do I think up these things?” This was most famously seen in Duck Dodgers in the 24 1/2 Century, but has been repeated over and over by the likes of Plucky Duck, Timon, and now most recently, Nintendo.

When Activision was developing the Skylanders franchise, they actually went to Nintendo first, hoping to create a co-production that would be a Wii exclusive. Nintendo turned them down, most likely because they didn’t think it up first and it would’ve meant swallowing their pride. Then Skylanders made a jillion dollars, and a Disney knockoff made another jillion dollars, and the big N suddenly thought:

“Wait, I’ve got an idea! Little figures that you press onto a pad to make their likenesses appear onscreen! How do I think up these things, Porky?”
“Abadee-abadeee-I have no idea.”

As of today, alongside the launch of Super Smash Bros. for Wii U, Nintendo’s Amiibos are officially available. Fireball Mario, Donkey Kong, Fox, Peach, Villager, Wii Fit Trainer, Samus, Link and Yoshi are available, with more on the way.

We know why they’re doing this now ($$$$$), but how does corporate-speak explain it? Bill Trinen, Nintendo’s marketing director, told the Huffington Post that players should feel more of an “emotional connection” with the Amiibos they beam into their games. When you fight against the virtual version of the Amiibo, it learns your attack patterns. While this makes it more formidable to fight, it also makes it an accurate partner when you and the Amiibo battle together two-on-two. Is that enough to make you mourn the Amiibo after your dog chomps it up? Trinen would say yes.

Amiibo enhancements are already built in with two released games: Hyrule Warriors and Mario Kart 8. The upcoming New 3DS will also have the ability to sense Amiibo figures.