Beyond Fun Studio announces today the launch of their Kickstarter campaign for the upcoming game Aeolis Tournament. The campaign will last a month, finishing on February 13th. By participating, backers will be able to get the game for a reduced price and depending on the pledge level, unlock exclusive access to the beta version as soon as the Kickstarter campaign ends. 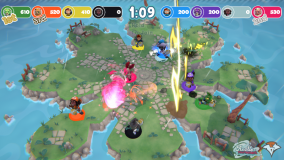 “Use the power of the wind to compete in this charmingly chaotic 8-player party game.”

On top of a reduced price, the Kickstarter campaign participants will have the chance to be actively involved in the development of the game by providing feedback and ideas for new game modes. Also, and as per usual, a great number of unique rewards will complete the incentive to pledge some hard earned money for this amazing project like a digital artbook, the digital soundtrack, an exclusive in-game accessory, a mention in the game credits, a beautiful t-shirt, collectible pins and stickers as well as a signed piece of artwork depending on the pledge level.

Aeolis Tournament is a Nintendo-inspired party game where up to 8 players compete in various game modes based on a simple one-button mechanic. Characters use an air cannon to control the power of the wind and affect their surroundings. It’s a high-tempo game in the vein of Fusion Frenzy with cartoony and colorful art direction. Aeolis Tournament features physics-based gameplay, a tournament mode, local and online multiplayer.

Aeolis Tournament is currently under development and is planned to be released in Spring 2020 on Steam (PC, MacOs, Linux) and Nintendo Switch.