The Walking Dead has been an impactful franchise for some time. What started as a powerful, and gritty, comic, became a super popular TV show. One that even got its own spinoff series not based on the books. But more than that, because of how the world is in Walking Dead, there’s always potential for new stories. Thus, when TellTale Games started making their own Walking Dead game, with their own unique story, many were intrigued. Fast forward a few seasons and a spinoff later, and we’re now on the third season of TellTale’s Walking Dead. While this is my first foray into TellTale’s game world, and even the Walking Dead technically, I have to say that The New Frontier will intrigue those familiar with the series, and those who are new to it.

Note: This review does contain spoilers for the first two episodes of Walking Dead Season 03: The New Frontier.

What makes the TellTale series special is its brand new characters, as about 99% of them don’t have ties to the comics or even the shows. This is especially true of the main series, which stars a young girl named Clementine. However, in The New Frontier, you’re introduced to a man named Javier, aka Javi, and his family. For most of the game, or at least the first two episodes, you play it through his point of view, as well as the struggles he and his surviving family goes through in the zombie filled world. 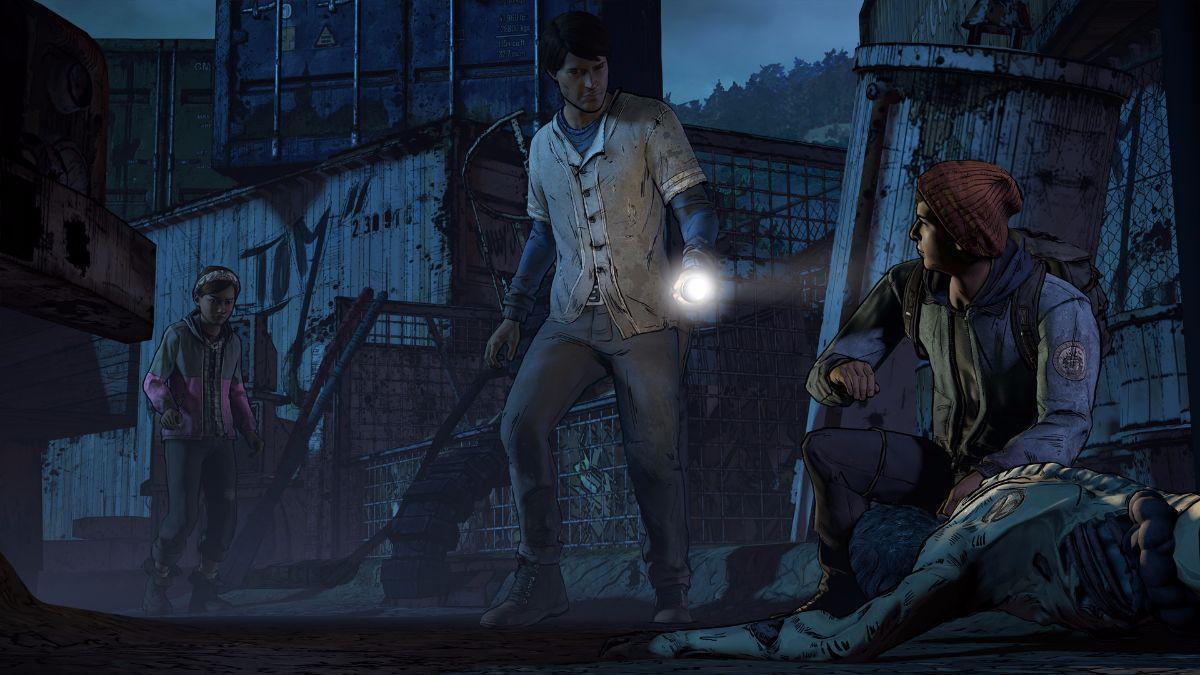 From the opening cutscene, you see that Javier isn’t a hero, he’s just a regular guy who’s had a lot of bad things thrown his way. And that was before the zombies came. We open on his father dying, and his family reacting to it, as well as to Javi not being there when he died. While it may seem like an odd opening, things quickly get dark once the dead father comes back to life. It’s here things get right into the groove of Walking Dead, and next thing you know, Javier, his sister-in-law Kate, his nephew Gabe, and his niece Mariana, are all trying to survive.

What makes the first two episodes really interesting to me, is just how much focus is put on not only on Javi, but the people he meets along the way. The story is rich with characters, and TellTale isn’t afraid to show them off. Furthermore, much like Mass Effect or various other RPG’s, you can tailor the storyline to however you’re feeling at the time. So if you think Javier should be nice in a situation, you can steer it that way. You angry? Have him shout out something. Even silence is an option as things break down. And while I won’t say that every discussion is vital, the game does let you know when a choice or line you make or do has an impact on a character. This happens sometimes in very small spaces, which can at times make every conversation count.

The story picks up quickly as the need for supplies runs you into a group of people you find out are called The New Frontier. A group that believes in “justice” as much as survival. However, this group is very radical, and causes problems for Javi and the others he meets multiple times. However, as in all good evil groups, not all are radicals, and it’s shown just how much of a divide there is at times. 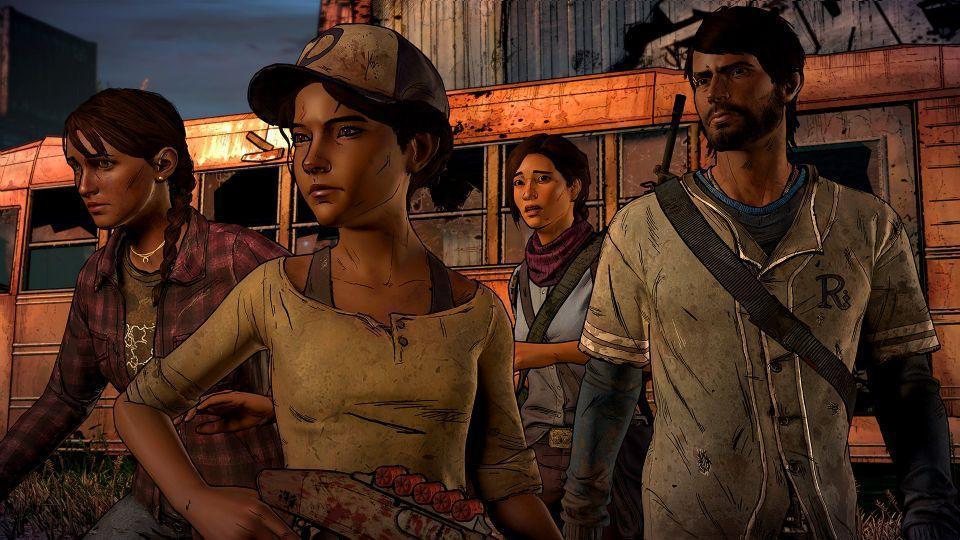 To me, that’s the beauty of the world of Walking Dead. Yes, there’s zombies everywhere, but the real threats at times are humans. What happens when the world ends, supplies are low, and everyone wants to survive? Often, we go into base instincts, we get greedy, we want to protect our own. Yes, sometimes we rise above and make something better, but just because you’re that way, doesn’t mean others are. We see that dichotomy a lot in The New Frontier. As not only does Javier have to make some very brutal choices, and by he I mean us the player, but we see just how dark the world has gotten, and how it affects people. For even simple things like anger, or bitterness, can change a persons attitude in a second.

Which of course brings me to the brutality and grimness of the The New Frontier. Walking Dead is well known for its violent twists and turns. If you don’t believe me, just look at the season 07 opening of the TV show. But for the game, they could’ve easily glided through with only minor struggles and obstacles. Instead, they paint a very real picture of what could happen if you were stuck in a zombie filled world with a lot of angry humans. A key death at the end of the first episode is very poignant, as well as an accidental death that happens because a character couldn’t control their temper. It was shocking, and yet believable. That’s of course not even talking about the twist at the end of the second episode, which is sure to get people anxious for episode 3.

For those who are wondering about Clementine, don’t worry, she arrives early on, and she gets her own little sections to play through. While I’m new to her technically, I have read about what’s happened to her in previous games, and she acts just like you’d expect of a girl who’s gone through what she has. Don’t think though that she has no new stories to tell, as a key twist plays upon what has happened between seasons of the game. 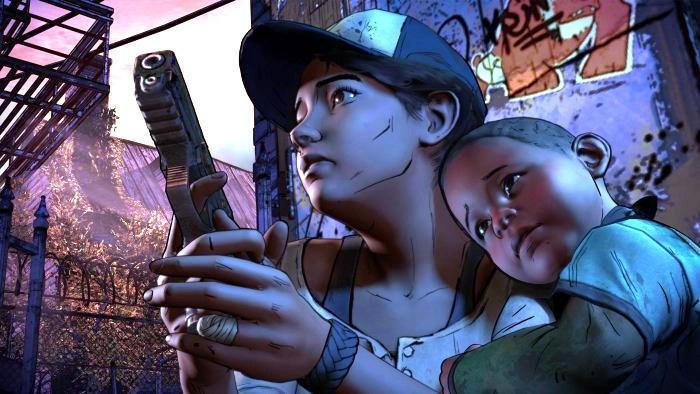 Fans of The Walking Dead comic and show are sure to smile in episode 02, as a classic character makes his debut. What his role is remains to be seen, but it is indeed a fun inclusion.

Now, this game is more of a visual novel. With only small segments of gameplay, and even when those come, it’s either a quick time event, or a point and click adventure. For those who are wanting a more visceral, or hands-on game, this may not be for you.Also, while I do love the characters, some of them act really weird at times. They’ll saw there’s only one way to get something done, even though a scene earlier it was proven that wasn’t true. So why the reversion? Also, some characters come on a bit too strong at times, and it leads to some eye-rolling dialogue choices. Also, as in real TV episodes, the content is short. I beat both episodes in about 2 and a half hours maybe.

Visually, the game is very stylized, and I think it works here. I only had a few visual hiccups, and I honestly think that was my computers fault instead of the games.

Overall, Walking Dead Season 03: The New Frontier, starts the season off strong. If you’re new to the franchise, this is the perfect time to jump in, as the first two episodes are available now for purchase. I recommend trying it out if you’ve gotten some spare time.

The Flashback Interview: Katie Leigh Surprise — There’s About To Be A Double Dragon IV

The Nintendo Store Has Been Smashed By Xenoblade 3 Demand