Before we start it should be noted that Vigilantes is a Steam Early Access game, we are reviewing it base don the merits of the game itself and not as a finished product as of yet.

Vigilantes is a clear callback to some of the games of the 90’s, specifically XCOM and the original Fallout. If you aren’t a fan of those games you might not like it. It also plays up the narrative style of the old-school Noir stories of yesterday, while mixing it with a futuristic tone of sorts. What this results in is a rough yet adequate RPG.

You play as Sam Contino a man who is “never going to go on that ski trip” after he walks in on a mugging and decides to do something about it. This leads to him going from a simple life to one of a vigilante, one that he seems pretty easy to go down into. Along the path to you freeing your city from several gangs you’ll get allies, get the chance to craft items to help you on your way, and slowly improve until you’re the vigilante that this city needs.

There are several things that tip off that Vigilantes is still not fully done yet. The first is that the game is a pretty steep learning curve. There are big and small text boxes that have to tell you oodles of information, And while this is nice in a sense, you can’t help but wonder how much better it would’ve been if the game just walked you through the motions the first time instead of just dropping it all on your lap.

This only gets hammered home with the opening “cutscene” is several minutes long, and features a very chatty narrator who doesn’t seem to want to stop talking. This happens even more when new characters are introduced and we get “scenes” with them that are nothing more than still images with voiceovers on them. It gets pretty annoying after a while, and there’s no way to skip them. 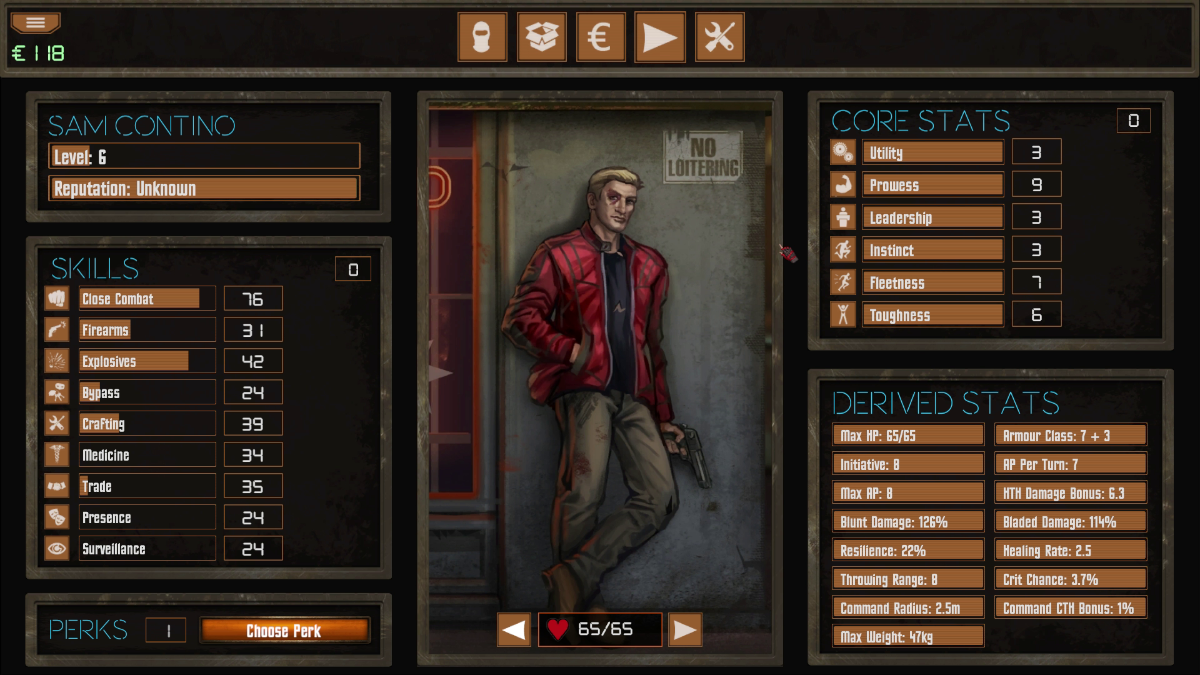 As for the combat, the game takes a very XCOM approach to things, you have so much you can do in a turn, every action takes up Action Points, and you need to play strategically else you’ll get killed. Or, your partners will get killed. I will give Vigilantes credit, they put a lot of depth into their gameplay. You have options as to whether you want to fight bare-handed, with a melee weapon, or with a gun, you can switch on the fly (but it drains AP), and the more you use said weapon the better you’ll get at it.

However, at times it seems as though the combat just isn’t in your favor. Despite having high stats, it felt as though I missed more than I hit. Also, because everything drains your AP, it really limits your actions in key situations. Once you build up a team you do have more options, but that also gives you more ways to lose.

The other thing that’s interesting about Vigilantes is the Home Base feature. Here you can rest, heal, swap out inventory, start to build up your crew, and more. But again, it’s not explained beyond “Press buttons to see what happens”. For such a key feature, it doesn’t get the attention it deserves.

As you progress, the enemies you face will grow, and grow more powerful. The game does adapt to your skills and techniques, adding even more strategy and difficulty to the title. If you’re not careful, the game will overwhelm you, or the city may turn against you because of what you do. Your choices on whether to let people live or die will be a factor.

In the end, Vigilantes is a competent RPG that may intrigue you, or it may not, it just depends on how you like this style of games. It’s on Steam Early Access now if you want to try it out.