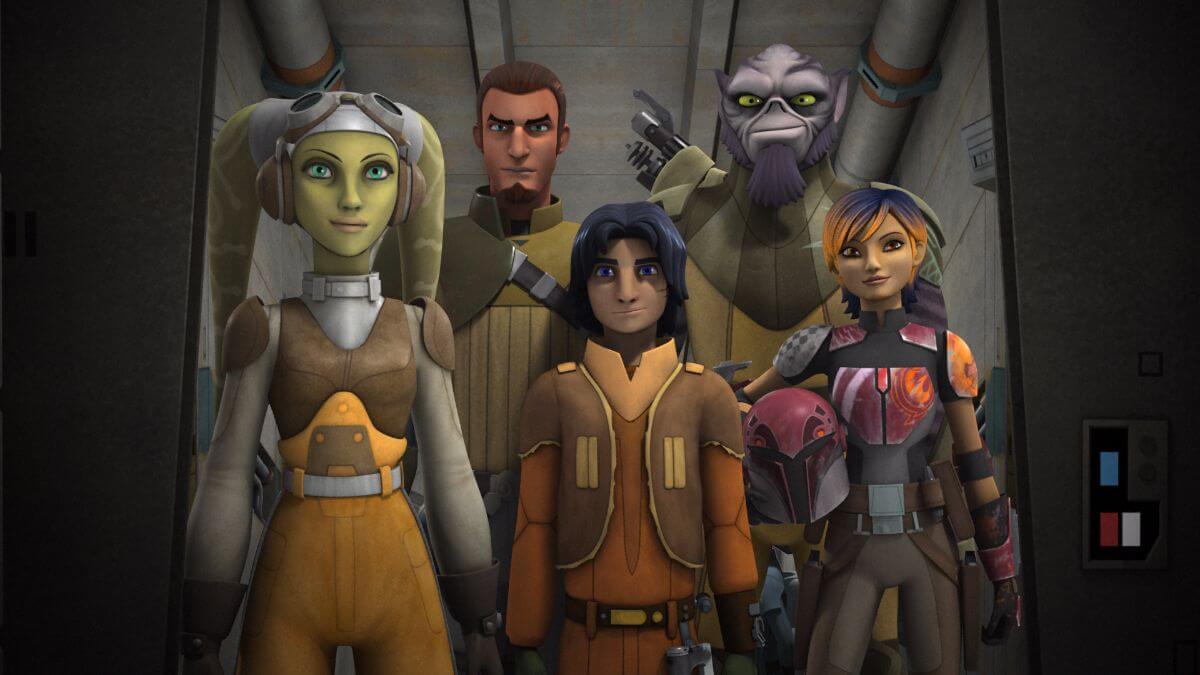 The crew of the spaceship Ghost is back for another season with Star Wars Rebels. At this year’s Star Wars Celebration 2015 convention, Lucasfilm and Disney XD screened the upcoming season two premiere movie event, “The Siege of Lothal.” Without a doubt, the premiere of season two for the hit animated series kicks things off with a bang. “The Siege of Lothal” is a two-part story, and executive producers Dave Filoni and Simon Kinberg were on hand to introduce the episodes. The season one finale, “Fire Across the Galaxy,” was shown first to gear fans up as an appetizing palette cleanser.

Season 2 picks up shortly after the events of “Fire Across the Galaxy.” The gang of the Ghost has joined forces with the Rebel Alliance to fight back against the Empire. However, while Hera wants to fully put the Ghost crew’s support behind the Rebellion, Kanan is not so keen on joining the effort full-time. It seems Kanan would rather the Ghost stay independent rather than joining a military effort, having had enough of war after the tragic end to the Clone Wars years earlier. Unfortunately, Darth Vader has come to Lothal, and the Dark Lord of the Sith has some nefarious designs in mind for the intrepid heroes. Vader hatches a plan to smoke out the Ghost crew and eliminate the remaining Jedi once and for all.

Personally, I was never a big fan or regular viewer of Star Wars: The Clone Wars. It is not that I thought it was a bad show, but I was never that invested in the events of the show since it was so deeply rooted in the flawed and disappointing Star Wars Prequel Trilogy. Plus, it never really felt like Star Wars to me. Unlike The Clone Wars, Rebels actually feels like classic Star Wars. Rebels has brought the material back to a classic, nostalgic flavor that brings the story more in line with what Star Wars should be. It has a more adventurous, swash-buckling tone. The music sounds more like the original Star Wars. It even looks more like Star Wars with the classic Stormtroopers, Tie Fighters, Grand Moff Tarkin and now Darth Vader. The main characters are a ragtag, motley crew of rebel outlaws fighting against an evil Empire. That is more classically Star Wars than The Clone Wars ever was. I always found the presentation of the clone trooper characters in The Clone Wars contrived and convoluted. Not to mention, many stories only underscored how flawed the storytelling and writing was for the prequels. I simply want to spend more time with the likes of Ezra Bridger, Zeb Orrelios, Kanan Jarrus, Hera Syndulla, Sabine Wren and Chopper. They are a far more compelling group. In addition, they are all underdogs in their own way, which makes the characters very easy to relate to and root for. Season 2 brings Darth Vader into the fold as a main villain and a force to be reckoned with. It is utterly fantastic to have James Earl Jones back in the saddle to voice the character. I was skeptical about how involved Jones would be with the show, even though he had a cameo scene in the premiere for the first season. Jones is in his 80s, and he had not exactly shown an outspoken interest to play the character again over the last 10 years, since Revenge of the Sith. Honestly, even though Filoni and Kinberg stated that Jones will voice Vader for every appearance of the character in Season 2, I am still not convinced that will happen very much. Regardless, it is great to hear the iconic pipes of Jones give voice to Vader and actually getting to play with Vader as the most cunning, evil and formidable force in the galaxy. There is not a hint of the nonsense from the birth of Vader from Revenge of the Sith. Vader’s active involvement with the story certainly raises the stakes. Considering Rebels is set several years before the events of Star Wars: A New Hope, it makes one suspect that there is no happy ending at the end of this story for Kanan, Ezra and Ahsoka. I do not see how they all get out of this show alive and unscathed without a contrived outcome.

Are there threads going back to Clone Wars? Yes–especially with Ahsoka Tano, who is a high-ranking member of the Rebellion. The premiere does pay homage to Tano and her connection with Darth Vader, which I am sure fans will appreciate. The implications are quite ominous and equally intriguing.

While I am personally not a big fan of the art design and character model style for the show, the action sequences are top notch. The premiere featured a thrilling duel between Vader, Kanan and Ezra. This fight sequence was a more meat and potatoes choreographed sequence rather than the over-the-top, sloppy, flippy duels in the prequels. It is later followed by another amazing action sequence where Vader attacks a Rebel squadron with nothing but his own Tie Fighter. In this series, Vader is simply fried gold dynamite. I hope he is not put to the sidelines until the end of the season. I can understand the desire to use him sparingly; but hopefully more appearances like this will happen down the line.

With “The Siege of Lothal,” the stage has been set for Season 2. The conditions for the Ghost crew have changed; and the Rebel Alliance, while brave and courageous, is still horrendously outmatched and outgunned by the Empire. With the Empire increasing its grip on Lothal, the Rebel Alliance has its work cut out for itself this season. Plus, one senses that Kanan is getting restless and reluctant to fully join the cause of the Rebel Alliance–a conflict that will likely come to a head later on this season.

Star Wars Rebels Season 2 will return with a special premiere movie event this summer. Season 2 will officially debut on Disney XD later in the fall.

The BFG: See It Before It’s Out Of Theaters

The World Has Lost The Original Chewbacca