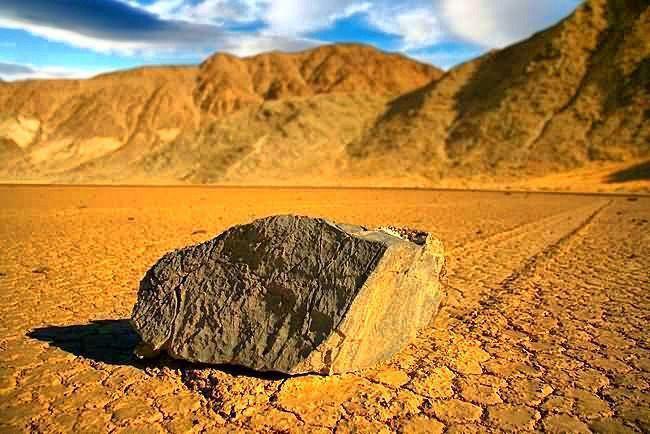 A famous unsolved mystery has just been solved.  Who or what was moving rocks across Death Valley? Was it ghosts? Aliens? Bigfoot in an especially absurdist mood?

Nah, it was ice and wind. Science bursts another “paranormal” bubble.

The “Sailing Stones” of Death Valley’s Racetrack Playa have been a puzzle for decades. The rocks  leave trails behind them in the dirt that makes it clear they are being dragged or moving on their own, even though some weigh hundreds of pounds.

Both scientific and supernatural explanations have been suggested, but it looks like a team Scripps Institution of Oceanography, UC San Diego led by paleobiologist Richard Norris are the first to directly observe the movement in action and figure out why it happens.

The team set up a weather station at the site and equipped 15 rocks with motion-activated GPS units in 2011. And then they waited. For two years.

In December of 2013, Norris and his cousin, co-author of the study Jim Norris, inspected the site to find that the playa had a three inch layer of ice on it. And then they saw the rocks moving, as documented in the video above.

“Science sometimes has an element of luck,” Richard Norris said. “We expected to wait five or ten years without anything moving, but only two years into the project, we just happened to be there at the right time to see it happen in person.”

The reason the movement is so rare is because it takes an unusual combination of elements. The playa must fill with just the right amount of water, which must freeze overnight to just the right “windowpane” thickness. Then when the ice layer starts to melt and crack in the sun the next day it  breaks apart into panels. The panels are pushed around the playa by winds, in the process shoving rocks about and making trails in the mud. The panels sometimes make trails of their own as well, which the park service had chalked up to tourists stealing rocks.

For lovers of mystery, however, Norris only saw the smaller rocks move. There’s still a question of whether the mechanism is the same for larger rocks.

“We documented five movement events in the two and a half months the pond existed and some involved hundreds of rocks”, said Richard Norris, “So we have seen that even in Death Valley, famous for its heat, floating ice is a powerful force in rock motion. But we have not seen the really big boys move out there….Does that work the same way?”

Image by Salazax from the Sailing Stones Tumblr