We know there are a lot of originals coming within the first year of WB’s expensive streaming venture DC Universe. But how soon will we get them?

WB provided an answer today when they released this graphic detailing their tentative plans to roll out DC Universe originals over the next year. The strange thing about it is, it already gets something wrong…. 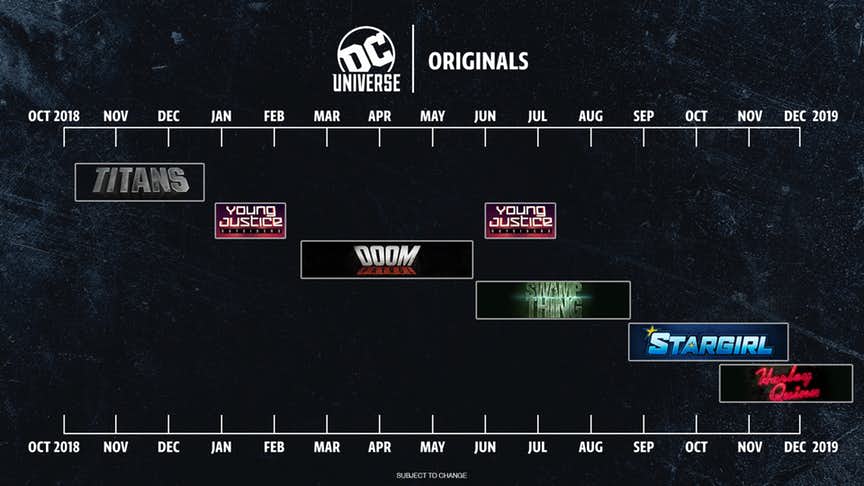 Shortly before this graphic was released, Brendan Fraser said during a press event that Doom Patrol was due out on December 12. According to this, the show doesn’t premiere until mid-February. Who is right — Fraser, or the people who made this graph? We can’t tell just yet — hopefully an official statement is on the way.

Assuming the rest of it is correct, it’s kind of a letdown. Some of DC’s most interesting projects won’t be on the servers for months. Season 3 of Young Justice has been split in two — and to be fair, Cartoon Network would split the show’s seasons in two when it aired them — but it’s still kinda lame to see.

Then there’s Harley Quinn, aaaaaallllll the way at the end of the graph. It’s quit a letdown to be treated with such a great teaser and then be told the show won’t appear for an entire year. We don’t even know if DC Universe will survive that long. (It’s technically active right now…how many people do you know with a subscription?)

The fine print on this graphic says “Subect to Change,” and something has already changed, so we can hope for better scheduling in 2019.