Headlander is exactly the type of game that you would expect Double Fine Productions, the Tim Schafer company that has been responsible for the likes of Psychonauts and Brutal legend, to make. The only real difference between it and some of their other output is that they have squarely prioritized gameplay over everything else, meaning that the story and action isn’t quite as in-depth or funny as you might expect, but boy is it really fun.

The game takes place in an unspecified futuristic setting that is very much inspired by the likes of Logan’s Run. Technology has advanced to the stage that humans are now able to upload their consciousness to a cloud storage system where they can effectively take over the bodies of robots to carry out any physical tasks. Unfortunately, an authoritarian AI known as Methusaleh has been causing a stir and it is up to you to relieve the rogue AI from power.

Having awoken as just a floating head with no idea of who you are and what you have to do, Headlander has plenty of breadth for storytelling to explain the events. However, it immediately becomes clear that the focus is one the main gameplay mechanism – an ability to take control of any robot and use its abilities. This special power expands upon the idea of Metroidvania where you collect power-ups and skills, essentially allowing you to experiment with how to overcome an obstacle quickly and easily. 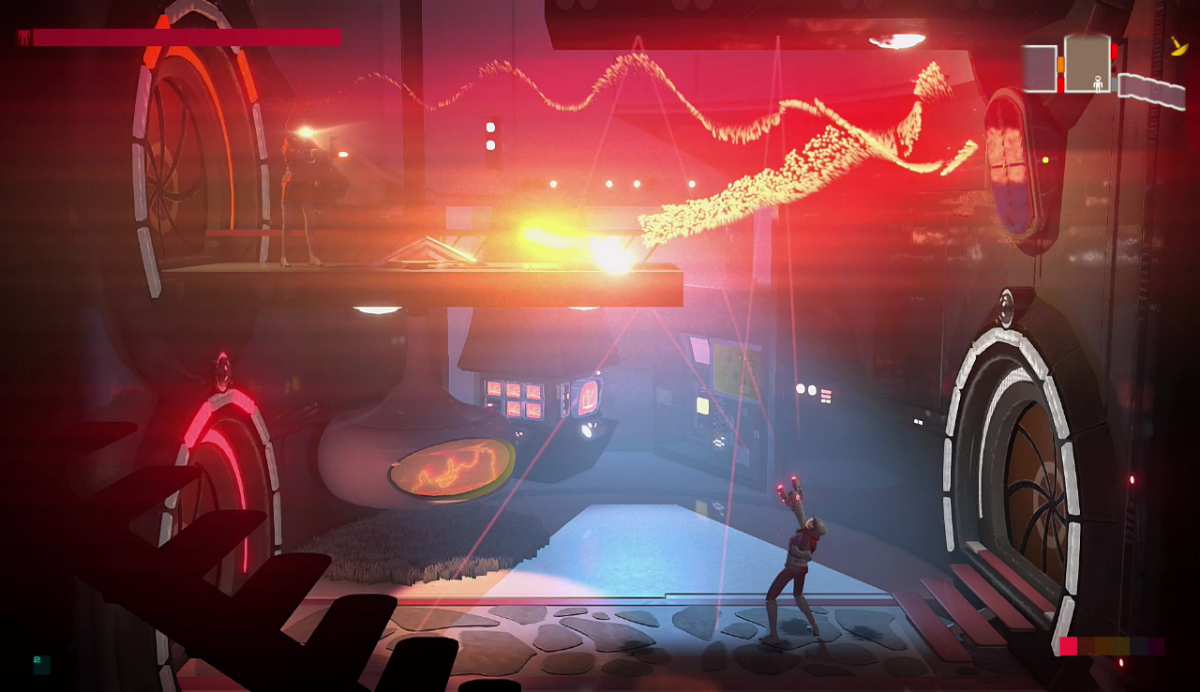 This is also where the main gameplay hook comes into play. The vast majority of your time will be spent trying to make your way through the security measures put in place by the antagonist. Here, Headlander becomes a puzzle-platformer where you have to carefully choose which robots can pass through each specific part of the level. Some have certain security clearances that an open doors, while others are able to withstand an electric shock so that they can walk on a powered floor.

The game is far from just being a puzzle-solving exercise, though. There is also a great deal of exploration and combat. The developers have also put their own distinct twist on both of these elements as well. Exploring is done without the use of a jump button, instead, you simply float around as the disembodied head, traversing to new areas before once again taking over a robotic form. It’s an interesting change of pace from the usual fast-paced run-and-gun gameplay seen in most Metroid-style games and it works very well.

Meanwhile, the combat is equally distinct from most other titles of this genre. In fact quite a lot of the action has been slowed down so that you can take a more measured approach to combat rather than simply having to rely on quick reflexes. Different robots have their own weapons and weaknesses and it is possible to switch to a different mechanical suit during fighting, making each encounter more tactical than you might be used to. Combined with a well-worked cover system, the combat is some of the best to arrive on the Xbox One in recent times. 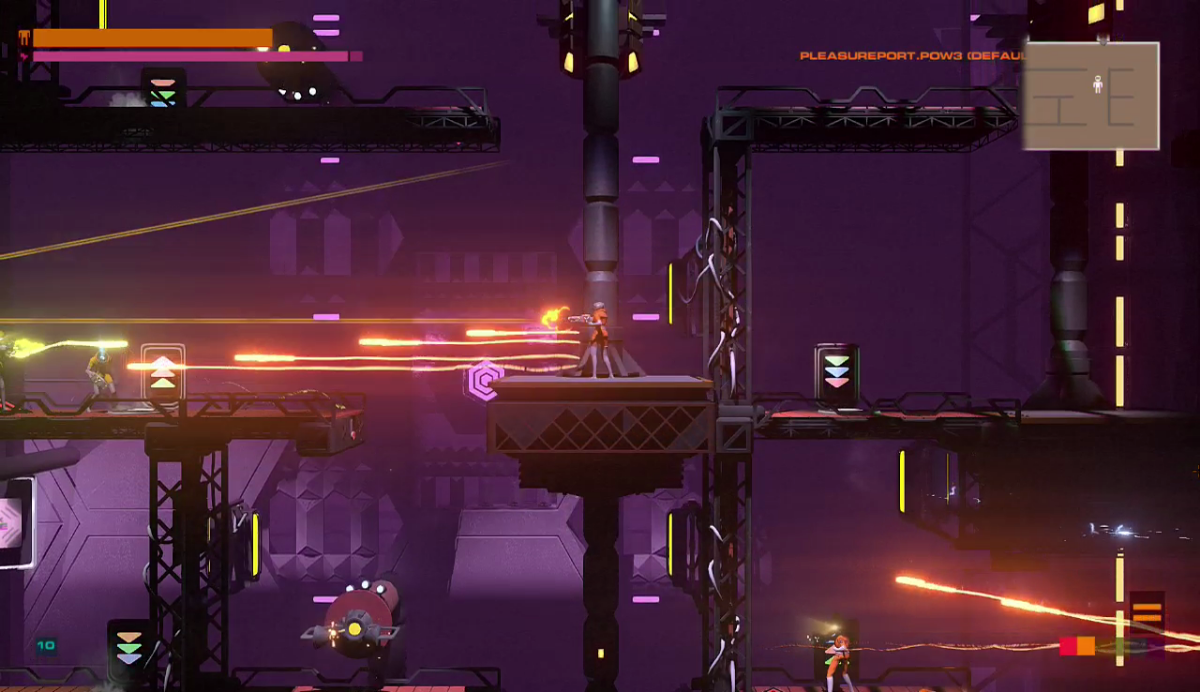 Equally as good as the gameplay is the presentation. The art style has been specifically chosen to harken back to the days of 1970s science fiction, providing a dystopian atmosphere and visuals that chime with the themes in Headlander. Each of the different settings feel like they have been crafted immaculately with much care, with the angular shiny surfaces giving the environments a vintage feel.

The only major gripe is the fact that Double Fine have done very little to let players get to grips with the game. There is very little in the way of tutorials, meaning you have to learn how to use all of the various skills and abilities through trial and error. A lack of explanation also means it is possible to arrive at some frustrating moments that require you to go back and level up certain upgrades before being able to progress. 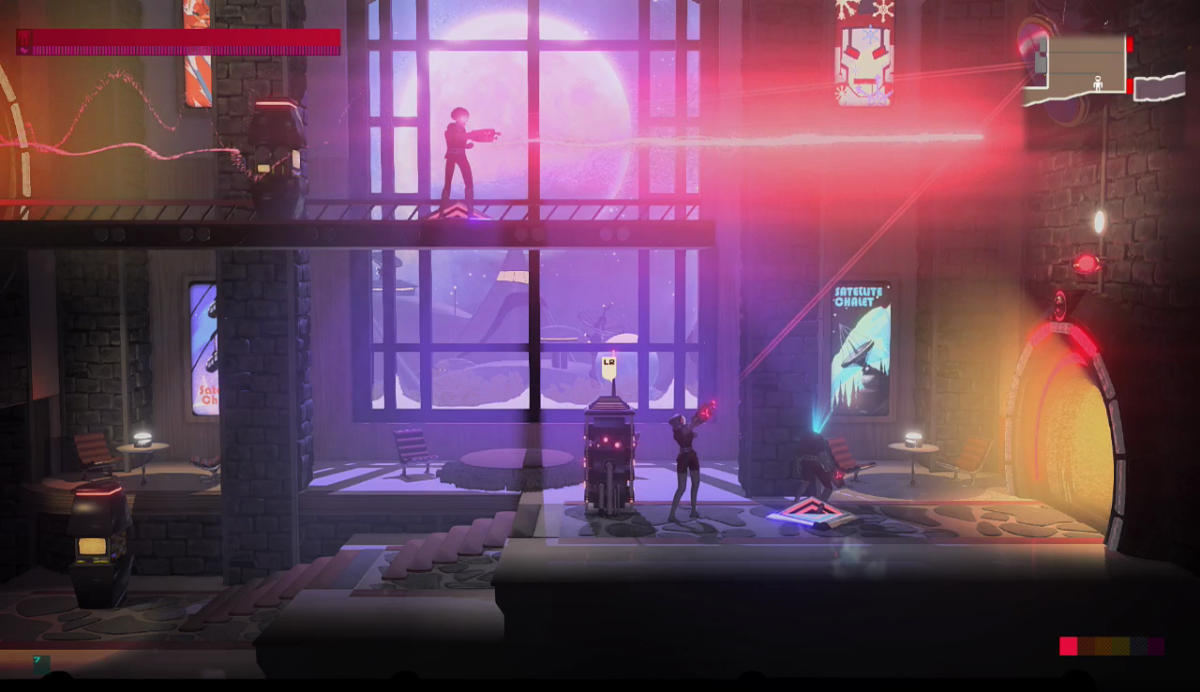 The most important thing about Headlander, though, is the fact that it is hyper-focused on the things it does well. It doesn’t include any extra gameplay mechanics or gimmicks that it does not require. This gives the entire experience a feeling of being one tight package that excels in all of the important areas. While the Metroidvania genre has seen plenty of new entries over the past few years and the sci-fi setting is popular amongst developers, it does enough to be distinct thanks to its unique gameplay mechanics and novel ideas.

This review is based on a digital copy of the game on the Xbox One that was provided by the publisher for review purposes. It is currently available on the console worldwide priced at $19.99.

The Persona Games Are Coming To XBox