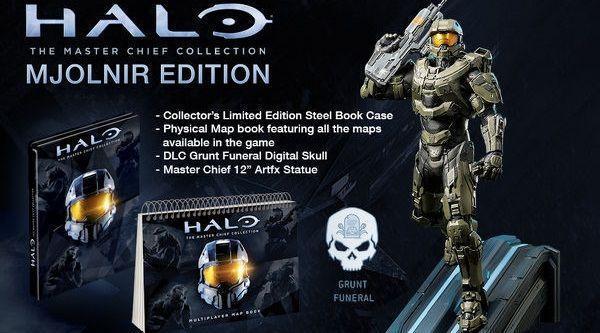 In a surprise move GAME, the UK retailer that specialises in all things gaming, has revealed that Halo: The Master Chief Collection is getting a rather snazzy special edition. While Microsoft has yet to officially comment on the package, the fact that it is listed on GAME’s website and is available to pre-order suggests that this is the real deal.

The Mjolnir Edition comes armed with a 12” Master Chief statue, with swappable arms allowing you to change the stance of the series’ protagonist. Also included in the collection is a steel book case for the game, a physical map book that contains images of every map featured in the title and the DLC Grunt Funeral Skull. It’s unknown what effect the skull will have in-game, but going on past examples in the series it’s likely to involve something hilarious happening to Grunts.

Unfortunately, the price for the Mjolnir Edition version of the game clocks in at £169.99, roughly half the price of an Xbox One console. If you don’t want to push the boat out that much you can always choose to go with the Limited Edition version. This includes all the goodies listed above with the exception of the 12” statue.

Both special versions of Halo: The Master Chief Collection are exclusive to GAME. There has not been any word on whether other regions will also get these editions, though it is likely that it won’t be available only in the UK.

Halo: The Master Chief Collection was first announced during E3 back in June. It includes HD remakes of both Halo: CE and Halo 2 along with upgraded graphics for Halo 3 and 4 as well as the multiplayer components from each game in their original form.  The title is set to run at full 1080p and feature 60fps. Buying the game will also grant users access to the Halo 5 beta that is set to launch in 2015. The collection will be available from November 11.