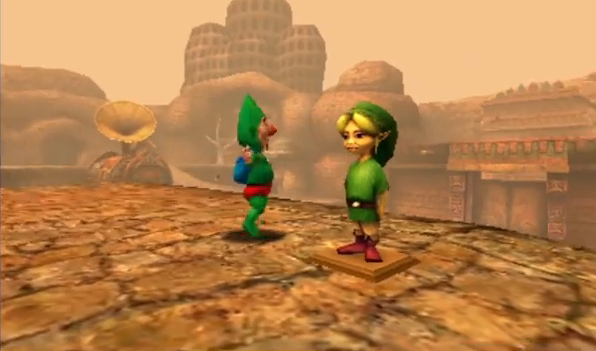 A brand-new Iwata Asks has been published on Nintendo’s website. For those who don’t follow them, Iwata Asks is a series of roundtable interviews discussing the development of a recently-released Nintendo title, moderated by Nintendo’s president himself, Satoru Iwata. The new Iwata Asks is all about Majora’s Mask 3D, and here are five revelations discovered in the interview that no one knew before:

When development on Majora’s Mask began in 1999, the original plan was for the events to take place over one week. But as they worked toward that goal, they found that keeping track of every detail and event that happened over seven days was too much, even with the Bomber’s Notebook, so it was condensed into three days. None of the planned events were lost, and this is why the game’s timeline is so packed.

While deep in development of the original game, an exhausted Eiji Aonuma (the director) had a dream one night where he was being attacked by hundreds of Deku Scrubs. (He actually woke up screaming.) You might assume this was the inspiration for the opening cinema, but the truth is far stranger: Aonuma went to work the next day and found the cutscene completed and awaiting his approval. He freaked out and demanded of the programmer, “How did you find out about my dream??”

In preparation for the remake, Nintendo guru Shigeru Miyamoto thought it might be a good idea for Aonuma to replay the original Nintendo 64 game and decide if there was anything he would prefer to change. As any artist will tell you, it can often be painful to look back at old creations years later and see all the mistakes you wouldn’t have made in the present day. This was what Aonuma went through, and had the reaction “What in the WORLD??” so often that he made a long document of changes he wanted to make in the game, and called it the “What in the World List.” It’s because of this list that all the boss fights are different and some masks are in alternate places.

TWO HANDHELD ZELDAS WERE CREATED AT ONCE

Aonuma was originally tapped to be the director of A Link Between Worlds, but he was already working on the Majora’s Mask remake at the same time, and had to hand the new game off to a different man. (Must’ve turned out all right in the end.) It’s because of this that they were able to apply lessons learned from the development of Link Between Worlds into the development of Majora’s Mask. The game was also delayed in order to add compatibility with the C-Stick of the New 3DS.

“Se-sa-me SAAAUCE” are the official lyrics to the fanfare Link gets whenever he opens a chest or solves a puzzle. Or, at least, that’s what the team sings to themselves whenever it happens.