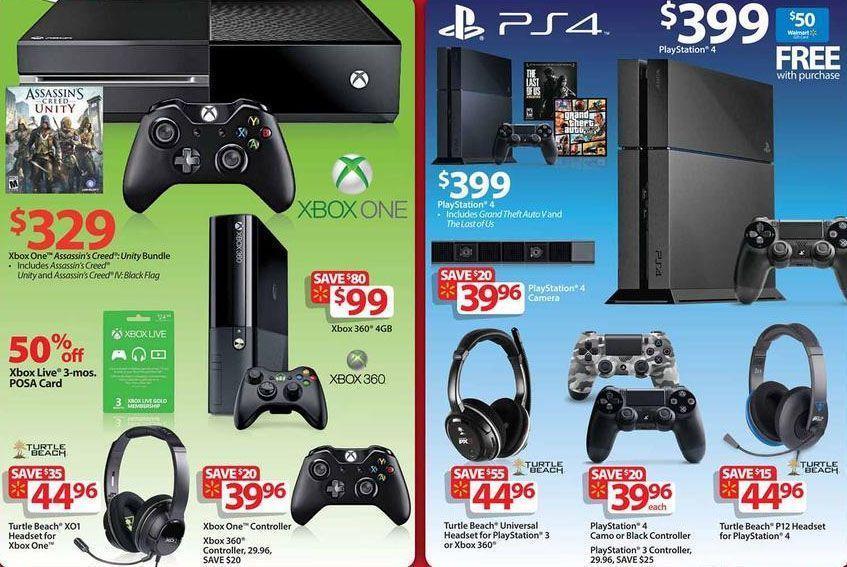 If you own a suit of armor, have a black belt in martial arts, or just don’t care about desecrating a sacred American tradition with pure greed, the barbaric annual event known as Black Friday may be for you. Advertisements and circulars from all the major big boxes are just beginning to be purposely leaked, and here are a few of today’s newly-announced deals you can look forward to seeing in the video game department…..

Wal-Mart has now leaked their 40-page Black Friday flyer and here is what you can score:

$50 for Call of Duty: Advanced Warfare on current-gen systems

$40 for Call of Duty: Advanced Warfare on last-gen systems

$37 for Skylanders and Disney Infinity humungo-boxes

$20 for current-gen Titanfall (wow), last-gen Black Flag, Borderlands 2/Dishonored (packaged together), The Last Of Us and more

$15 for Frozen: Olaf’s Quest (just throwing it out there)

Grand Theft Auto V PS4 bundle with the choice of any two other games, for $449

Microsoft will be offering Black Friday deals directly from its website. Most of the Xbox One bundles available at Wal-Mart will also be offered there for the same price, but without the added bonus of having to wrestle 375-pound Wal-Mart Moms for them. In addition, there will also be these:

A lot of their software for both consoles will also be on sale, but the exact price amount has not been revealed yet.

Part III in this series will materialize when more stores show their cards.