Contra: The Board Game Reports For Duty In 2021

Ahh, the beloved shoot-em-up Contra. Half Rambo, half Aliens, there’s no better test of a gamer’s reflexes than to jump and dodge your way through projectile-crammed corridors while shooting gigantic gruesome bosses. It’s definitely one experience that can’t be served up any other way — or can it?

Blacklist Games and Kess Co have announced they’ve licensed the Contra brand from Konami and are using it to create the world’s first Contra board game. The gameplay mechanics have us curious….how, exactly, do you translate something like this into a tabletop experience?

The game is a co-op for one to four players. After the proverbial power button is switched on, participants pick from four characters: Bill Rizer, Lance Bean, Lucia LCR-0, and Sweets Manson. Each has their own individual deck of cards that contain offensive and defensive moves. More attack moves can be procured, but only after an enemy on the board is defeated. When the enemy attacks, players rely on something called the Advantage System to increase their odds of dodging…because, just like on the NES, they will die in one hit.

So how does Contra: The Board Game keep the famous fast pace of Contra: The Video Game? Like this….a timer is cranked up, and you all have a limited number of minutes to defeat the boss character. The box comes with several environment boards, eight figures, four Commando decks, four Enemy decks, five Hero dice blocks, five Enemy dice blocks, four Stage decks and 20 objective cards. 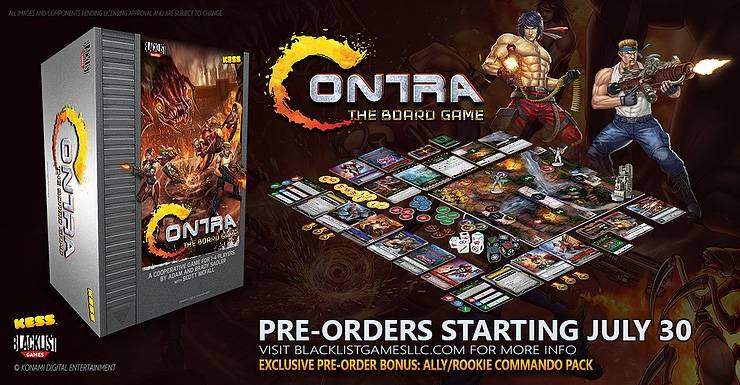 It isn’t the first video game series to be adapted into a board game, not by a long shot, but it’s certainly ambitious in what it tries to pull off. Preorders for Contra: The Board Game will open July 30, and the game will start shipping in 2021.