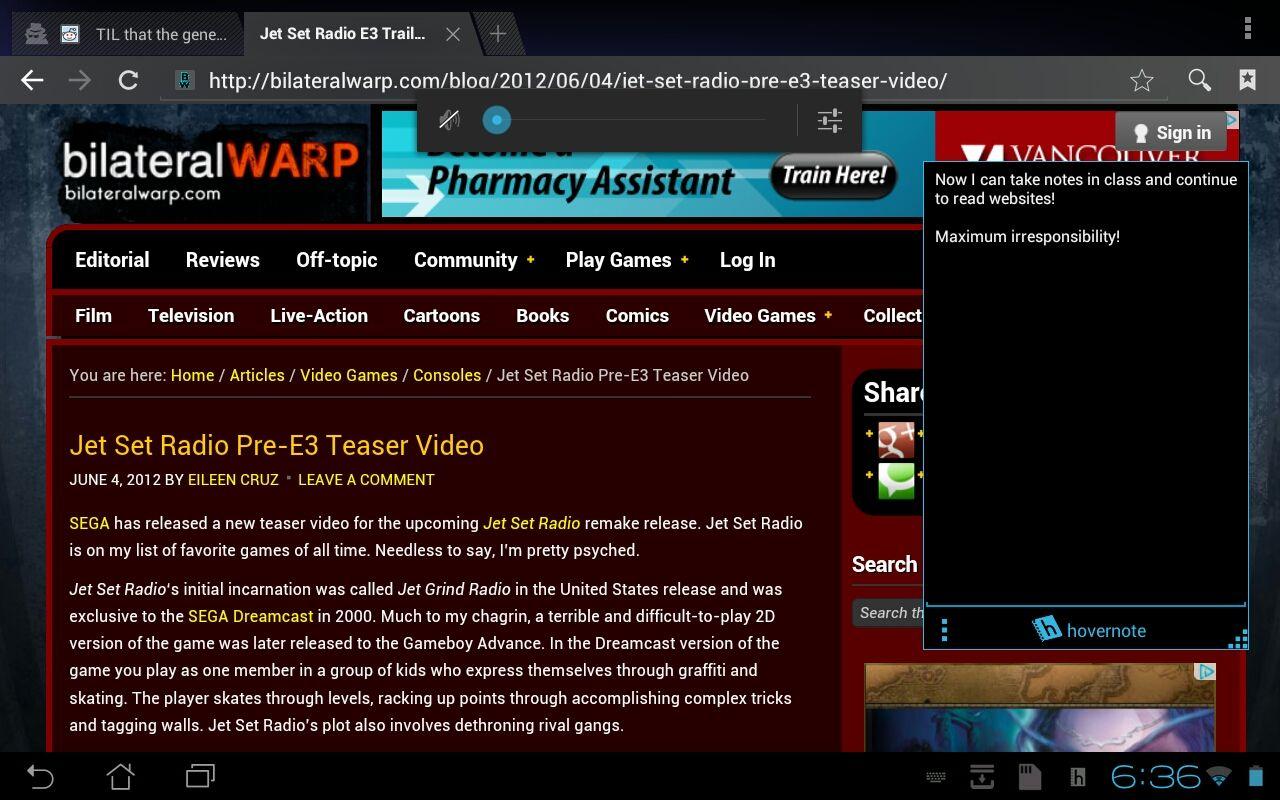 Most mobile operating systems and even desktop operating systems are gradually moving away from the windowed model. Yet, constantly bobbing between applications doesn’t really fit every scenario, especially with the screen real estate of tablets. However, it’s possible to have floating apps that could sit on top whatever full screen work you’re doing, though not officially supported by Google. Thus, floating calculators, web browsers and even a video player have been cooked up, but there was no simple notepad application. Given the tablet’s rise in educational settings, and Android’s popularity with the more computer oriented, that felt like quite an omission. Not being able to take notes about an e-book without bouncing to another full screen app feels weird.

However, it seems that call has been answered in the elegantly simple HoverNote by developer Mike J. Lim. Full disclosure: Mike’s a friend of mine, and yes this is not a free app. However, after seeing this application in action, I actually bought it off Google Play myself, and I liked it enough to write up. If it sucked, I wouldn’t talk about it. It’s not even everything I’d want, but I’ll get into those details later.

HoverNote‘s pluses are obvious. Whether you’re reading a e-book, playing a game or browsing the net, you can jot down notes about whatever content you’re enjoying, or perhaps more useful to some, notes about something else. For students who have to bounce between reading facebook and taking lecture notes, this is app is unbelievably welcome. Yes, that’s not as good as actually paying attention, but it’s a much cleaner work flow jumping between fullscreen tasks. It’s probably something that shouldn’t have to be lauded, as anyone on an actual laptop doesn’t have to make that choice, but as the line between tablet and laptop blends thanks to devices like the Asus Transformer, apps that let existing and entirely reasonable workflow choices flourish are welcome. Better still, HoverNote locks into the existing sharing options in Android. Start a note in HoverNote, and kick it over to whatever service you prefer: GMail, Evernote, Google Drive and anything else that shows up in your Android sharing menu all work with the app. In that sense, it’s an even slicker experience than note taking on a desktop OS as you can bump your work to the cloud with out even trying. It also makes a better attempt than any other floating app to keep with the Android 4.0 design style.

As I alluded to earlier though, it’s by no means perfect; it’s definitely got some notable issues. While most apps work exactly as they should, Netflix freaks out and pauses when HoverNote is in the foreground, and its interaction with Super Video, a hovering video app, was a little weird as they wouldn’t trade layer positions. Every other video app I had on the tablet including CrunchyRoll and Ustream worked normally around Hovernote, so Netflix’s odd behavior may be a Netflix issue, but it’s annoying nonetheless. Further still, you’re stuck with the system default colors, font size and non-transparency. Especially in the case of a note-oriented app, it’s annoying to have chunks of screen blocked out sometimes, and it would be very user-friendly to have some configuration on the color palette even if that means breaking with the Android 4.0 color scheme. Additionally, an option to change close behavior of the application would be excellent, as it shouldn’t have to be a two step process of closing a note, then closing it out of the system tray. The one way sharing and lack of ability to save to text file on the tablet itself is a little annoying as well. It’s easy to start an idea in HoverNote, but returning to an idea you’ve shared requires going to whatever application you bumped it to and then copy/pasting that information back into a fresh instance of HoverNote. That’s quite inelegant. Hopefully, future versions of the software offer deeper integration with with services like Google Drive, Evernote and Dropbox as well saving to text files.

As it stands, it’s really the only game in town at the moment for this kind of app, and I have to think we’ll see app developers scrambling to add similar behavior to their note taking and writing apps if they have any sense, lack of official documentation from Google aside. HoverNote easily makes itself worth the 99 cents it costs. If it can redress some of the rougher edges, it might go from worthwhile to steal, especially for Android tablet owners.

Update: As of June 16th, HoverNote has since added close behavior settings, transparency settings and some rough text file opening and saving.

When Chess And Poker Collide, You Get The Challengers CHOKER Cup