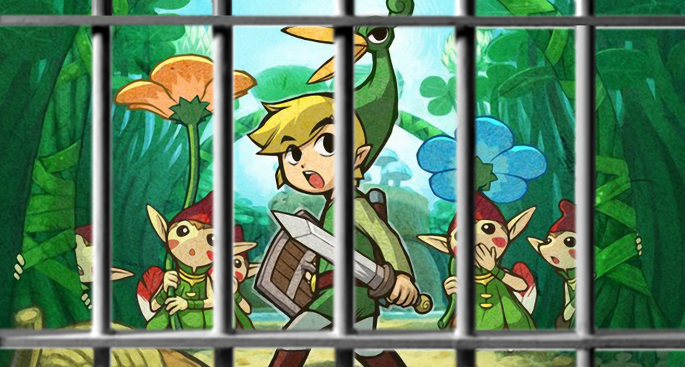 A few years ago, Nintendo debuted its new handheld baby, the Nintendo 3DS. On launch day, the 3DS came out at a price of $250, but then shortly after had a $80 price drop to combat low sales figures. To compensate those who bought it at the original price, Nintendo gave away free “ambassador” Virtual Console games, half of which were from the Game Boy Advance. They also said that these GBA games would be ambassador exclusives, and thus would not come to the eShop. Ever. As in “no Mother 3 for the West” ever.

One of those games was The Legend of Zelda: The Minish Cap, a main series Zelda game (and if you’re into timelining, the second earliest of all). From what I remember of the original launch, it was pretty popular. It also gave us Vaati’s backstory, showing us that the nasty monster first seen in The Legend of Zelda: Four Swords used to be human.

Now, one of the perks of the ambassador program was that these games would keep their value by staying exclusive. After all, consumers who bought the 3DS at launch price were pretty angered by the drop, since price drops so soon after launch are unheard of in the gaming industry. The ambassador program became like a ticket presale- early adopters got their own unique benefits, one of which happened to be a Zelda game.

But was it a good decision to give away such a title? Nintendo isn’t doing themselves any favors by keeping The Legend of Zelda: The Minish Cap (and fellow ambassador title Yoshi’s Island: Super Mario Advance 3, to an extent) behind the ambassador wall. The Zelda series may not print as much money as Mario or Pokemon, but it is a well loved franchise. The Legend of Zelda: A Link Between Worlds shows that people ARE willing to play an old school 2D Zelda, and Nintendo could bring in extra cash by riding the retro wave and releasing The Legend of Zelda: The Minish Cap to the masses. The way Nintendo’s profits have been slipping, you’d think someone in the office would jump on every opportunity.

Releasing The Legend of Zelda: The Minish Cap from the ambassador games would be a great chance to introduce new audiences to the Zelda story (not to mention explain a few things about Four Swords), and there could even be a piracy drop as well. It would be a hit to 3DS ambassador members, but they were treated unusually well considering the industry. Nintendo showed good faith by giving away free games, but keeping them exclusive any longer starts to erode away the value they were afforded in the first place. Part of the fun in gaming comes from sharing your experiences and recommending games to other people. Relegating a Zelda title to a “members only” club precludes any such interaction. Because let’s face it, we’re in a digital world now, and no one’s going to dig out the old hardware and hunt down a cartridge.