Schlock horror is a genre you either love to death or dismiss with disgust. The same can often be said about professional wrestling, the line is very clear between die hard marks and disdainful intellectuals. So it’s only fitting that the creative minds behind WrestleMassacre would combine the two forms of high energy entertainment as a tag team that aims to set you up for a jacknife powerbomb of pure ridiculousness. 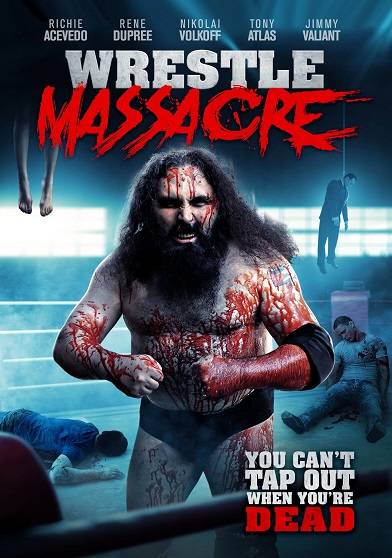 I’m someone that’s very vocal about my fandom for movies on VHS, comic books and vintage action figures, but when it comes to my other lifelong passions of Pro Wrestling and Horror, I must admit I’ve kept those to myself. Maybe it’s the longstanding stigma associated with fans of such “low brow” entertainment or maybe I feel I’m not quite as hardcore as the rest. As it stands I could probably still write a college essay on either topic with enough authority to gain a passing grade.

My favorite wrestlers always had a comedic bent to them, whether it was Rowdy Roddy Piper in the WWF, Ernest “The Cat” Miller in WCW or frankly, the whole goofy cast of Gorgeous Ladies of Wrestling. If a wrestler could make me chuckle between headlocks, they had my allegiance.

The same goes for my horror heroes. Sam Raimi mixed Three Stooges style physical humor with his haunting images, Peter Jackson’s Dead Alive takes gore to hilarious extremes and bonkers slashers like Hello Mary Lou: Prom Night 2 are a blast. So when sitting down to watch WrestleMassacre I was willing to chuckle along if the filmmakers decided take a comedic route and luckily, I was not disappointed. So what’s it about? 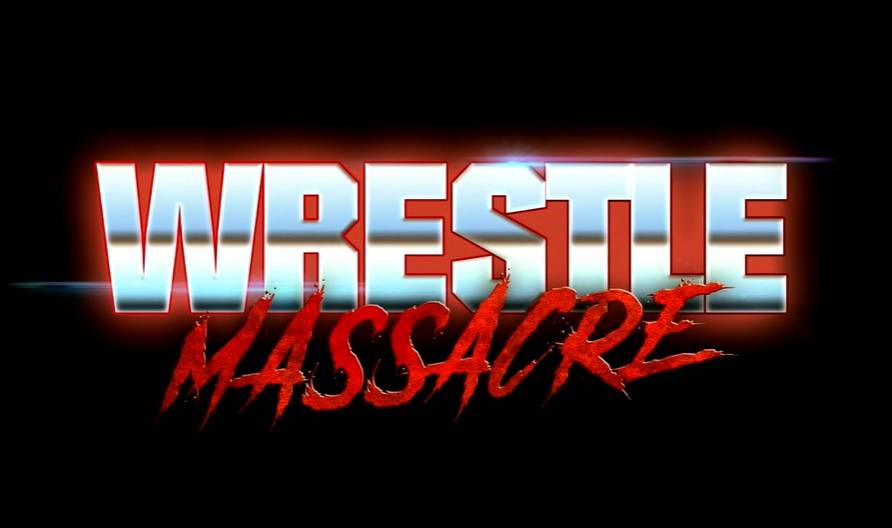 Plot: When an awkward groundskeeper named Randy gets fired from his job, chewed out by his father and humiliated by a wrestling school instructor, he goes on a psychotic rampage using the world as his wrestling ring to get bloody revenge.

Make no mistake, WrestleMassacre is a low-budget film with very little in the way of artistic merit. It’s the kind of film you make in high school over summer break using your funny friends. In this case the cast is made of independent wrestlers and retired wrestling legends who know their way around a microphone to cut a promo, but lack the polish of professional actors. That being said, it’s this grungy, renegade movie making style that gives WrestleMassacre it’s charm.

From frame one we get wrestling boots, blatant nudity and face-ripping gore to create a familiar horror scenario that’s feels like it should feature Jason Voorhees instead of bearded maniac in black trunks. This shocking scene though is more of a promise of things to come as the movie is mostly funny business meant to set up the descent into madness of our main character Randy, played by Richie Acevedo.

Randy is presented as a lonely landscaper with dreams of becoming a pro wrestler like his father, that finds himself being slapped down at every turn by his boss, racist clients and their wives for whom he has a lustful infatuation. Acevedo plays the simple-minded Randy with a lack of charisma that is either great acting or perfect casting. He doesn’t light up the screen by any means, but you definitely feel sympathy for this guy who can’t catch a break. 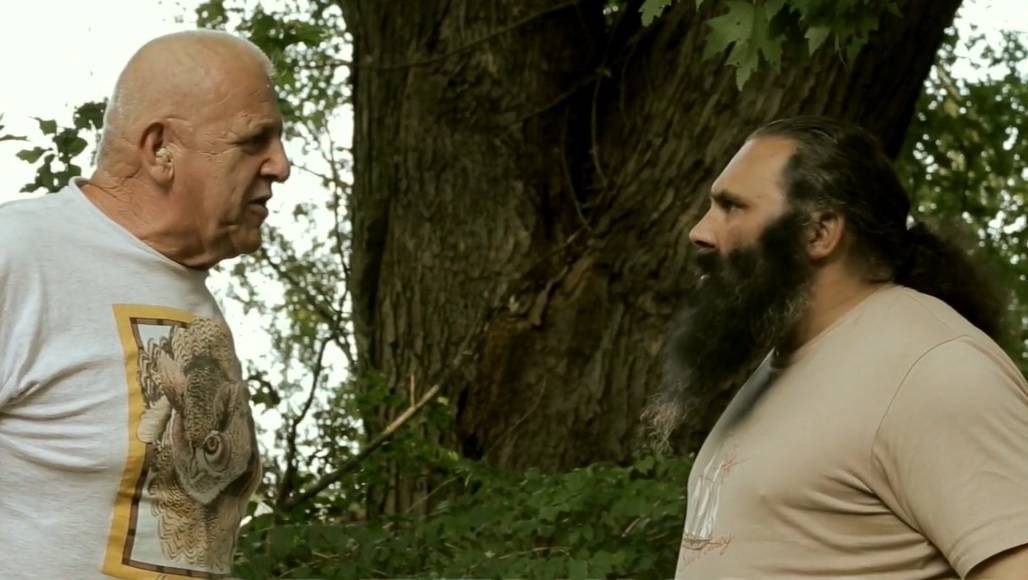 This is especially true when Randy gets cussed out by his bitter, elderly father portrayed by old school WWF Russian heel, Nikolai Volkoff. This stunt casting will surely bring a smile to the face of longtime pro wrestling fans. I had Volkoff’s LJN WWF Wrestling Superstars action figure as a kid in the 80’s! The silliness of a Cuban landscaper being sired by a former resident of the U.S.S.R. is par for the course in WrestleMassacre.

The B-plot involves a jerky Jason Mewes clone named Owen, played by Julio Bana Fernandez, that has gotten himself into trouble with a loan shark named Mr. Valentine that apparently recruits his musclebound enforcers by walking the floor at wrestling fan conventions. While these poorly staged portions feel like an entirely different film, they do function as the main source of comedy in the movie.

For example Owen finds himself being shaken down several times by the loan sharks goons who are led by the psychotic Jackie, played by the hilarious Jimmy Flame. Flame is obviously ad-libbing his dialogue, but he’s got the gift of gab and comes up with some absolutely laugh out loud quotes.

Being flanked by ECW legend The Sandman and the enormous Tony Atlas, doing his best Zeus from No Holds Barred impression allows Jackie to up his intimidation factor immensely. Frankly, whenever these tough guys showed up I knew I was in for some fun. 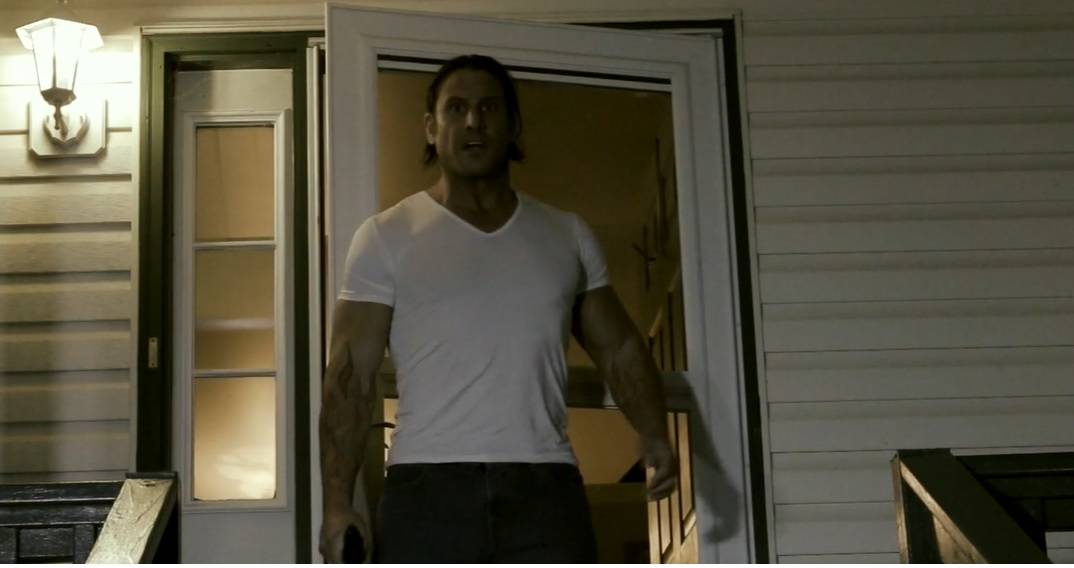 What’s not fun however is the attempt to make Rene Dupree an action star. Dupree’s character of Shawn is positioned as an ex-military man who is going to save his sister from the mess that her idiot husband, Owen has gotten her into. Dupree is a massively chiseled, hunky dude with zero screen presence and more than anything his scenes feel like they are just keeping the audience from the wrestling themed murder spree we were promised in the title. 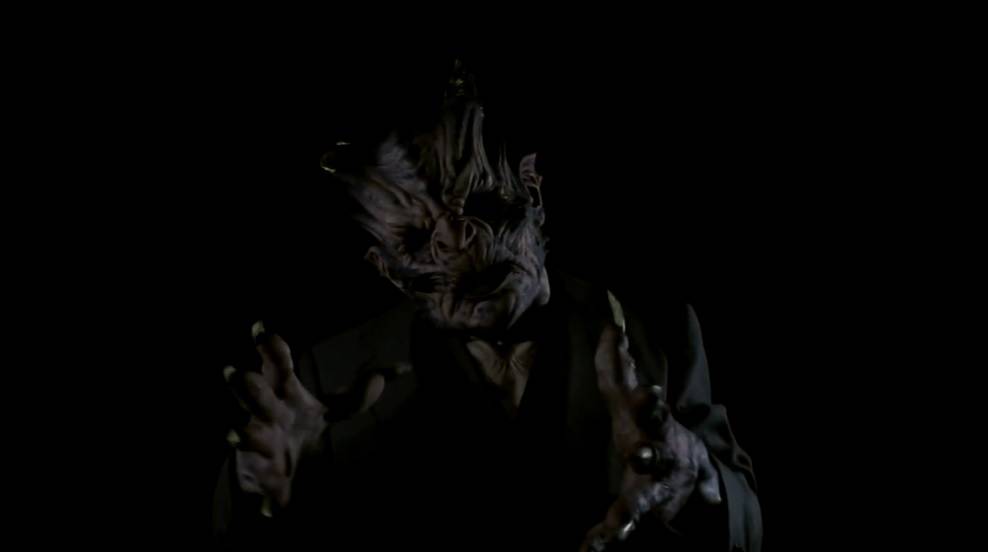 Randy’s scenes of slowly losing his mind are equally boring and repetitive, mostly finding Acevedo in conversations with future victims, explaining how he wants to be a wrestler like his Dad and then having them put down his dream. Oh and he’s somehow being brainwashed and empowered by a demon through the TV. Yeah, that happens.

Things finally get on track when after losing his job for spying on a client’s wife getting out of the shower, Randy decides to sign-up for Jimmy Valiant’s wrestling school. After being beaten in an exhibition match by the 77 year old Boogie-Woogie Man and laughed out of the ring by the other students, he loses his mind and the blood is finally ready to be spilled. 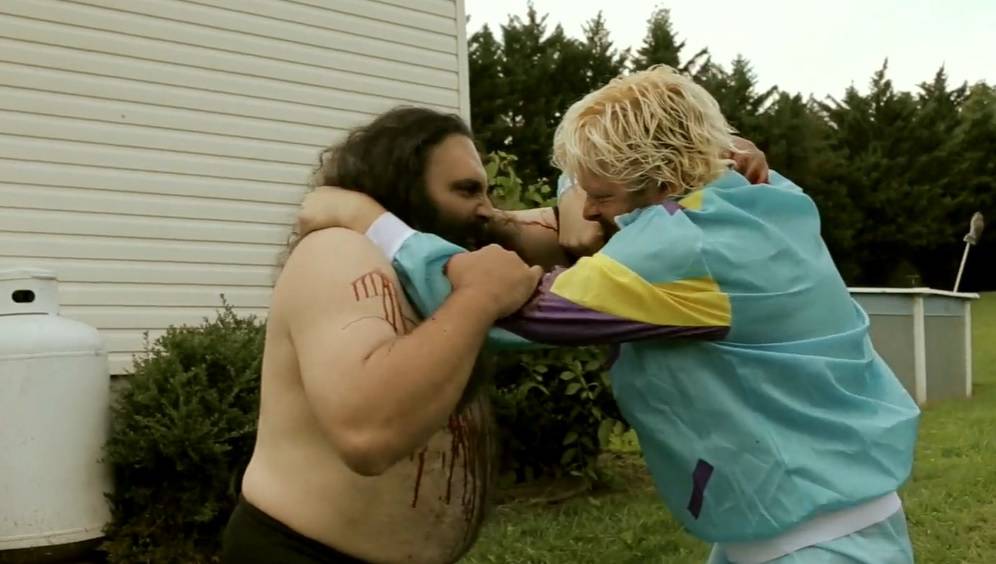 As Randy, dressed in his ring gear goes in for the kill against those who have wronged him, the gore effects manage to be repulsive and creative enough to get a reaction from the viewer. A murder montage set to generic heavy metal music finds Randy ripping out intestines or removing faces of random residents of the town with bloody results. While death scenes for the supporting cast with more screen time usually begin as backyard wrestling matches outdoors before Randy delivers a literal finishing move. 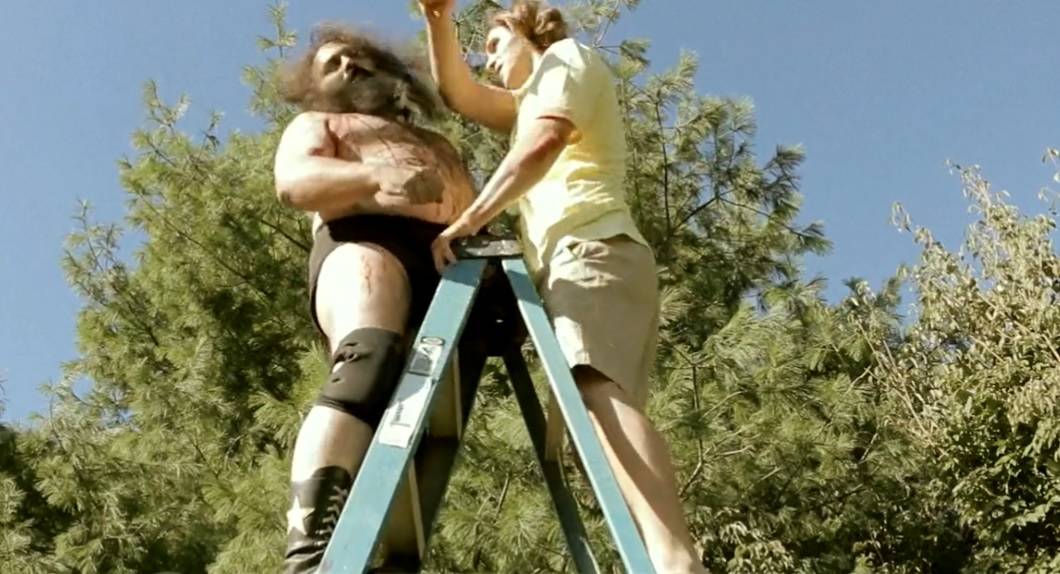 Overall WrestleMassacre is a lot like any pro wrestling program. Some performers will catch your interest with their skills on the mic, while others will dazzle you with their physical feats, but it’s rare that you are entertained completely from start to finish. It’s hard to call this a solid film, but it is definitely a spectacle. Plus there is the added fun of realizing that every character in the movie is named after a famous wrestling icon. Sid, Andre, Brutus, Torrie…the list goes on.

This is a must watch for wrestling fans who will be in on the joke and the crossover fans who love a good horror flick. All others will likely want to steer clear of WrestleMassacre.

Filmmaker Eric Mathis and his friends have been working on THE MACABRE,

Hex Studios, publishers and promoters of indie horror, have launched their own

For many people the holidays are a nightmare. But crowded airports, dysfunctional