It’s always interesting to see how games change and morph to become something interesting and unique, and that definitely applies to Tooth and Tail. For on the surface, it seems like a simple RTS title, but as you dive into it, you realize that this is a game of true management of resources, mixed with a deeply political storyline, and of course, is based on the animal kingdom.

I focused on the story mode myself, and boy was I surprised by how different this was compared to other RTS titles. In an opening cutscene, you hear about how your first general’s (as I call them) story, and hear how the animal Kingdom has basically gone mad with hunger, so much so that they’re turning on each other and those that fall on the battlefield become meat on the table. It’s pretty grim, but it also paints a clear picture as to why these factions exist, and why they’re doing what they do. You start off as Bellafide, the leader of the Longcoats. A man who lost his son to this madness and wants nothing more than to get revenge on those who did him wrong.

Now, while this may start as a typical “revenge” story, you’ll soon see that there’s some deeper notes and meanings in here. In example, Bellafide doesn’t want to rule, he just wants there to be an end to two of the other factions madness, in this case The Civilized and the KSR. He also doesn’t care as much about his army as you might expect, they’re basically fodder to him, which is appropriate, as a LOT of your units are going to die in this game.

The crux of the gameplay is very RTS like in that you have to build up an army and go to war against the other factions in order to survive. But, in a fun twist, the gameplay is rooted over the “currency” of food. You make Gristmills that provide food, and through that food you can grow your farms to get more food, and then build and grow your army. But, you need to pay close attention to this food, as without its numbers, you’ll never get anything. The factions all have different units, each with different costs to build the warrens they spawn from, and then to get single unit. It’s a lot to comprehend, and you’ll need to be of clear mind to get what you need to win. 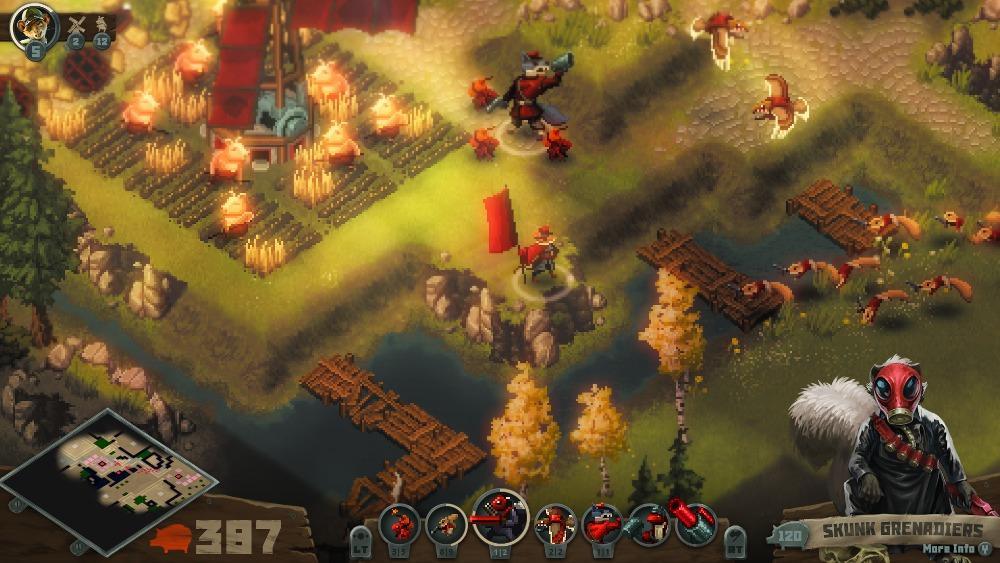 What’s more, the world map you’re on has the “Fog Of War”, meaning, you can’t see what’s outside of certain areas, so you’ll need to explore to find out what’s around you, and more importantly, where your enemies are. This leads to another interesting mechanic of Tooth and Tail, all the maps are procedurally generated. That means every time you fail, you get a new map, a new starting position, and a new quest to discover everything. You might think that odd for an RTS, but it actually adds to the depth of the title, because now you can’t memorize things and plan out what to do ahead of time, every battle requires its own unique strategy.

Which is a perfect segway to the objectives of the missions. Regardless of which faction you play as, there are a variety of missions for you to do. Most are destruction of Gristmills, but others are about survival, freeing prisoners, saving allies, and more. What’s more, there are special “Heroic” objectives that’ll keep you on your toes so you can claim even greater honor.

The visual style and music are very interesting. The game is rendered in a pixelated style, and yet there are beautifully drawn portraits of characters and units that go into incredible detail. For the music, it goes very Russian (which is the base of the language heard here as well as the story itself), and it fits quite well. The dialogue and voices we hear are very true to the nature of what’s happening in the story, and you’ll hear some very interesting conversations as you go through the game.

That being said, there are some flaws in this game that might bring some people down. For example, you play as the factions that are within this world, however, the transitions to them aren’t clean. In the first one especially, you play as Bellafide, and meet the Commonfolk general named Hopper for a co-op mission of sorts. After it though, suddenly you’re Hopper! And you’re now leading the Commonfolk and their units into battle. this was very jarring. Especially since each faction has its own unique units and strategies you need to employ. 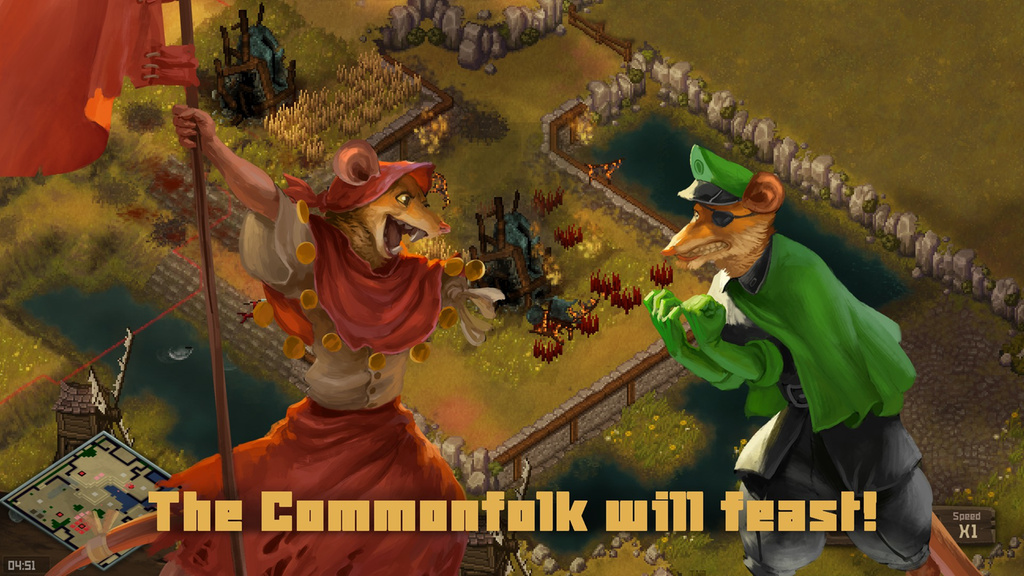 Speaking of jarring, the difficulty of the game will be a turnoff to some. The difficulty spikes and dips depending on the mission, and it’s very hard to tell what’s coming next, even when you see the mission objectives. A great example of this is when in one mission, you’re trying to survive for 6 minutes, it honestly wasn’t that hard. But then the next mission you didn’t have a farm, had pre-built Warrens, and had to rummage around for feed so that you could build your army, all the while protecting those three warrens AND destroying enemy Gristmills. That’s a lot to do with not much time before enemy units attack you.

The version I played was the Steam version, and though the control scheme was good, it was hard at times to remember all the buttons and motions I had to do with the mouse to get certain things done. I’m told the controller setup is better, so you might want to try out your options and see what works best.

All in all though, Tooth and Tail is a surprisingly deep test of strategy and skill that is paired with a story that isn’t to be missed. If you’re looking for a very unique RTS, look no further than this game.

Pathfinder: Wrath of the Righteous Dated For September 2

After the success of Pathfinder: Kingmaker, creator Owlcat Games is working on

Pathfinder: Wrath of the Righteous Launches Second Beta May 5

The classic tabletop RPG Pathfinder is coming to PC monitors…..again! After the