One of the most talked-about AAA multiplatform games is The Callisto Protocol. This mesmerizing SF Survival Horror transports you to a grim future we can only hope never comes. The game could be considered Deadspace’s spiritual successor. It’s a similar story, but instead of an artificial space colony, it’s set on the moon of Jupiter, called Callisto. Likely, this takes place in the future, when humanity has colonized other celestial bodies, such as the Earth’s Moon and Mars. Humanity’s space frontier has moved out to the Jovian moons.

Three of Jupiter’s moons—Ganymede and Europa—are hostile environments but suitable for human settlement. There are oceans beneath the icy surface of these three moons, which are nearly the same size as Earth. Callisto is the best candidate for human colonization because it has the lowest levels of radiation and water is essential for life.

Looking at the Sky at Callisto will be an amazing experience because you can see Jupiter  in the sky. 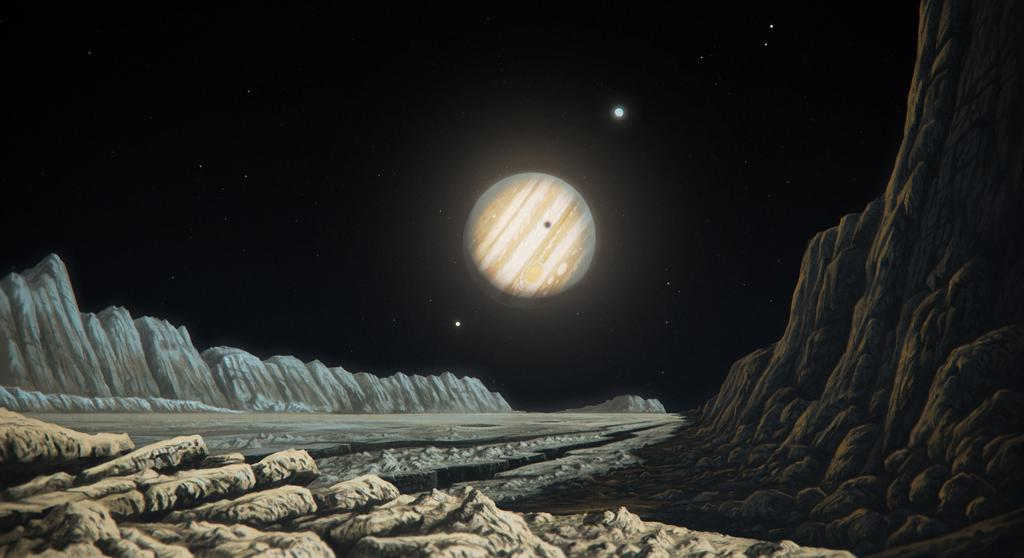 The year is 2320 and the Moons of Jupiter had been colonized by humanity.  The United Jupiter Company is the one that control the economy of the Jovian moons. They Built the  Black Iron Prison  at Callisto. It is not a great place to be, because it is more like a concentration for the criminals of the other Jovian moons.  The main protagonist is  Jacob Lee (Josh Duhamel)

While traveling to Callisto in 2320, Jacob was involved in a crash landing and mysterious cargo was on board. Jacob is just a regular guy who accepted this job because of the high pay, so he has very little formal combat training and was thrown into Black Iron Prison. As a result, he must now deal with nightmarish creatures called Biophage. They were once Callisto’s human population before being infected. He will meet Dani Nakamura (Karen Fukuhara)  who is the leader of a group called the outerway.  The two of them will work together for their survival in this monster infested space colony.
The Callisto Protocol will be released this December 2 in all current gen platforms except the Switch.

1923, A new Saga to the Yellowstone series Surprising Facts Revealed About The Guardians Of The Galaxy Holiday Special

Dead By Daylight Announces Portrait Of A Murder Update

Outbreak: Endless Nightmares To Be Expanded In 2022

I am throwing my money to the screen but nothing happens. This game has insane Death Traps. I don't think I've been this excited for a release since Cyberpunk, Resident Evil Village, or Huniepop 2. And the fact that you can fall victim to them just as easily as the enemies do gives you a whole new reason to be aware of your surroundings. In my head, I'm giving this game major hype because I'm a huge Dead Space fan as well.

Before ea forced them to ruin their last game, they kept their promise to improve the melee like they wanted in Dead Space. Dodging has never felt so satisfying as it does in Bloodborne. If you don't take care of the monsters right away, they evolve as you attack them, which is the ideal design. It's also ideal that they develop as you attack them. It's like watching poetry come to life before your very eyes just to watch that perfectly timed sway out of the path of a hit.

This game's gameplay seems to be quite enjoyable. The battle has a very life-or-death atmosphere. I'm looking forward to this because using your baton and other melee weapons to thwack enemies after dodging attacks will be very satisfying. This is the only game that has been released so far this year that I am actually excited about. It's also very exciting that this will be released right before the new year. I'm so excited to give this a try!

Sad it is not available on Switch

I appreciate that the developers maintained the artistic integrity of their game despite the fact that it was banned in Japan because they refused to censor the violence and gore (due to violent content). Because of the developers' bravery in standing up for the quality of their work above taking the simple route to profit, I'm now more interested in this game than I was before.

You know that feeling you get when you're really anticipating getting a game? similar to when you were a child. It hasn't happened too frequently lately, but this one is it. This feels like a cross between Gears of War and Dead Space; the combination of executions and deaths is stunning. Hopefully the story is intriguing as well. As expected, Glen and his team did a fantastic job.

This seems to be very good. My excitement for the upcoming fights is almost too much to handle! From what I've seen so far and based on this preview, I believe that Callisto Protocol's horror will be more akin to The Last Of Us' horror in that the terror will come from the idea that you're fighting terrifying monsters. I love the environments we've seen so far and the aura, but I'm ready for more action-based combat rather than the slow build of tension or just jump scares. Not that the game won't be spooky—I'm sure there will be some eerie moments—but the majority of the horror will probably be in the ways I mentioned. Again, this is not a bad thing because, for me, the combat in these "Resident Evil 4 Style" games is something I look forward to.

The main reason it's not "horrifying" is because I like how these enemies cautiously advance one at a time. Since two superhuman zombies attacking simultaneously in real life would be nearly impossible to deal with, and because the enemies move too slowly, the player has too much time to react, the story's sense of desperation is not carried over into the combat. I don't find this game scary at all.

This game appears fantastic. Given that it was created by Glen Scofield, it is obvious that it follows the same principles and has a similar history to Dead Space. I'll only say that I'm not entirely sold on the enemy design just yet. I believe the main reason for this is that, when measured against the necromorph designs from the Dead Space series, they have a very high standard to meet. In this entire genre, Necromorphs were among the best designed horror "enemies" in ANY medium. Everything about them, including how they appeared and how they varied. I have very high hopes that the quality will be the same here. I genuinely don't believe anyone does this genre better than Glen. The results are going to be spectacular if he has complete control over putting his vision into action.

I know it gets a low of Deadspace comparison but this game plays nothing like Deadspace. It is more like Resident Evil 6 in space.