The Street Fighter Universe is different from our World because it is set mainly in the 90s but a futuristic version.

90s technology is rampant in the Street Fighter Universe. Crimson Viper uses a Motorola/Nokia Oldschool phone on her entrance. The Video Games they play in this World still use cartridges. Despite the decade-appropriate technologies, some things are too futuristic for the 90s.

The Kanzuki family has a space colony, which does not exist in the 90s. 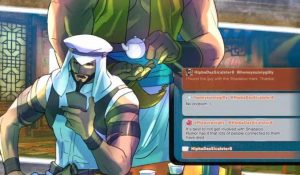 Shadoloo, the lore’s evil organization, has technologies not even our present decade has. One of the Reasons Street Fighter characters got stuck in the 90s is that Capcom is hesitant to age them. Street Fighter IV and V are midquels between Street Fighter II and III. In a way, it puts the Street Fighter Timeline in a Limbo.

Here is the correct canonical order of Street-Fighter Games.

Street Fighter is the first game in the series and the canon. Sagat was the Final Boss. The Game is set in 1987, which is the release date. Only Ryu and Ken are playable characters.  The Lack of Home console ports made this game a footnote in history. Ryu, Ken, Birdie, Gen, and Sagat are the only characters from this Game that returned in future titles.

This is during a time when Capcom have no confidence to age their characters because Japan had a Youth-centric culture. This prequel are the events before Street Fighter II.

Street Fighter II is the game everyone knows. The characters who originated from this sequel are called the World Warriors. It is the first Fighting game with Everyone that is playable, and we get to have Chun-li, the first lady of fighting games, because of this iconic seque

Street Fighter 4 is the Game that saved the franchise. The Game let go of the Hand-drawn sprites and for stylized anime-inspired 3d graphics but kept the 2d gameplay. It is a prequel to Street Fighter III despite being a more recent game.

Street Fighter V is the last of the midquels in the timeline. It aged teenage characters like Sakura and Karin into adults. It also fully connected the lore to Rival Schools, Strider, and Final Fight.

Street Fighter III was the most recent game in the game lore-wise but not anymore thanks to Street fighter 6. It is the first plot-line set in the late 1990s, when Ryu, Ken, and Chun-li are mostly in their mid to late 20s. The game almost killed the franchise by replacing most World Warriors with younger characters because it alienated Street Fighter II fans but it recovered in 3rd Strike because Chun-li is back.

Most of the World Warriors are aged because we are in a more open minded era. Chun-li’s adopted daughter Li-fen was already a teenager on this game. It will be the first game in the franchise that is out of the 90s. It is most likely set in the 2000s.

Loot: Maya Rudolph got dumped by her husband but the Divorce settlement is $87 Billion The Hunger Games: The Ballad of Songs & Snakes, Teaser of the Prequel