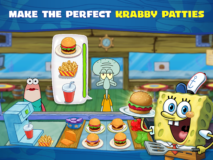 SpongeBob: Krusty Cook-Off lets players serve the delicious Krabby Patty to a cast of characters from the beloved animated series, SpongeBob SquarePants. Fans take on the role of SpongeBob and cook Krabby Patties in competition against other players. In addition to fast-paced cooking adventures, players can also customize their underwater kitchen, explore Bikini Bottom, and interact with SpongeBob SquarePants‘ charming cast of characters.

SpongeBob: Krusty Cook-Off will launch on mobile devices this winter. Players can pre-register for the game on Google Play and/or pre-order it through the App Store to unlock different platform exclusive bundles of prizes.

Octopath Traveler Is Back — On Mobile Anyway