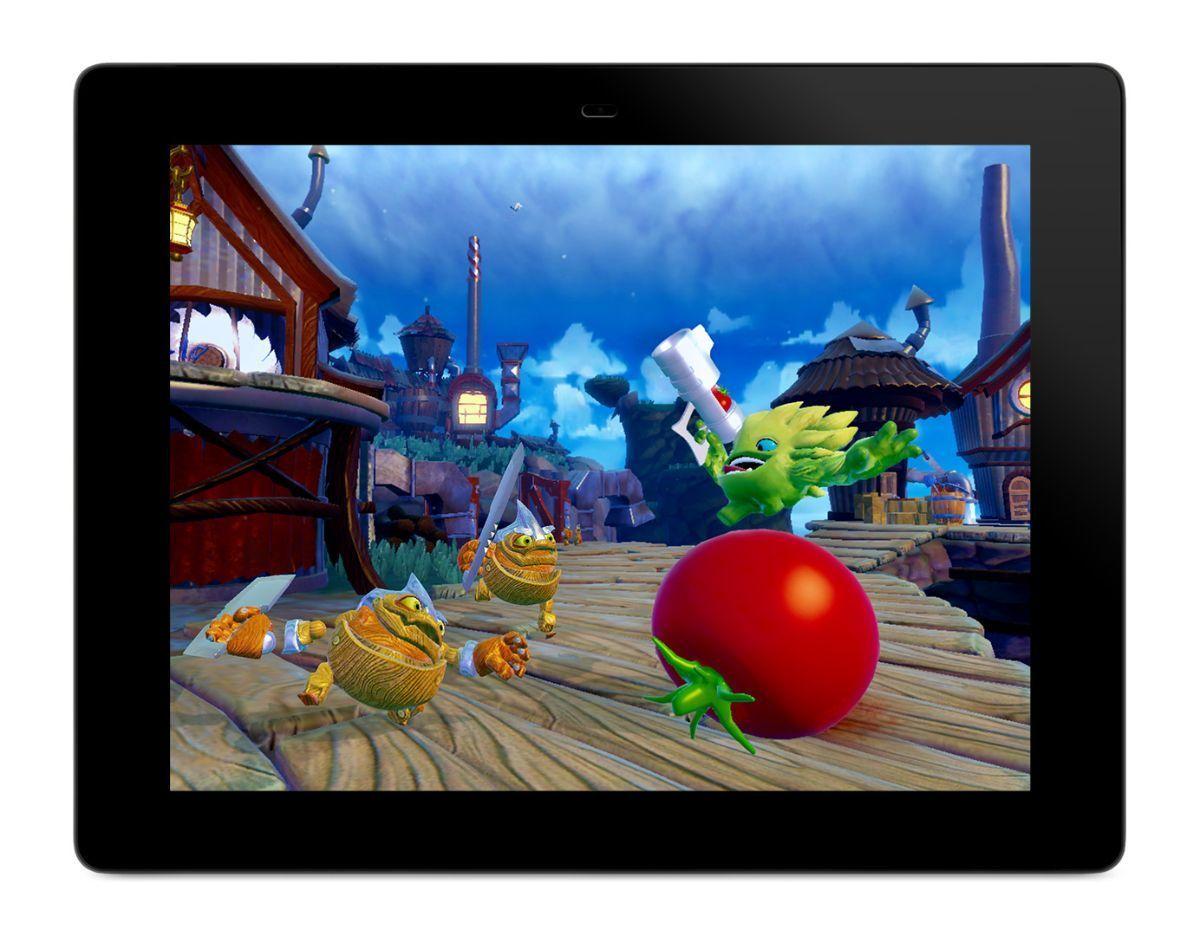 Whether this is your first or your fourth venture into Skylands, you’ll find Skylanders Trap Team’s story engaging and humorous with some legitimate laugh out loud moments. Skylanders Trap Team Starter Pack (Tablet Edition) plays just as well as its console counterparts. The portal peripheral’s poor battery life will diminish your gaming experience if it catches you off-guard. Those purchasing this edition of Skylanders Trap Team should consider investing in rechargeable AAA batteries.

Skylanders Trap Team is the fourth entry in the Skylanders series and is available for the PS4, Xbox One, PS3, Xbox 360, Wii, Wii U, Nintendo 3DS and tablet devices. This review covers the tablet edition, played on a 3rd Generation iPad.

Skylanders Trap Team Starter Pack (Tablet Edition) contains the wireless Traptanium Portal and game controller, AAA batteries for each, two Skylanders Figures, two villain Traps, a poster, trading cards, a tray for storage of the Traps and instructions on where to download the game for your device. A Device Compatibility Chart on the back of the box will help you figure out whether or not your iOS, Fire OS or Android device is capable of playing the game prior to purchase.

In Skylanders Trap Team, Kaos has exploded Cloudcracker Prison real good, releasing some of the most notorious villains in all of Skylands. Using Traps constructed from Traptanium, the material from which the prison was constructed, your team of Skylanders must set out to recapture them all. Once captured, villains are ready to fight for your team.

Skylanders Trap Team is absurdist and self-aware in its humor. It knows when it’s doing something simply in the service of pushing the plot forward and isn’t afraid to poke fun at it. By the game’s end, the writers have dipped into that well too often but the game is so close to over by that point that it doesn’t have the chance to detract greatly from your enjoyment.

The Skylanders games have always been humorous. But the writing team was really on in Skylanders Trap Team. Perhaps my memory has faded with time, but I don’t remember the humor being quite as clever. Trap Team contains legitimate laugh-out-loud moments that catch you off-guard with how sharp they are for a kids’ game. I do believe there was a moment where some townspeople laughed sarcastically at something one of my Skylander’s support team said. Skylanders Trap Team needs more Glumshanks, Kaos’ apathetic assistant. He’s not on screen nearly enough. I am sad to report that Trap Team is sorely lacking in Glumshanks.

If you’re playing only with the figures provided in the Skylanders Trap Team Starter Pack, be prepared to listen to a lot of Billy West. He voices Food Fight. If you follow animation or are otherwise a fan of voice acting, you’ll find a lot of familiar names in Skylanders Trap Team.

While Skylanders Trap Team includes the overarching musical themes that are familiar to the series, it branches out into new areas wherever possible. You’ll notice each captured villain has its own theme music now.

The game also features a minor addition of radios that are scattered throughout Skylands. Their inclusion is fun and not entirely useless from a gameplay perspective. Sometimes you’ll land on a station that provides you with a cash prize. Changing stations will play brief snippets of different genres of music. Those that I noticed included Motown, Big Band, 80s Pop, 50s and 60s Rock and an 80s Hip Hop beat that would be right at home in a Run-D.M.C. track.

As you capture villains during the course of the game, they travel with you and your Skylander via the Traptanium Portal and Trap crystal. They provide commentary, encouragement or make other remarks (sometimes self-deprecating). Sometimes your villains will speak over the start of other characters’ dialogue. Some players might find this annoying. Luckily there’s an option to turn the villains’ voice track down.

These are not the best graphics you’ll see on an iPad or Android tablet, but the sacrifice in resolution, textures and shadows allow for vast levels to explore, a lot of on-screen characters and moving background elements that add to the illusion of this as a living, breathing world. This isn’t to give the impression that the graphics are bad, but if you’re looking for Xbox One or PS4 quality graphics, you’re looking in the wrong place.

During the initial load of my characters on screen, there was a slight delay and skipping of animation. But this happens to me in so many other apps on my almost out of space iPad. So, I can’t tell if it’s a flaw in the game or my device. I’d recommend freeing up some addition space and closing out other apps regardless.

There are some rendering glitches throughout the game. The first time I played the musical rhythm mini-game, some of the important on-screen elements were missing, but I was never able to replicate it during subsequent plays. Trap Team doesn’t seem to use any advanced collision detection in the game. There are going to be times where your characters arms or weapons partially pass through other objects or characters on screen.

The character animation rendered in-game was better than I was expecting and even included some basic eye movements. Favorite villain designs included the Chompy Mage and Pain-yatta.

The Future of Skylands chapter must have been the design team’s favorite as it was particularly eye-catching and impressive. I wanted to see more of it because I like future/space things too. Among some of the cool things to be found in that chapter was a uniquely designed transport platform that moved like a spider across thin beams. Creepy thumbs up.