Sharkboy and Lavagirl are now married parents with a daughter!

Most people remembers Taylor Lautner as Jacob the werewolf and his shirtless screentime. Tween girls of the 2010’s see him as the rival of the sparkly vampire turned Batman then. I remember him as Sharkboy. Before he briefly dated Taylor Swift,He was saving the world with Taylor Dooley.Now they are reprising the roles that started their careers again.Finally, Sharkboy and Lavagirl are back and they are all grown up. The heroes of Adventures of Sharkboy and Lavagirl 3d are back as parents. A group of Aliens kidnapped the superheroes of our planet so the world is danger. Their children will be the ones who will protect us from the invaders. They have a daughter and she is a superhero too. She seemed to have the powers of her dad.

The sequel we never wished but we actually needed.

The CGI of this flick is very dated but I don’t mind. It looks like it is from the early 2000s but that adds charm for this. It gives you warm fuzzy feelings of the early 2000s. My only disappointment is that the two Taylors are only here for a special appearance so that saddened me. Unfortunately, this movie will focus on their daughter and a group of child superheroes.

The before and after comparisons makes me feel old. Imagine how fast the time is. Dooley was Taller than Lautner but thanks to Puberty he caught up. 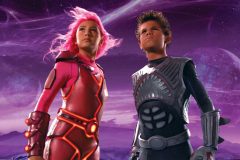 The cast of the film consists of YaYa Gosselin, Pedro Pascal, Priyanka Chopra Jonas, Christian Slater, Boyd Holbrook, Christopher McDonald, and Adriana Barraza. Robert Rodriguez will return as the director of this sequel.Rodriguez is known for the Spy Kids franchise as well. We are heroes will be available at Netflix this coming New year.