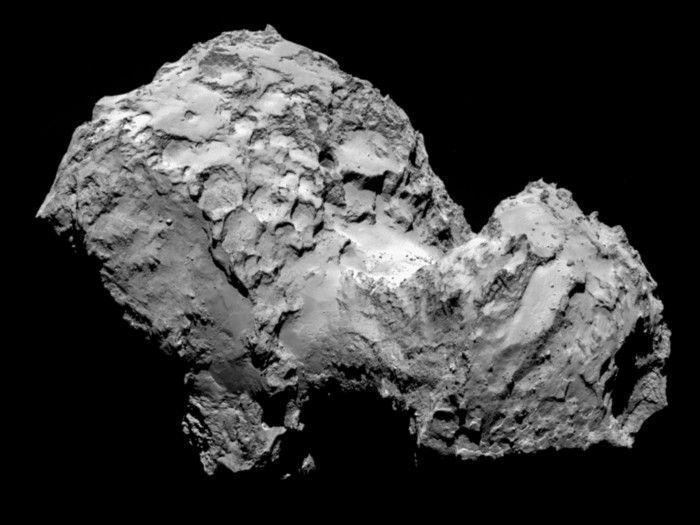 Today is a historic day for solar system exploration. The European Space Agency spacecraft Rosetta ended 10 years of sailing through the solar system to come to its destination, cosmic spitting distance from comet 67P/Churyumov-Gerasimenko.

Rosetta’s path through the solar system was circuitous, using three gravity assisted flybys of Earth and one of Mars to build speed and get on the proper course to meet the comet. But it’s finally there at the comet’s current location about 405 million km from Earth, or about halfway between Jupiter and Mars.

“After ten years, five months and four days travelling towards our destination, looping around the Sun five times and clocking up 6.4 billion km, we are delighted to announce finally ‘we are here’,” says Jean-Jacques Dordain, ESA’s Director General.

“Europe’s Rosetta is now the first spacecraft in history to rendezvous with a comet, a major highlight in exploring our origins. Discoveries can start.”

Comets are thought to have possibly helped ‘seed’ the Earth with water and maybe even life, but there are many unanswered questions about what they are and how they are made up that this up close and personal look will help to answer.

The Rosetta mission has been in the planning and discussion stages since the 1970s, and the last few weeks were the touchiest and riskiest part as the spacecraft performed several maneuvers to match the speed and trajectory the comet so it didn’t simply fly past and scrub the entire effort.

Fortunately, those maneuvers went as planned, and Rosetta is now about 100 km from the comet. It plans to orbit it at as close as 30 km and, by November 11, send its Philae lander to its surface to study the comet as intimately as possible.

“Over the next few months, in addition to characterising the comet nucleus and setting the bar for the rest of the mission, we will begin final preparations for another space history first: landing on a comet,” said Matt Taylor, ESA’s Rosetta project scientist.

“After landing, Rosetta will continue to accompany the comet until its closest approach to the Sun in August 2015 and beyond, watching its behaviour from close quarters to give us a unique insight and realtime experience of how a comet works as it hurtles around the Sun.”

Fossil Clues Point to Theory That All Dinosaurs Were Feathered