The Ten Most Impressive DIY-Projects of the Avorion Community

The successful space game Avorion (by German indie team Boxelware) is still in Early Access on Steam.  However, it has already gathered an impressive following among core gamers. The community especially loves the ship building aspect of the game – so they decided to give a shoutout to ten of the most impressive DIY-projects of the Avorion players: 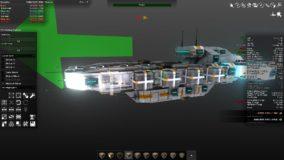 “New ships for all
The German User “Mächtiger Brankor” presents his new large ships, which consist of more than 8.000 blocks.

Avorion Brigadier
In this video, Avorion player “Black Disciple” shows in detail the construction of his self-designed frigate. Despite increased playback speed, the video has a length of 36 minutes.

Wonders of Workshop 2
“The Alien Ant” presents in this video his various finds from the Avorion Steam Workshop.

Super Massive Progenitor Class STAR DESTROYER
Avorion fan “The Sethioz Project” has built his own Star Destroyer. The result is a gigantic ship consisting of 47,285 blocks.

Chariot Carrier Blueprint
With the Chariot Carrier, “Enigmus1” shows a large support ship, which equips the fleet of the players with large crew and weapon capacity.

Spotlight of your creations
“Games Games Games” does not show his own creations in this video, but those of his active community.

Avorion Workshop Amazing Ship Design
“Shrike Gaming” took a trip to the Avorion Steam Workshop and presents a selection of different ships in this video.

Dreadnought Avatar – Ship Presentation
Once again “Mächtiger Brankor”: In this video he introduces his ship Dreadnought Avatar, which consists of 8,409 blocks and should provide Avorion players an all-rounder ship for the endgame.

In Avorion, players can build a simple ship in two minutes, but the community has also produced numerous complex designs that involve more than 50,000 blocks. Using these ships, players can explore the galaxy, mine resources, trade goods, or become the commander of an entire fleet, steering their armada through battles and wars like in a real-time strategy game.

The expected release date of Avorion is spring 2020.