The return of the Rock Band series last year, alongside the latest Guitar Hero, heralded the return of the music genre that was once a billion dollar industry. However, the bottom soon fell out of the plastic instrument market thanks to oversaturation. With new releases coming at a rate of more than one a year, the appetite for additional games simply fell away.

This has led Harmonix to take a different approach with Rock Band 4. Instead of releasing sequels, they are treating the latest instalment as a platform that can be built upon over time, getting rid of the need to develop new titles. This idea has seen the developer overhaul the original experience of the title into something that is almost unrecognizable to its launch version. The new philosophy also extends to their latest expansion. Rather than simply offer a host of new songs as they might normally have done, Rock Band Rivals is a piece of, rather expensive DLC, which introduces new features and gameplay modes.

First off, it is important to note that this expansion is geared towards the more hardcore and competitive Rock Band player. Although casual players will likely still be picking up the game, it is the advanced players that are playing regularly and buying additional songs, so it makes sense for Harmonix to invest in catering for that type of audience. Rivals is tailored to the type of person who is constantly trying to improve their score and climb up the leaderboards with their gold star performances. 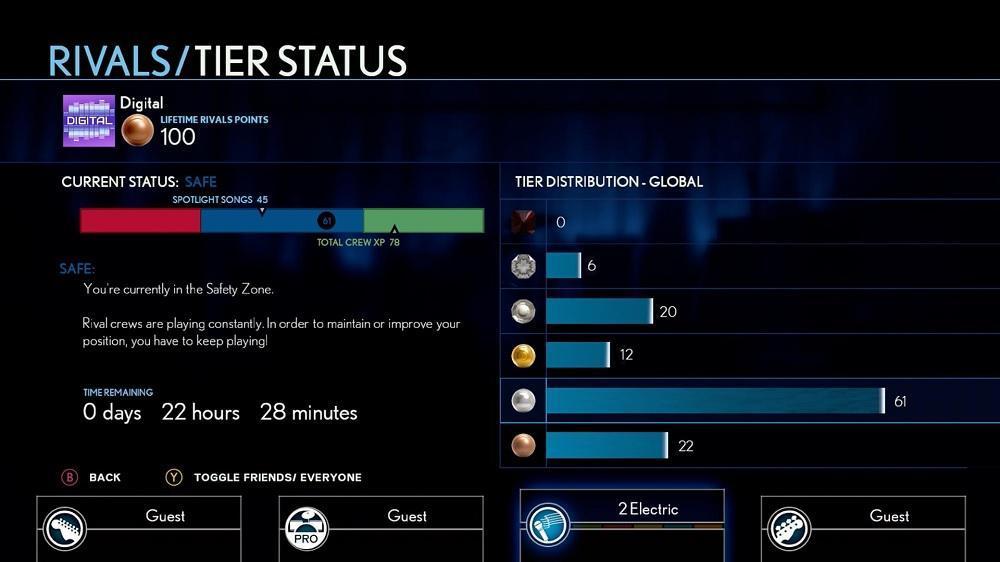 The expansion brings two distinct new modes to Rock Band 4. The first, and most important, is the Rivals mode. It is essentially a clan system that tasks users with getting into groups of up to 10 and then battling it out against other gangs to try to get as high on the leaderboard as possible. Weekly challenges offer the ability for crews to level up by being promoted to a new league after good performances. Failing to finish in a certain percentile, though, will mean that you are relegated back to where you came from.

The weekly challenges so far have been an interesting mixture. One simply tasked players with completing any of the songs in the library with an animal in their song title or artist name. Another involved songs that began with the letter “C”. These constantly changing challenges don’t just give you something to aim for but also give a compelling reason to explore some tracks that you may not have played all that much. It also helps you to give other instruments a try, as your score on every single instrument contributes to the cumulative total.

Essentially, Rivals adds a new layer of replayability to a genre that has seen very little innovation in the past decade. It is incredibly easy to find yourself playing the same songs over and over again as you try to get the best possible score or even giving the singing or bass a go to give that last extra push to see if you can get your crew promoted before the week ends. While this aspect certainly won’t appeal to the casual audience, those who are still putting serious hours into the game regularly will love this feature. 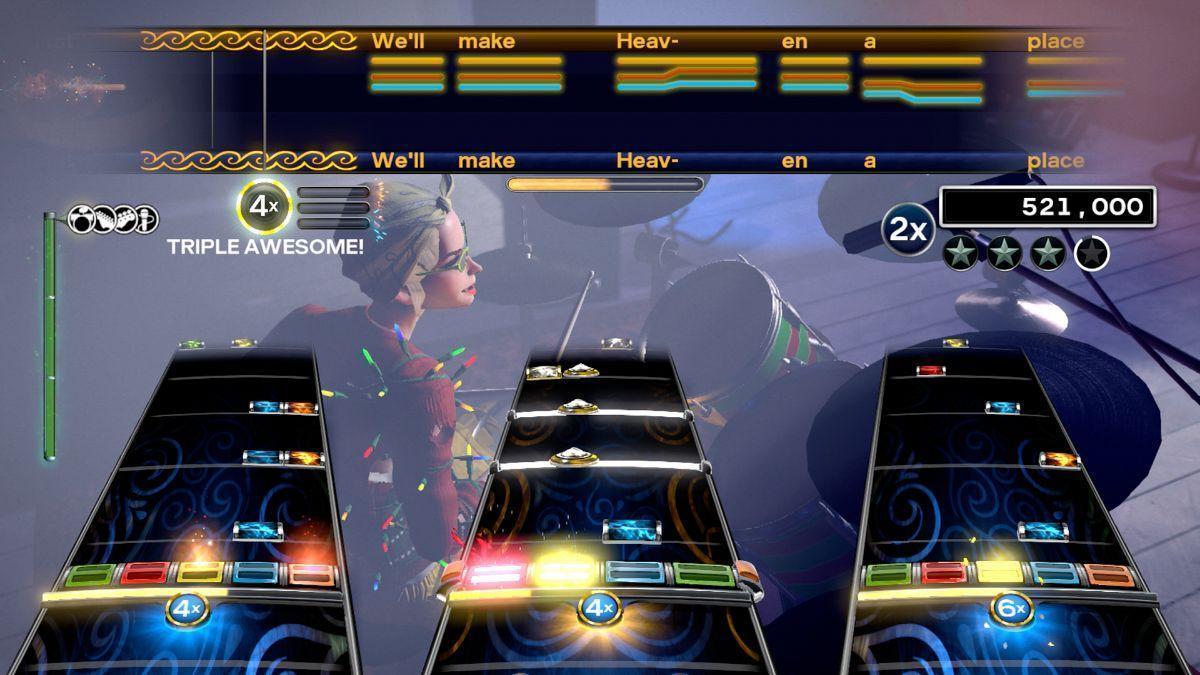 The other part of the expansion is the offline campaign mode known as Rockudrama. Unlike the tour mode currently in the game, Rockudrama is a more story focused experience that emulates the likes of VH1 music documentaries that tell the tale of where a band came from and what they had to go through to reach the top. Obviously, it was never going to win any awards in terms of plot as this is a music game, but the developers have still done a good job of injecting some humor into the various scenarios .

The career mode intersperses gigs that are made up of just three songs, with cut scenes with real life characters who are in some way connected to your band. They range from the silly to the witty and genuinely funny, but most can simply be skipped. The only other real change is that a wager system has been introduced, allowing you to bet on how well you think you will do in the upcoming songs and get extra rewards for meeting or exceeding expectations. Sometimes it will involve getting a particular amount of stars but in others will see you betting on whether you can beat a song on Brutal mode. It makes things a little more interesting that they otherwise would be and definitely adds some extra tension to performances.

One of the nicest additions to rivals other than the new modes, which has also arrived to the base version of the game via an update, is the ability to use an advanced filter ability to search through songs. You now have the ability to toggle between a wide variety of options, including the ability to filter between the sources of songs, how long they are, their decade, and even the rating that you have given to tracks. This is a very welcome change that makes searching through your library that much easier, especially when you have a larger number of songs. 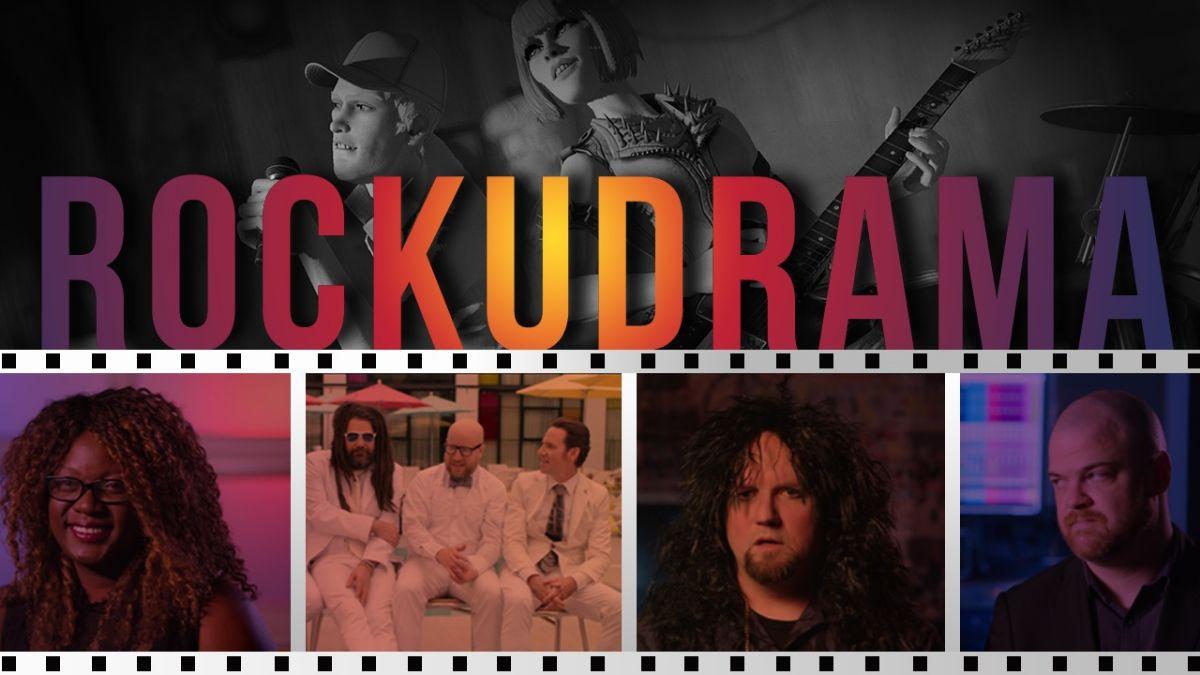 Rivals combines perfectly with the rest of the updates that Harmonix has released over the past year to create an experience that is so much better than anything that has come before it. Although the offerings for those who simply want to bring out the instruments every now and again at parties haven’t exactly been given a boost, the new features and game modes are ideal for seasoned players. The crew feature in particular adds a level of replayability not seen before and gives plenty of incentive to go experience on offer in Rock Band 4, whether it is your extensive library of songs or the instruments you usually don’t bother with.

This review is based on the Rock Band Rivals expansion pack, which was provided by the publisher for review purposes. The expansion is available now for Xbox One and PlayStation 4 priced at $29.99, $59.99 for the base game and the pack, $89.99 for the guitar bundle, and $199.99 for the full band kit.