With the release of Tales of Symphonia Chronicles (and a special Collector’s Edition) on February 25th in North America, I felt the time was ripe for a reflection of my favorite Tales game of all time. It will be a bit different from the normal type of reflection due to unique circumstances. 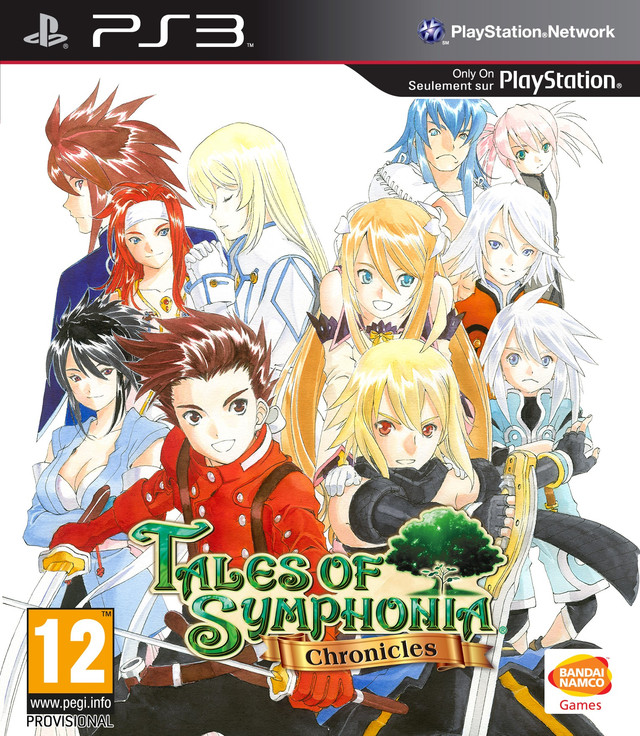 “Tales of Symphonia Chronicles” is a repackaging of the original “Tales of Symphonia” released for the Nintendo Gamecube and its sequel “Tales of Symphonia: Dawn of the New World” with HD graphics and some new animated cutscenes. It will also have dual audio, a first for North American editions of the Tales franchise, with both the English audio and Japanese audio being included (Namco Bandai has been coy as to whether the English dialogue is being re-recorded or being added to the game due to “unique” dubbing circumstances).

My path into “Tales of Symphonia” was decidedly weird. I had always wanted to play the game since the moment of its release but did not get the opportunity to do so until 2011, when I was gifted the game, sans gamebox and manual, used from Gamestop. I had already played “Tales of Vesperia” (and liked it), and “Tales of Legendia” (and hated it), but it was “Symphonia” that I had always wanted. As a long-time member of the “Golden Sun” fandom, “Tales of Symphonia” was frequently referred to in my circle of that fandom as the closest thing there has ever been to a 3D “Golden Sun” game, helped along by the fact that “Symphonia” was an Nintendo exclusive. It just made me want to play it more.

When I finally started the game, I was initially caught off guard, because the battle system was different from “Vesperia”. “Vesperia” allowed for full freedom of movement, but with “Symphonia” your movement is limited, you’re “locked on” to your opponent, and unless you switch opponents you’re running in a straight line towards and away from him, her, or it. It took some getting used to.

But quickly, the game charmed me. The earnest voiceovers became more sparse as the game continued but each time the characters came to life it was beautifully done. Kari Wahlgren put her voice in a lower octave than most of us are accustomed to hearing from her for Rainse, Jennifer Hale effortlessly transforms her voice into a teenage girl’s for Sheena, Cam Clarke brings out all of the wisdom and power of Kratos. Scott Menville is basically Scott Menville as Lloyd, and Heather Hogan shows inexperience as Colette, but every performance was charming in its own way. I looked forward to each and every conversation in the grand story.

And it was a great story. It’s more optimistic than you can expect to get from most games these days. There is death, there is a lot of destruction, and there’s multiple times when I thought I had just beaten the game only to find out that I hadn’t. There were some frustrating puzzles that took me at least an hour to figure out, there was a lot of accidental grinding due to indecision and wandering, but it made the characters stronger and allowed me to pulverize my way through most battles, including several of the boss fights which would have been more difficult if my characters had not leveled up as drastically as they had.

By the time I beat it, I realized I had not gotten what I thought would be the ending. Lloyd wound up with Sheena, when I expected him to be with Colette. I realized that my choices in the game are what ensured Lloyd and Sheena becoming a couple, instead of the expected relationship between Lloyd and Colette, since they were childhood friends. I realized that this Tales game, unlike Vesperia, had multiple endings, and I decided to find as many as I could.

I have found Colette’s. I have found Presea’s. I have found Kratos’. And I’ve found Raine’s as well (though that path made me feel uncomfortable after a while). I haven’t found anyone else’s yet but I am sure they are out there. Each ending you wind up getting is predetermined by your choices in the game, though the deciding factor is a conversation of the city of Flanoir. And it changes the ending in both dramatic and subtle ways.  It’s a wonderful ending in any case (other than the awkwardness of Lloyd and Raine having a romantic relationship, them being student and teacher).

I have not had the urge to play “Dawn of the New World”. Number one, that would require owning a Wii, which I don’t have and have never had. Number two, I have heard this is not quite as good as the original.

But “Chronicles” combines both games together, and I recommend the package anyway, if you’re a fan of RPGs, particular Japanese ones. The original game is a classic, and the Collector’s Edition contains some truly fantastic extras, including a full soundtrack and a novel that bridges the games.

I will pick this up someday. I don’t know when.  But I hope you do. You won’t regret it.